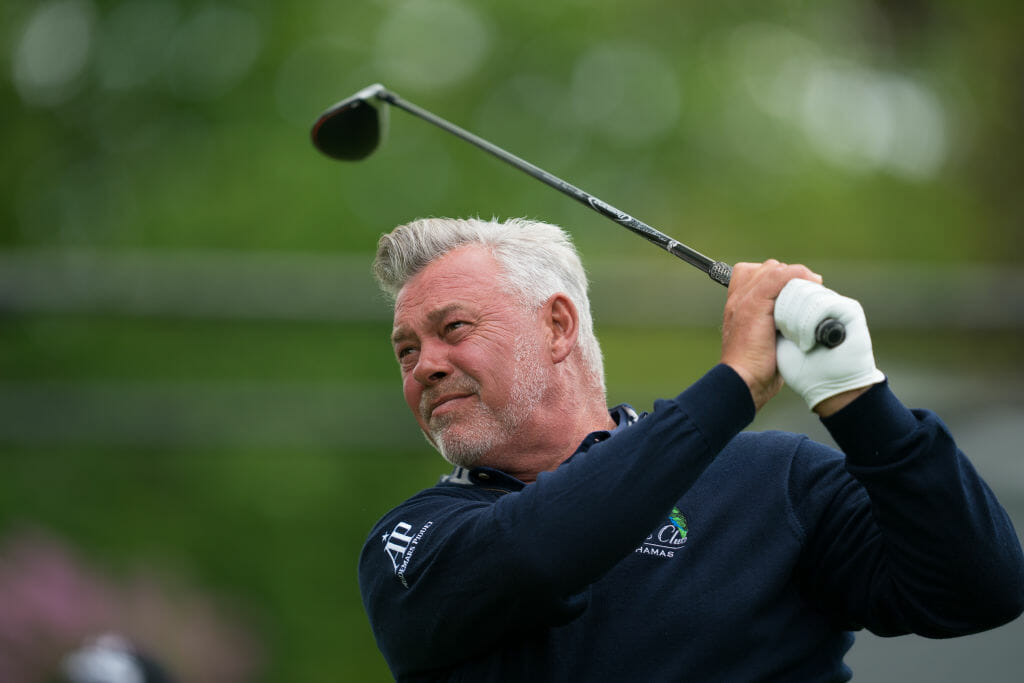 Darren Clarke is twelve shots off the lead at the KitchenAid Senior PGA Championship in Rochester but even so is in line for a strong finish as he heads to the final round in a tie for 20th position on six over par.

Clarke was already a winner this week though, having received the Walter Hagen Ambassador of the Game Award presented by The Country Club of Rochester, the venue for this weeks PGA Senior Championship.

The Walter Hagen Ambassador of the Game Award recognises individuals who contribute to the growth of the game, and in this case Clarke is contributing to that effort by introducing the game and its virtues to juniors through his foundation. The Award’s namesake, Walter Hagen, was the Country Club of Rochester’s first head professional as well as golf’s first Ambassador and Hagen brought the game to the youth of the world.

“To receive this Walter Hagen award is huge and huge for my foundation and the people back home behind the scenes. Everything works great but it’s the people behind the scenes that need all the credit for it, but it’s wonderful for the members of CCR to give me the first one, it’s very special”, said Clarke.

A permanent bronze sculpture of Hagen was dedicated at The Country Club of Rochester in 2008 and Clarke will be presented with an engraved watch similar to the one presented to Hagen by CCR members after winning the 1914 US Open.

Heading to the final round Paul Broadhurst faces a final day battle with two-time U.S. Open Champion Retief Goosen at the top of the leaderboard as he bids to defend the KitchenAid Senior PGA Championship.

The Englishman, who won his second Senior Major title 12 months ago at Benton Harbor, Michigan, carded his second consecutive bogey-free round on the formidable East Course at Oak Hill Country Club, moving to six under par as he matched yesterday’s total of 67, three under par.

An eight-time winner on both sides of the Atlantic since turning 50 in 2015, this is the first time Broadhurst has held the 54-hole lead heading into the final day of a Senior Major Championship.

“I’m obviously delighted. Another bogey-free round. It doesn’t happen very often back to back, especially around a course like this. A lot of it is because I’ve played sensibly. I haven’t necessarily gone at flags. Got a little bit fortunate on a couple of holes today. Made a couple of nice putts for par and managed another chip-in for birdie. Things were going for me front nine,” said Broadhurst.

Goosen, playing in his first season on the over-50s circuit after his milestone birthday in February, matched Broadhurst’s three under par 67 to move to four under par, two strokes off the pace and he commented;

“It’s been a while since I’ve been in this sort of position when the butterflies are flying a little. It’s been, what, 10 years ago when I last won a tournament. So it’s something you have to get used to and try and calm yourself down and find a nice rhythm out there and play well.”

Scott McCarron, winner of the Constellation Senior PLAYERS Championship in 2017, is fourth on two under par, while 2010 US Ryder Cup Captain Corey Pavin and John Riegger share fifth on one under par.