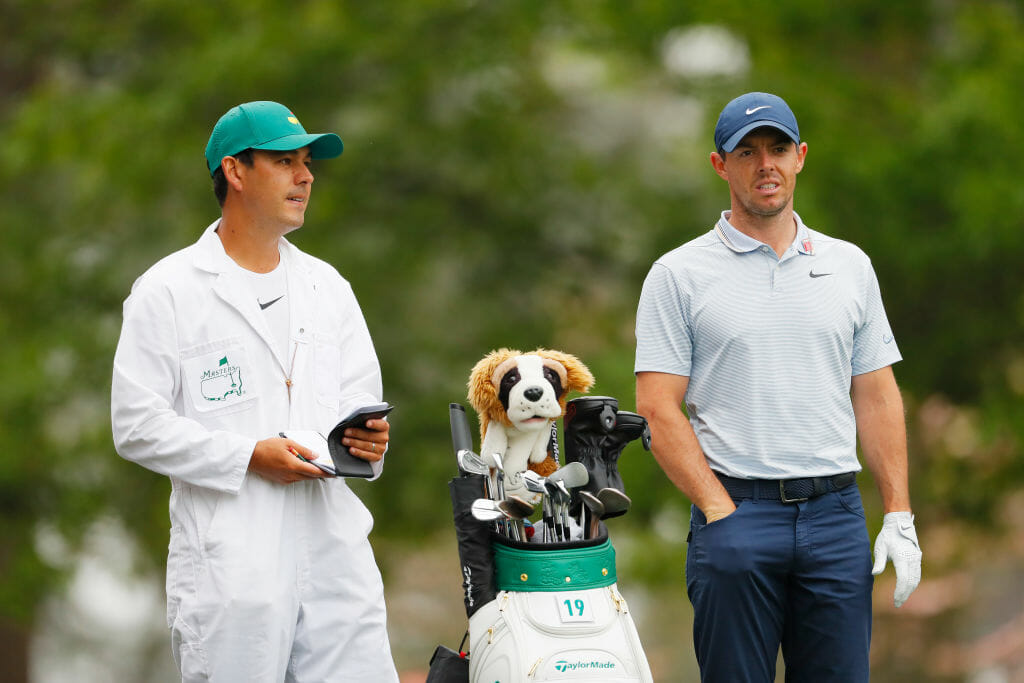 Rory McIlroy admits he and wife, Erica had tears streaming down their faces watching highlights of Tiger Woods coming ‘the full circle’ in capturing a fifth Masters and 15th Major title.

McIlroy sadly finished his own Augusta victory quest on the ninth green as Woods brought the sports world to their collective feet on the very close-by 18th in capturing to many disbelievers, the unthinkable.

The McIlroy’s were back home in the comfort of their palatial Bears Club abode in Florida when they finally got to watch Woods’ emotional march to his 81st PGA Tour title.

“Winning this year’s Masters was like Tiger’s career had come a full circle,” said McIlroy.

“Walking off that 18th green in 1997 and hugging his father, Earl and then 22-years later he’s hugging his kids, and everything that went on in between such as his great golf, bad golf, injuries, scandal and the whole lot was like it had just come full circle.

“People have now started to see Tiger as a human being again.

“I cried when he hugged Charlie and then in hugging his two children, as it was so emotional, and I think a lot of people … I was sitting beside my wife Erica and I could see the tears flowing down her cheeks … and it was just unbelievable.

“So, for me I felt like I was a 10-year old kid again watching Tiger win the Masters like I had done every year I had watched it.

“I recall having lunch with Tiger in Jupiter just over two years ago, and it was March 2017, and he coming off the back of another surgery.

“All he was thinking about was quality of life, watching his kids grow-up and being able to play soccer in the backyard, so his mind was not even on golf which sort of told me he was thinking that this could be it.

“Then from stories I heard from the Masters Champions Dinner at Augusta that year, he was saying also the same things.

“So, to think two years on and think of what has happened in his career is incredible and I feel like the surgeon who …. I don’t think anyone has ever interviewed him, have they?

“It’s just a big deal for Tiger to have come back from what he had to go through and I just don’t think people have really appreciated what he’s had to endure but then it just shows he’s gritty, he’s determined and they have always been some of his best qualities.

“For anyone involved in golf, whether you are a player or in the media, it was just great for our game in general and such a great day in Tiger winning another Masters.”

McIlroy returns to competition since his lowly T21st Masters result at today’s starting Wells Fargo Championship with the distinction of turning 30 on day three (May 4th) of the Euro 7,025m event in Charlotte, North Carolina.

McIlroy was two days shy of his 21st birthday in posting a blistering final day 62 to win what was a maiden PGA Tour title in 2010, and then 26 when he climbed aboard a second Wells Fargo victory stage in 2015.

“They say if you shoot 30 over nine holes, you are doing okay,” McIlroy said smiling.

“It’s funny turning 30 as I played in a practice round with Sam Sanders on Tuesday and he’s aged 31 but he’s got two kids, one who is 10 and the other five.

“Look, I’m not quite at that stage just yet but this lifestyle does make you grow-up quickly as I don’t feel 30, and I feel like still one of the younger guys but in my mind I’m not 30.

“It’s all very weird.  I don’t know what age I really am.  I was here when I was aged 20 winning at Quail Hollow but that doesn’t feel like 10-years ago.

“It’s just all weird as I do feel older in my mind but not 30 years old in body”.

What is very real though is that in turning 30, McIlroy is only the third player, after Jack Nicklaus and Tiger Woods, to have won four majors and 15 times on the PGA Tour.

In McIlroy’s three weeks away from the Tour, he’s also looked at video of his Augusta National showing, been down to the local Bears Club range while he’s had long-time coach, Michael Bannon over from Belfast.

“I’m excited to be playing again after a couple of weeks off and with a busy stretch coming-up, hopefully I can start off with a good tournament this week,” he said.

“One of the good things in having a few weeks off is that you have time to delve into a couple of things and the Masters app was a good thing as I could see every shot I hit.

“Even throughout the course of this year there have been ‘things’ that I have been able to manage but then you just let them go for a little bit too long and then you are faced with shots you are a little uncomfortable with and those bad habits are going to rear their heads whenever you don’t want them to.

“I had a few good days with Michael Bannon last week and we worked on a few things.

“So, I was playing for a big curve or a big miss and that has never been my game so we delved into that a little bit and also worked on a couple of mechanics.

“Suffice to say, I now feel a bit better about my game coming into this week”.

Joining McIlroy this week are fellow Irish players Padraig Harrington and the now in-form Seamus Power, who has the honour of being out in the first group.