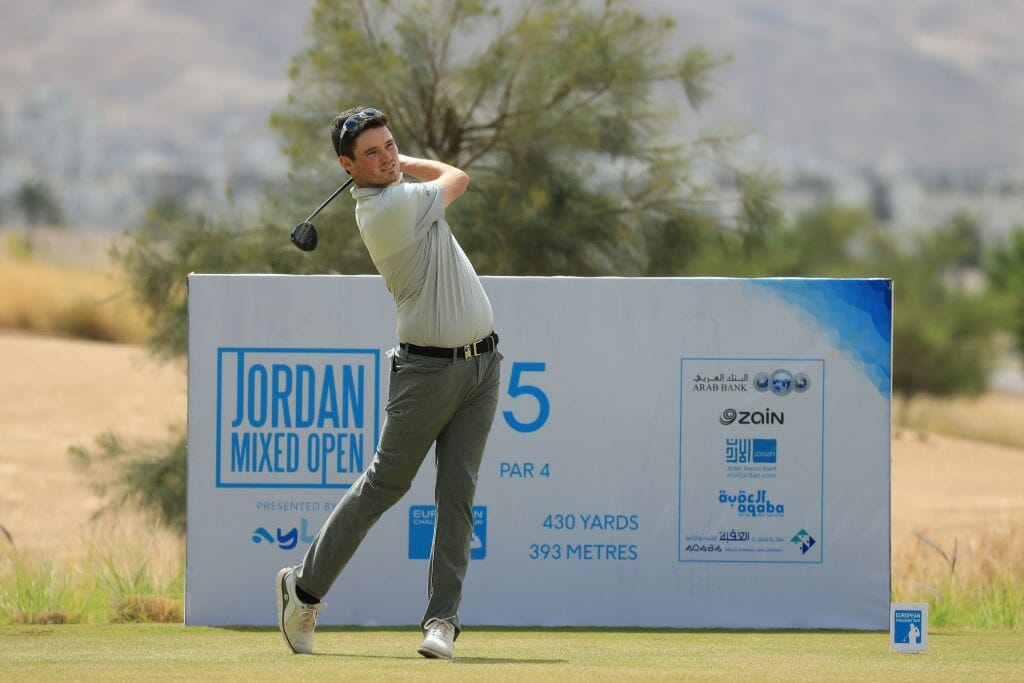 Hoey will go home much the happier after signing off with a four-under par 68 on Saturday. The man from Ballymoney collected €4,106 for a closing round that included four birdies and an eagle.

Unfortunately the scoring didn’t come as easily for Ardglass pro Sharvin who traded three bogeys and three birdies in an even par effort that left him alongside Hoey in a tie for 18th at minus-six for the tournament.

But where the Irish were fighting for scraps, Daan Huizing and Meghan Maclaren were fighting for history and it was the former who made it, becoming the first player to win a full-field mixed professional tournament with his triumph in Jordan.

The Dutchman began the final round at Ayla Golf Club two shots behind overnight leader Meghan MacLaren, who opened the world-first tournament with consecutive rounds of seven-under par 65.

MacLaren started the final day strong, carding two birdies on her first three holes, but Huizing was able to slowly chip away at the Englishwoman’s lead, and by the time the two golfers reached the 13th tee, they were deadlocked on 14-under par.

The stage was set for a never-before-seen battle down the stretch between a male and female golfer competing for the same first prize.

In the end, it was Huizing who came out on top as he converted three crucial birdies on the closing holes and signed for a four under par 68, which gave him a two-stroke victory.

The win was an emotional one for the 28-year-old, who admitted it was a tough off-season after he narrowly missed out on a European Tour card at the Challenge Tour Grand Final last year.

MacLaren finished the Jordan Mixed Open presented by Ayla alone in second place — two shots clear of Martin Simonsen, who matched the Ayla Golf Club course record with a final round of eight under par 64, which moved him 17 places up the leaderboard and into third place.

“I’m obviously pretty disappointed not to win this week, having been in such a good position, but it was still an honour to be here and represent women’s golf alongside two other great tours,” said Maclaren.

“It was pretty tight coming down the last few holes, so I think it was great entertainment for everybody watching.

“It was a great concept but none of us really knew how it would pan out. The way the scores panned out throughout the week showed that it absolutely can work with the right thought process and course set-up if people do the research.

“Female golfers have done ourselves proud this week and it’s been a great environment to be in with all three tours.

“It’s been an honour to be here and it was a great concept and one that I hope can catch on in the future. The research that went into it played out with the scores because it was pretty comparable across the three Tours so I’d like to see it happen more often.

“I think they did a great job considering that it was the first time that something has been done like this and I think that’s a great sign for the future.

“In some ways, it felt like just another tournament, trying to get the best score possible at the end of the week. It’s definitely interesting to have different golfers alongside us. There are things that the guys can do and we can’t but there are things that the girls do better than the men as well. It was definitely interesting and something that could happen more often.

“It’s not so much frustration as disappointment. It hurts, but that’s golf sometimes. Golf happened. I missed a couple of putts, which doesn’t help and hit a couple of bad shots at bad times. You can’t afford to do things like that. It can change so quickly and everyone who plays golf knows that.

“It hurts to not win, but I know, when I get home and think about it, I’ll be proud of what I’ve done this week and I hope that I’ve represented the LET and women’s golf in general as well as possible. It deserves a bit of a spotlight and if this kicks things up a bit, then I’m proud of what’s happened.

The Jordan Mixed Open presented by Ayla assembled 40 players from each of the European Challenge Tour, the Staysure Tour and the Ladies European Tour, plus three amateurs, into the same 123-player field and will forever be remembered as a game-changing tournament.

The final grouping was comprised of one player from each of the three Tours, and of the 66 players that made the cut, 20 represented the Ladies European Tour, 21 were from the Staysure Tour and 25 were from the Challenge Tour.

In addition, the back nine battle for the win between MacLaren and Huizing created tense drama all the way to the end.

Players from all three Tours were represented in the top five. The best performer from the over-50s contingent was José Coceres of Argentina who finished in a tie for fourth place alongside Challenge Tour players Jack Senior and Oliver Farr.

Thorough research was performed by tournament officials before the event began. Data on driving distance, approach shot distance, club selection and scoring was collected after each round, and will provide crucial findings to all three Tours.

The low-amateur competitor, Emilie Paltrinieri of Italy, carded rounds of 70-74-73 to finish the tournament on one over par.