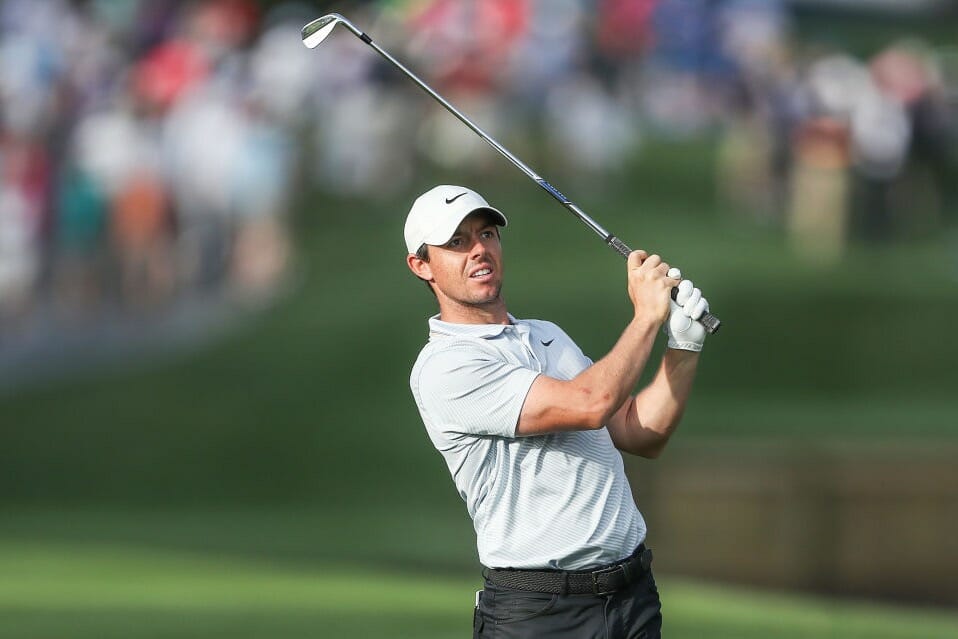 Rory McIlroy was ‘starved’ of a final hole birdie after his ball came to rest against a woman’s lunch bag en route to an eventual a bogey-free 67 on day one of the Players Championship at Ponte Vedre in Florida.

McIlroy’s second shot hit a sprinkler head in front of the green and cannoned-on some 40-yards beyond the flag at the par-5 ninth, the 18th hole of his round, with his ball coming to rest among spectators and up against the middle-aged woman’s plastic carry bag.

The Florida woman was informed by spectators not to move and was still sitting there with a ‘what am I to do’ look on her face when McIlroy and caddy, Harry Diamond, lugging co-incidentally a new golden crisps-coloured golf bag, arrived to size-up the situation.

A quick glance of the woman’s bag revealed sandwiches, cookies, crisps and a soft-drink in what was a real picnic scene around the green in the hot and humid conditions.

She was sitting on a collapsible seat placed on artificial turf with rules allowing the woman to move her possessions but with McIlroy now having to hit off the artificial turf.

And after the real likelihood of walking off with a sixth birdie of his round McIlroy instead had to settle for a two-putt par, including putt lipping-out, for a round of 67.

“It was just good solid play as I hit it well tee to green and I took most of the opportunities I was giving myself,” said McIlroy.

“I was pretty efficient around the greens when I did miss them so it was just a continuation of basically what I’ve tried to do all year.”

Unlike four days ago, McIlroy produced one of those effortless display so much a hallmark of his game to head to the clubhouse near lunch trailing just a shot behind victorious Ryder Cup team-mate, Tommy Fleetwood.

Fleetwood was just one-under through nine holes but then cut a swathe through the field in completing his inward nine in six-under that included a hat-trick of birdies to end his TPC Sawgrass round.

McIlroy joined American Brian Harman and Korean Byeong Hun An in second at six-under par and his round of 66 was just two shots shy of a Players best, a final round 64 to finish T12th in 2016 while Shane Lowry and Seamus Power have some work to do today after Lowry returned a one over par round to be in T86 position and Power came home in 39 strokes to negate some superb play on his front nine to sit on two over par and in T104.

Though it was another chalk-and-cheese display for McIlroy with the shortest club in bag having posted just 27 putts, including eight one-putts.

This effort compares to the 32 frustrating putts McIlroy took last Sunday at Bay Hill in finishing T6th but McIlroy’s shot of the round was clearly the birdie at the infamous par-3 17th than he was playing as his eighth.

The current World No. 6 pulled a wedge to land his tee shot to nine feet and then, to the huge delight of the fans, McIlroy rolled in the birdie putt to move, at the time, to three-under par.

He then birdied his 11th and 15th holes ahead of three closing pars before finding himself having to address the discussion post last week of not being able to close-out an event on Sundays.

“If I had had a better start last week — I shot 72-70 last week and had to play myself back into the tournament on Saturday,” he said.

“But I guess my thing is, like I haven’t held a lead going into Sunday in a while. I was only one back last week and I maybe was trying to rely too much on playing the par-5s well and sort of making my score that way, but it was a very difficult golf course, and I felt like that was the best way to approach it.

“I’d say the only Sunday I was really disappointed in this year was Kapalua, which is the first tournament of the year. Every other Sunday I’ve basically done what I’ve wanted to do.

“It’s a new week and that’s the great thing about golf. Everything is new, once you wake up on Monday morning, it’s a fresh start. It’s a new tournament. It’s a new opportunity.

“That’s the nice thing about our game, which doesn’t happen in some other sports, and it’s nice to take advantage of that luxury.”