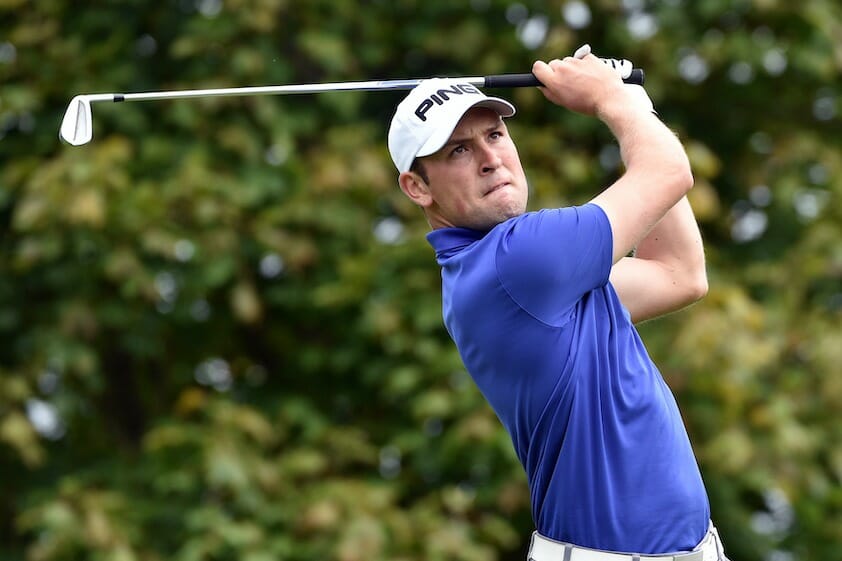 Jonathan Yates’ sole focus tomorrow will be winning at the first time of asking having played his way into contention at the opening event of the Alps Tour Winter Series- the Ein Bay Open near Cairo.

The Naas professional has been mourning the loss of his great friend and roommate, Conor O’Rourke, who was forced home through injury last week but he looks to have swiftly moved on from his sorrow in firing a superb 66 to propel himself up the Egyptian leaderboard.
“It is very spacious here since Conor’s gone,” laughed Yates before a sombre tone kicked in when thinking about his friend’s misfortune.
“I am really disappointed for him. Obviously, we’re both very close, have been for a long time but it’s never nice to see anybody injured like that – not able to play – but I suppose it’s that bit harder when it’s someone you’re close to.
“But he’ll be fine, his attitude was fantastic the whole time he was over here. He gave it everything he could to get it right and he’ll be back on the course in no time.”

Now sharing with Dubliner David Carey, the two boys panning out across three rooms in their lofty Egyptian hotel, Yates is swinging freer than ever and finds himself just three shots off the lead in a share of 5th at seven-under par heading into the final day.
“Myself and David have played late/early over the first two days and that’s been the trickier side of the draw,” said Yates.
“Yesterday afternoon was very windy while today was a gorgeous day. Usually around midday the wind picks up but it didn’t really get up at all today, maybe a half a club wind in the afternoon so the other side of the draw was definitely the one to be on, but then, I’m just glad to have posted seven under for two rounds.

“I wasn’t really too focussed on my score to be honest. I’ve just been plugging away. Had a great chat with Gavin [Lunny – coach] last night. I played something awful yesterday; didn’t really feel like I had too much control and I didn’t make any putts but I managed to grind out a one under and went out today with a good attitude – made a couple of small changes, a little set-up change and I started solidly.”
With confidence restored, the Kildare man carded an eagle and six birdies in an accomplished display and with just three shots to make up on the leaders, his sole focus now is to put as much pressure on those ahead as possible and see where it takes him.

“I’ve put myself in a good position for tomorrow and I’m really looking forward to it. I kind of feel like I have nothing to lose. I’m not really doing anything bar playing to win so I’ll go out and try and hit the best shots I can in each situation and whatever happens, happens.”
With the cut to the first 40 and ties falling at three-under par, Yates was the only Irishman to advance with Simon Bryan (74/68 -2), roommate Carey (76/67 -1), Michael Dallat (76/68 even) and Peter Dallat (69/78 +3) all missing out on the final day’s play.
Click HERE for full scoring