McIlroy eyes strong finish in Riviera ahead of WGC Mexico 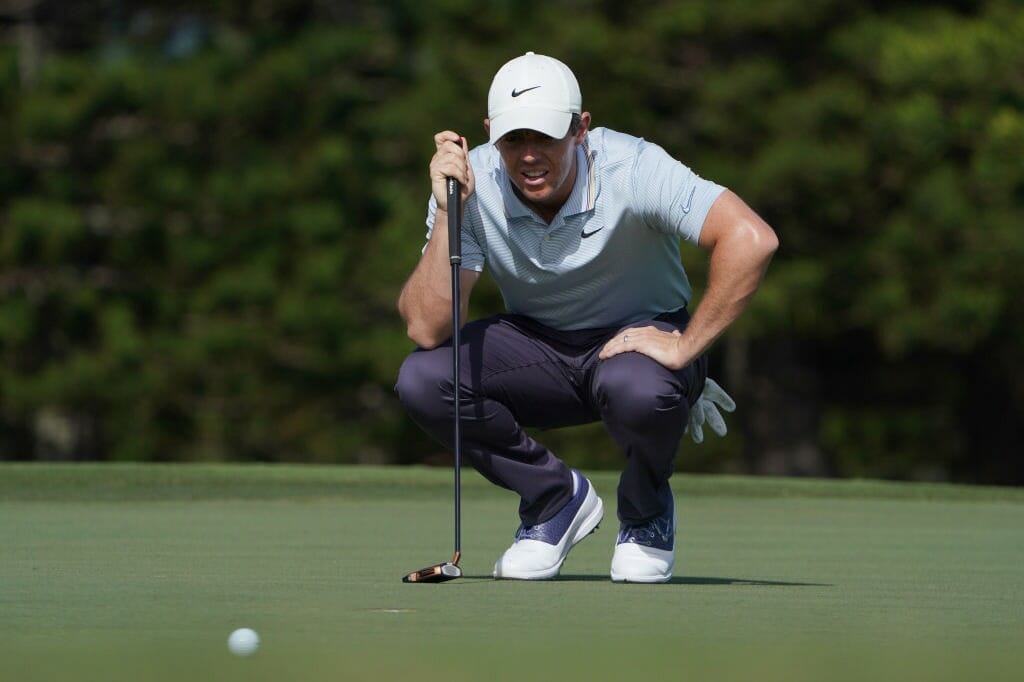 Rory McIlroy had just 30 minutes to grab a quick bite before heading straight into his final round of the rain-affected Genesis Open at the Riviera Country Club.

McIlroy sprinted-up the 53 stairs at the back of the 18th green to end his third round with a two under par 69 and be lying fourth at nine-under par. McIlroy was tailing eight shots behind the tearaway Justin Thomas who posted scores of 66, 65 and 65 to end the third round leading by three shots at 17-uinder par.

“A lot of birdies but far too many bogeys,” said McIlroy.
“Hopefully, there’s a low one in the bag for me to take to Mexico as that would be nice.”

However, McIlroy proceeded to drop shots at the fourth and sixth holes before holing a 18-footer at the par-4 eighth hole.

He headed into the inward half birding the par-5 11th for a first occasion in the week and with McIlroy then finding the green in two at the par-4 12th where ‘Bogart’s Tree’, and named after Hollywood legend, Humphrey Bogart guards the left front-side of the green.
McIlroy holed the 14th footer and then moved to three-under for the round when he sank a monster 41-footer at the par-4 14th.

Then was disaster at the par-4 15th when McIlroy’s tee shot got caught under the lip of the a fairway bunker from where he could only advance his second shot some 50-yards that came to rest in a ‘native’ area.
McIlroy could then only advance his third some 40-yards on route to a double-bogey.
He pared 16 and then for also for a first time this week, he birdied the par- 17th hole ahead of the anguish of leaving his birdie putt on the last, right in the jaws.
Then after an energising brief lunch he was being introduced on the first tee to kick-start the final round.

Seamus Power had ended his round around an hour with a three-putt bogey on the ninth green and just as Tiger Woods was teeing-up on the 10th to commence his final round.
Power had played just two holes in the company of Sergio Garcia and Ernie Els.
The West Waterford golfer indicated it was a first occasion in Garcia’s company while he had played along the four-time Major winning Els in Las Vegas.
And while there was the relief in finally ending a horror run of seven missed cuts there was disappointment for the very affable Irishman in posting a 75 that included four birdies but also six bogeys and a 16th hole double bogey where Power had to chip out sideways from behind trees right of the seventh fairway he was playing as his third last.
Power dropped six places to be now two-over par for the event before re-joining his Major winning partners for the last round.

“The course played easy enough this morning but my it’s my personal game is very tough,” he said.
“It was good to finally being playing all four rounds but I am just fighting with myself at present and it’s not nice.”
Power indicated he is not contesting this week’s Puerto Rico Open, and up against the WGC – Mexico Championship as he’s not a fan of the host Coco Beach course at Rio Grande.

He will next tee-up in next fortnight’s Honda Classic at PGA National in Palm Beach Gardens.