McIlroy turns it around at rain-drenched Genesis Open 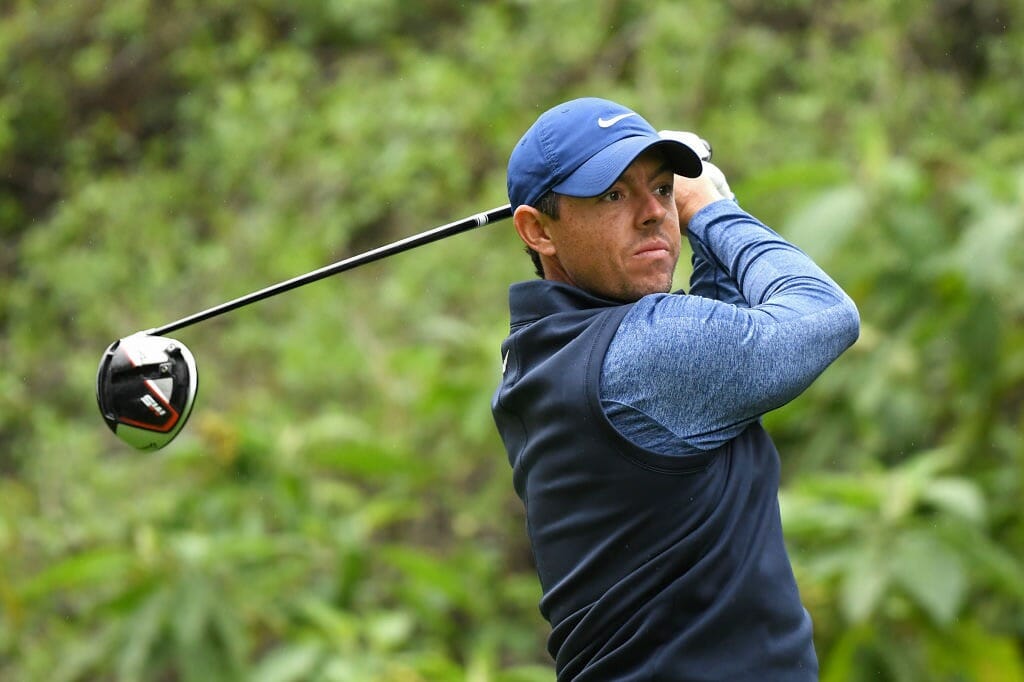 Rory McIlroy had less than 12-hours between ending Friday’s rain-drenched play and returning to the course to complete his second round of the Genesis Open at the Riviera County Club.

McIlroy had completed 12 second round holes when play was halted at 5.20pm local US time, with the World No. 9 having moved up from outside the cut mark following his opening one-over par 72 to be four-under par for his round and three-under par for the $US 7.6m event.

McIlroy had just 45-minutes in ending a poor 35-putt opening first round display before having to tee-up in his second round and went on to birdie three of his opening four holes. He then, for a second occasion, birdied the par-5 first hole that he was playing as his 10th, to move to three-under and had just two-putted his 12th hole, the par-4 third, when play was halted.

By the time McIlroy and his caddy, Harry Diamond made their way up the steep staircase at the back of Riviera’s 18th, darkness had virtually descended and all players, including playing partner Justin Thomas (five-under for his round) along with Aussie Adam Scot (five under also for his round), who were tied for the lead at 10-under par, were informed their second rounds would restart at 7am Saturday local time.

Jordan Spieth, the official first round leader in shooting a seven-under par 64, was not due to commence his second round to 8.22am local time Saturday and barring any further rain, officials will play the third and fourth rounds off both the first and 10th tees to ensure a hopeful Sunday finish.

McIlroy stood outside the Riviera Ladies locker-room, where photos adorn the walls of Hollywood legends and Riviera members, Katherine Hepburn, Elizabeth Taylor and Mary Pickford, removed his water-proof trousers given a meeting room within the Ladies Locker Room is again being used as the official scorer’s room, and he spoke of his delight in managing to turn around his game that saw him leap from a share of 110th to a now tie for 23rd.

“It was a good turnaround to start my second round as I didn’t play too dissimilar this afternoon than I played this morning,” he said.

“I just managed to get a couple of more putts to drop early on and that was pretty much the key as I didn’t birdie the two par-5s on the back nine and my outward half this afternoon.”

“But then I have birdied the first both rounds and that’s nice. I’ve hit some good shots, converted a couple so it’s now an early start tomorrow and another funny day, so I’m hoping now to pick-up a few more birdies in the holes I have to play.”

“We then have to wait for all those boys to finish their second rounds and see where we finish-up in terms of playing tomorrow.”

“I feel as though I’m back into the event, so a few more birdies in my last five holes tomorrow morning would be very nice.”

Having lost seven hours to play Thursday and with continued rain, the golf course is a real mess for spectators with motorised golf carts having turned grass pathways into mud and it will continue to be a ‘preferred lie’ for players no doubt for all four rounds.

“The conditions are really tough and with further rain, the course just gets so long,” said McIlroy.

“It gets so cold out there too and this afternoon was also dark and it’s just got dark so quickly since they sounded the siren. So, trying to read the greens was a little tricky.”

And what then did McIlroy do with himself on Thursday – Valentine’s Day – when for a rare time at a tournament he did not venture anywhere near the golf course?

“I just chilled and had a nice day which was a bit of a bonus given it was Valentine’s Day, so I got to spend quality time with my wife, and that was it,” he said smiling.

Seamus Power, in his first Genesis Open showing. had been sharing 52nd place following his opening score of 70. He was two-over par through eight holes of his second round but turned that around within two holes in first holing a four-footer for birdie at the short down-hill par-4 10th and then brilliantly holed a 131-yard third shot for an eagle ‘3’ at the par-5 11th.

Power then dropped a shot at 15 and with three holes to play was right on the expected cut mark sharing 55th place at one-under.