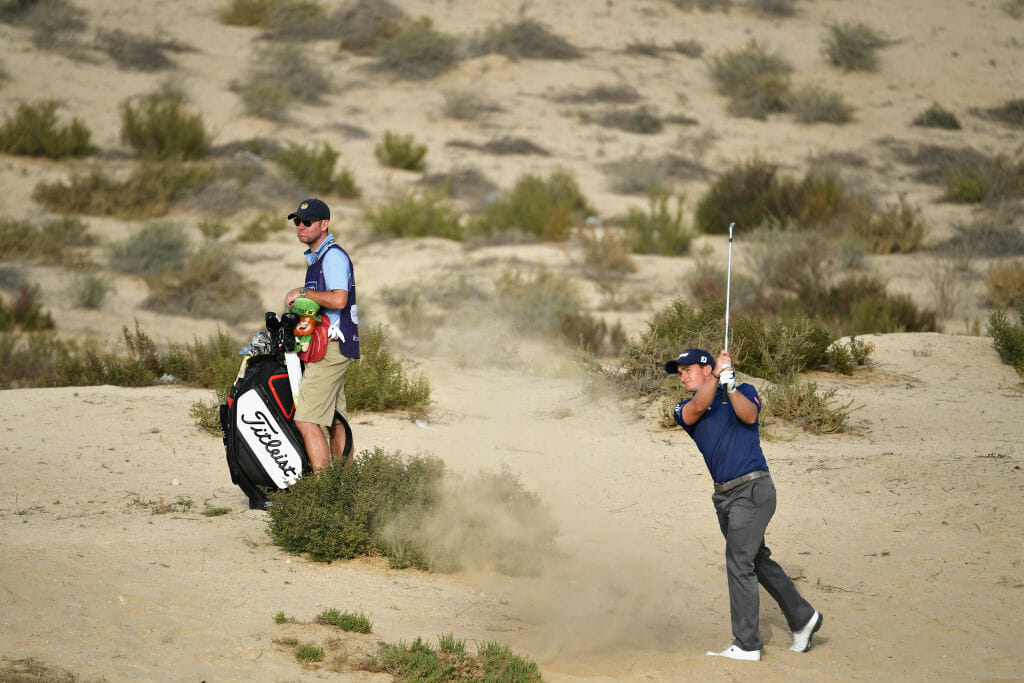 Paul Dunne ended a two-event desert dry spell to guarantee himself a first pay cheque of the new season after making the cut in the inaugural Saudi Invitational.

Dunne added a one-under-par 69 to his opening 68 to move into a share of 18th place at three-under par on the Royal Greens course.
The Greystones golfer was going along nicely having birdied two of his opening three holes before a bogey at his seventh hole was compounded by taking a double at his 12th.
Dunne, who had missed the cut in both Abu Dhabi and Dubai, soon settled to birdie his 13th and 16th holes to guarantee his place over the weekend. A delighted Dunne took to twitter with the following ..

At the top, American and former World No. 1 Dustin Johnson muscled his way to a three-shot leading cushion with a new course record 61 for an 11-under par tally.
‘DJ’ grabbed an eagle and seven birdies in an intimidating display on the course laid out along the Red Sea.

“It was a very good round,” reflected an almost visibly pleased Johnson!
“I played really solid all day and gave myself a lot of opportunities. I was just trying to keep getting my score lower and lower. I like the golf course.
“I’m driving it really well right now, so if I keep hitting it in the fairway, I’m going to really like this golf course.”

Sharing second place at eight-under par is South African Zander Lombard (67) and China’s Haotong Li (65), the player at the centre of last Sunday’s controversial ruling on the 18th green at the Dubai Desert Classic.

While nearly 20 years to the day that Tiger Woods employed Phoenix Open fans to help him move a large boulder blocking the path of his intended target, triple Major winner, Brooks Koepka did the same in Saudi Arabia.
Koepka’s tee shot at the par-4 15th came to rest behind a large rock on the desert-like course and so, as Tiger had done in the 1999 Phoenix Open, Koepka got a little help from his friends to move the ‘loose impediment’.

While just like Woods, Koepka did not at any time assist or touch the boulder. He went on to bogey the hole and shot an even-par 70 on Friday to survive the cut.
Missing the cut, remarkably for the first time in a regular tournament since the 2011 Hong Kong Open was World No. 1 Justin Rose with scores of 70 and 72. The missed cut comes less than a week after Rose captured a 24th pro career win at Torrey Pines.