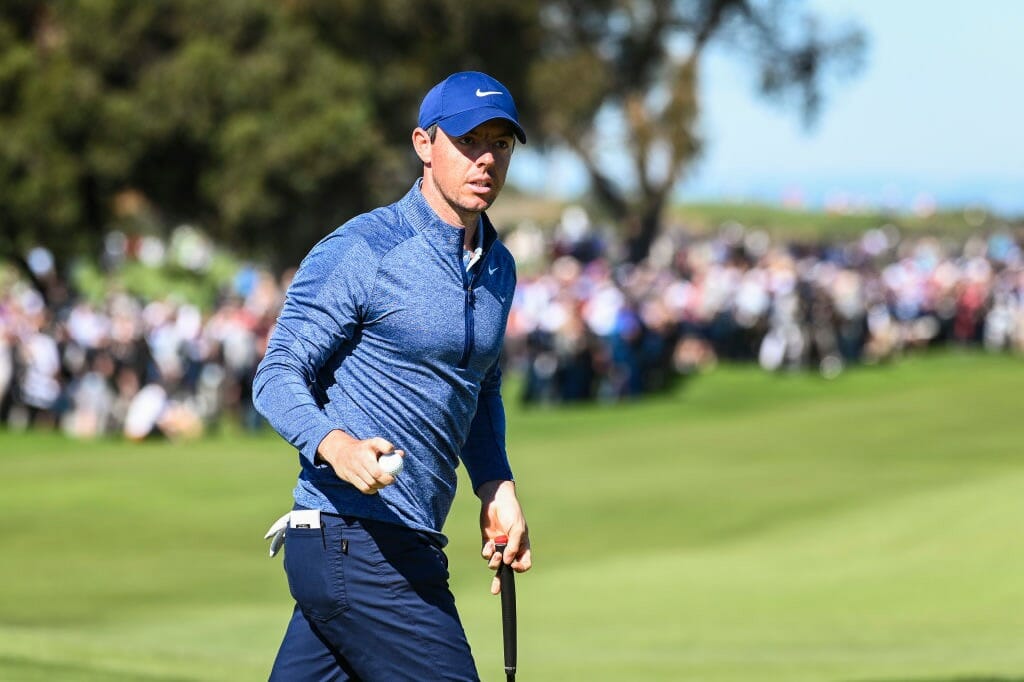 Rory McIlroy was soaring after a  brilliant ‘Top Gun’ showing of two eagles on route to a best-of-the-day 65 on day two of the Farmers Insurance Open at Torrey Pines.

McIlroy heads to the weekend at eight-under par, trailing seven shots behind victorious Ryder Cup team-mate Justin Rose who opened-up a three shot leading cushion with scores of 63 and 66.

McIlroy, teeing off on the ‘easier’ North Course, found the green with his second shot of his round at the par-5 10th hole and then brilliantly holed a 15-footer for an eagle ‘3’.

Then at the uphill par-4 16th, where there is the stunning backdrop of La Jolla Beach, McIlroy split the fairway with a booming drive and with a wedge in his hand, found the bottom of the cup with his second shot for an eagle ‘2’, showing his delight by throwing both arms skywards and as he did a pair of deafening F-18 fighter jets flew over the course having taken-off from the nearby US Naval Air Station at Mirrimar, and the where much of the 1986 Tom Cruise hit movie ‘Top Gun’ was filmed.

It was the first occasion McIlroy had posted two eagles in the same round since he eagled both the 16th and the 18th holes in a third round 68 en route to victory in the 2014 Open Championship at Royal Liverpool. The last occasion he managed at least one eagle in his round was an 18th hole ‘3’ on day three of last September’s BMW Championship in suburban Philadelphia.

“It was a great and especially after only shooting one-under yesterday on the South Course, I knew I needed to go out there today and shoot something in the mid-60s to just make the cut let alone get myself back into the golf tournament,” he said.

“So, it was nice to eagle the first hole I played, and do something that I don’t think I’ve done in a very long time, and it was a real bonus holing that 80-yard wedge shot on the 16th or my seventh hole.”

“To be five-under through nine holes and then standing on the first tee of the course and the 10th of my round I was then thinking of maybe shooting something like Jon Rahm shot yesterday (62) but all-in-all it was a good round of golf.”

McIlroy made the turn in five-under after a birdie at his eight hole and moved to six-under for his round at the uphill par-4 second he was playing as his 11th. He then birdied his 16th but dropped the only shot of his round at the par-4 eighth hole or his 17th.

There was then plenty of yardage book analysis after McIlroy leaked a drive right down his last hole before blasting out of the rough, and with the ball marginally below his feet, for his shot to land just short of the green at the par-5 ninth. McIlroy then chipped to some 10-feet and calmly rolled in the birdie putt.

“It was very important to start and finish my round off well,” he said “I had three perfect shots right out of the gate on our first hole, which was the 10th, and played a great nine holes and got myself right back in the tournament.”

“I played well yesterday, I played much better than that 71 suggested yesterday on the South course, so I knew I just needed to go out today, play similarly and just stay patient, hole a few putts and I was able to do that nicely.”

“So, that birdie on the last just capped off a nice day.”

McIlroy will commence his third round at 9.20am local time (5.20pm Irish) in the company of the South Korean duo of Si Woo Kim and Sangmoon Bae.