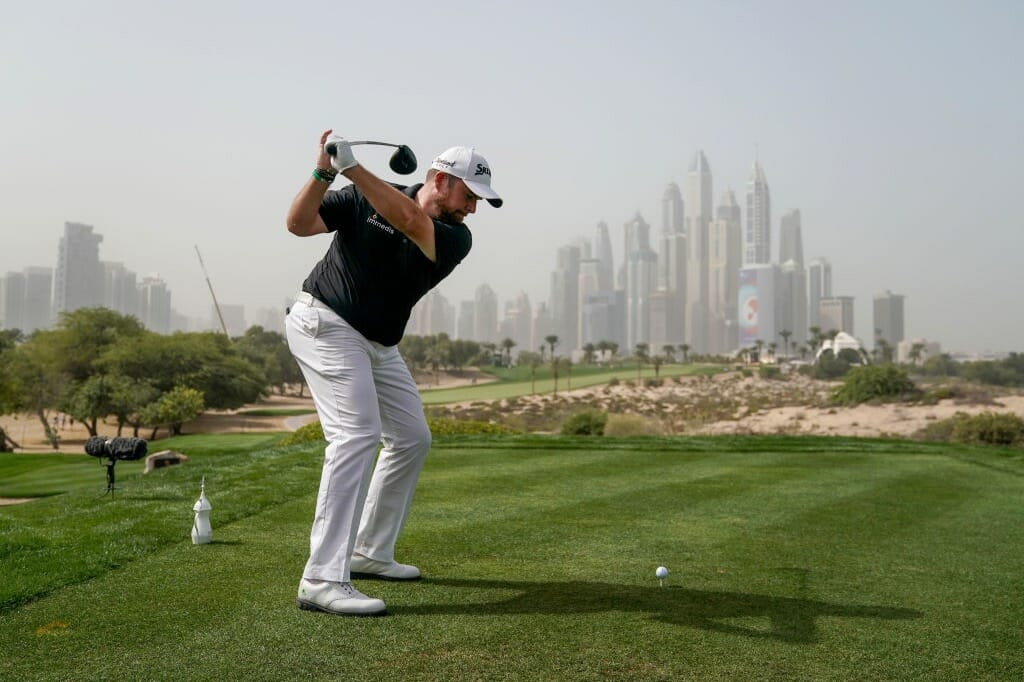 The new World Number 41 picked up two birdies to make the turn in a blemish-free 33 strokes before adding another gain at the short par-3 11th.

A first drop shot of the day fell at the 12th but he bounced back immediately with a birdie at the par-5 13th before adding two more at 16 and 18 to finish his round off in style.

The Clara man’s five-under-par 67 saw him jump 17 places up the leaderboard into a tie for 14th, just four shots off the lead at the halfway point.

The same can’t be said for good friend, Paul Dunne however, with the Greystones professional falling to his second straight missed cut after a disappointing 75 today left him four shots shy of the cut-mark at plus-one.

World Number Five Bryson DeChambeau proved his credentials as one of the pre-tournament favourites after the American topped the leaderboard alongside Lucas Herbert on day two.

DeChambeau is still searching for a maiden European Tour title and first overseas victory as a professional but has previous at the Emirates Golf Club after winning the Amateur Medal in a tie for 18th at the 2016 edition, and improved his chances of correcting that statistic by recording successive six-under-par rounds of 66.

He will not be alone, however, as Australian Herbert equalled his career-best round of 63 recorded at both the Portugal Masters and the Rocco Forte Sicilian Open last season as he rolled in an eagle and seven birdies to join the high-profile American on 12-under-par.

Alviro Quiros held the clubhouse lead at 11-under but was joined by four-time Major Championship winner Ernie Els for tied third, while defending champion Haotong Li, qualifier Callum Shinwin, Frenchman Matthieu Pavon and Matt Wallace and Australian Jason Scrivener were all at ten-under-par.

DeChambeau hit a terrific approach from a bunker at the third to rescue a birdie, only for the American to hand that shot back at the next but he worked his way back into contention with three successive gains from the sixth – which included a stunning second shot at the eighth from the dirt track following a shanked tee.

He finished the front nine with a second bogey but responded in style by sinking a 20-foot eagle putt at the tenth. A third dropped shot followed at the 12th, but he picked it up immediately before finishing his round with birdie-birdie to join Herbert at the top of a congested leaderboard.

“I’m pleased,” said DeChambeau. “I’m pleased that I’m playing golf. I’m getting it in the hole and executing the right shots when I need to and making a lot of key putts.

“I thought after yesterday getting it around not making a bogey was awesome, but today, even more impressive with three bogeys on the card to still shoot six under. I just felt uncomfortable, unfortunately, and consequently just I am not ball-striking my best. But hey, I’m not complaining one bit.”

Herbert got off to a flying start on the back nine with eagle-birdie-birdie before adding a further gain at the 16th to reach the turn in 32. The 23 year old then rolled in back-to-back gains from the first and picked up further shots at the fifth and eighth to take sole lead from Quiros.

However, he produced his best moments at the ninth – his last – when his wayward tee shot went so far right it missed the water and onto the dirt track, only to land his approach on the green for a difficult par putt. But he holed the 40-foot left-to-righter to nudge ahead with the best round of the day.

“Everyone is making those numbers around the back nine,” Herbert said. “You’ve obviously got the three par-5s, and 17 is drivable, so there’s some good birdie opportunities.

“I knew I just had to take advantage of them straight out of the gate. I did that with an eagle-birdie-birdie start, and kind of just kept flowing. I was like seven under through about 11 holes, and it just felt like I was cruising. I probably left some out there to be honest.”

Spaniard Quiros has not been in the winner’s circle since victory at the Rocco Forte Open – Vendura, Sicily in May 2017 but put himself in a strong position to end that drought with an eight-under-par second round, which contained an opening bogey followed by eight birdies to set the initial target of 11 under.

Els rolled back the years to hit a superb 65 and move in contention as he carded an eagle, seven birdies and two dropped shots to earn a late start on Saturday.

Kalle Samooja almost capped off a brilliant birthday as the Finn moved to 11 under following five birdies in his first 16 holes, but his hard work was undone by a bogey and double-bogey on the final two holes as joined a group of 13 players at eight under – including Thorbjørn Olesen, 2017 Masters Champion Sergio Garcia and brief second-round leader Thomas Detry.