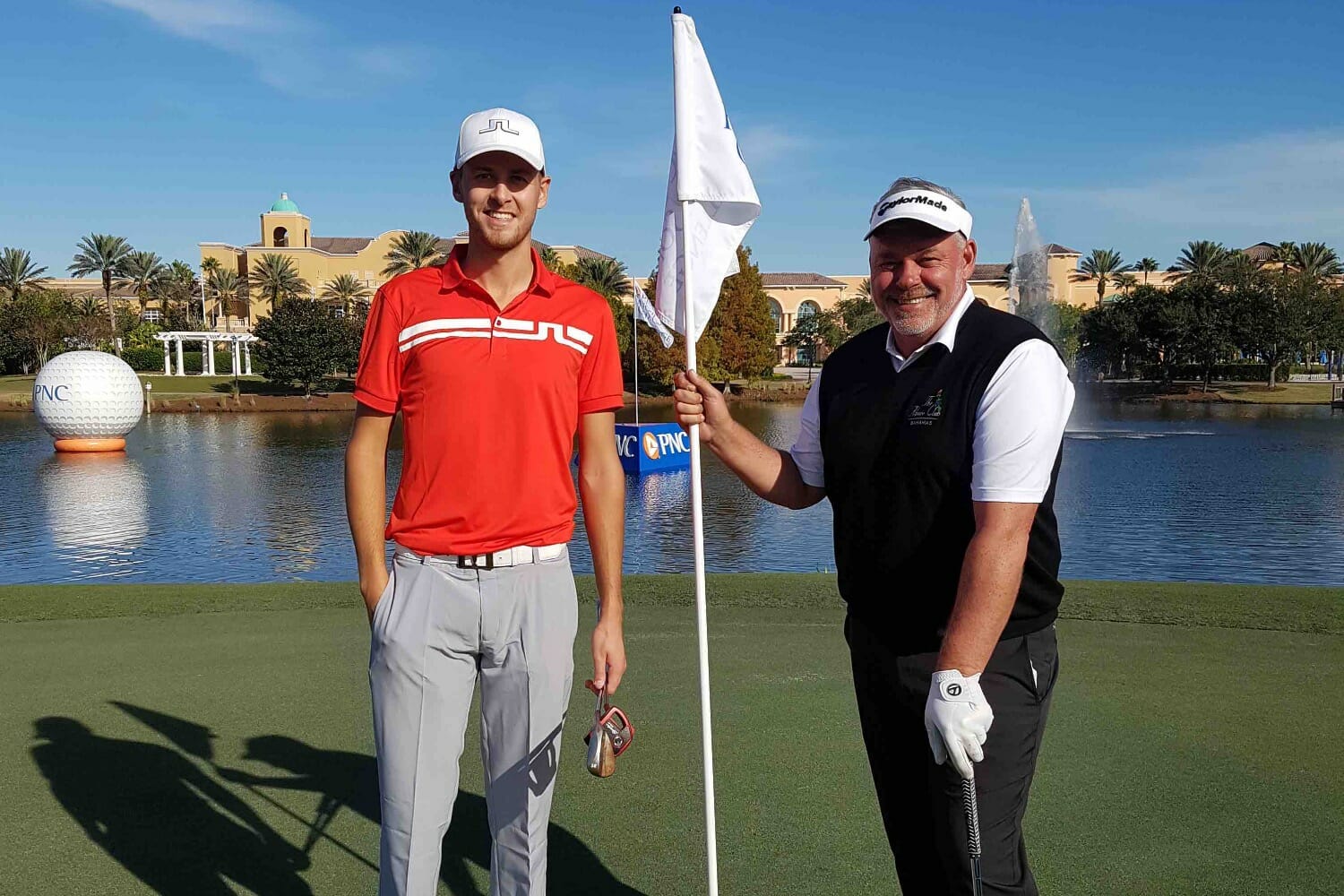 Darren Clarke is teaming with oldest son, Tyrone looking celebrate victory in the 21st staging of the PNC Father-and-Son Challenge in Orlando.

The Clarke’s are competing in the 16-team two-day event over this weekend for the first time, a year after Padraig Harrington teed-up alongside then 14-year old son, Paddy.

The 20-year old, 6-foot 4-inch Tyrone towers over his 2011 Open Championship winning father Darren, and judging by his oldest son’s efforts in the practice rounds the duo could be knocking on victory’s door over the two rounds of the Ritz Carlton Grand Lakes course.

“Tyrone has been working hard the past few weeks on his Investment Management exams down at Boca Raton while I’ve been at home for a couple of weeks but not playing an awful lot of golf given the weather,” said Clarke.

“I joined Tyrone down in Boca last Saturday, so I spent a lot of time on my down there.

“When I look back, I had Tyrone first on a golf course when he was about two or three years of age and I’d go so far as to say he’s inherited my golf genes (laughing).”

“This is a fantastic event for he and I to contest but in saying that there are some fantastic teams this week, so the competition is pretty stiff.”

Tyrone, who plays off a +2 handicap at Royal Portrush, was quizzed if he felt there was any pressure on his young shoulders this week teaming with his 21 worldwide victories father, and also if they were to win would he be taking any of the credit.

“No, no pressure at all,” he said smiling. “If we were to win, I am happy to share the accolades.  It’s going to be fun playing with dad and also my brother and step-mother arrive tonight (Thursday), so that’s going to be nice.”

“Actually, Conor is going to caddy for me which will be great fun.”

Clarke will tee-up tomorrow (Saturday) having played hardly any golf this past season. He contested eight events on the European Tour with the last being in missing the cut in the Open Championship, three weeks shy of turning 50.

Clarke then made his way to Seattle for his Champions Tour debut in the Boeing Classic and competed in six events to earn some $56,000 with a best finish T24th in Seattle.

And Clarke revealed he will contest a full Champions Tour year starting in a month’s time in Hawaii.

“I only played the handful of events since I turned 50 but from the start of the New Year I will be really, really busy full-time on the Champions Tour,” he said.

“I will probably play all of them so I don’t know when I will be back home in Portrush next. I am going to play the Irish Open at Lahinch that Paul (McGinley) is hosting but then in the week between the Irish and The Open I am back in the States for the Seniors Players Championship at Firestone in Akron.”

And with his palatial abode overlooking Royal Portrush, Clarke is clearly looking forward to the first staging of golf’s oldest Major at the course since it’s only hosting in 1951.

“I’m really looking forward to The Open at Royal Portrush as it’s going to be an exciting week,” he said. “I’ve been speaking to the R & A about the changes they’ve made to the course all the way through.”

Other competing this week in the ‘Major-winners only event in Orlando include 18-time Major winning Jack Nicklaus and grandson, Gary along with Bernhard Langer and the oldest of his four children, daughter Jackie.

The strongest pairing is the duo of Davis Love III and professional son, Dru who has contested four PGA Tour events in his career.