McDowell runner up for a second year at the QBE Shootout

Graeme McDowell agonised in ending a difficult season with a second-place finish for a second year running in the QBE Shootout in Naples, Florida.

McDowell and his Argentine team-mate Emiliano Grillo had combined superbly to birdie seven holes in succession from the 11th to 17th holes in the alternate shot format only for McDowell to miss a birdie putt to force a hopeful play-off at the last in a combined final round of 62 for a 29-under par on the Tiburon course.

The American duo of Patton Kizzire and lefty Brian Harman finished with an eagle and a par also in a 62 to win by a shot with a 30-under tally in the overcast and wet conditions.

GMac and Grillo had enjoyed a three-way share of the lead with a round to play in the $US 3.4m event but soon fell three shots behind heading to the turn in the wet and overcast conditions. Over the opening nine the duo could manage just three birdies and it should have been four after McDowell missed a tap-in on the par-3 fifth hole and as McDowell had thought to himself at the time, the missed putt came back to haunt him in walking off 18.

But the pair ignited their drive back to the front with the first of their seven straight birdies at the 11th. They came to the last needing an eighth birdie in a row and after Grillo missed his birdie putt, McDowell stepped-up staring at a six-footer for birdie that he sent some two-feet past the flag.

“I missed a birdie from about two feet on the 5th today, which I thought was going to prove quite costly at the end and it was,” said McDowell.

“I hit a 4-iron in there to about two, two-and-a-half feet, and it was a mere tap-in for birdie and I missed it. Emi’ and I played fantastic on the back nine, we really ham-and-egged it really well and to birdie 11 through 17 was great.”

“So, disappointed with that putt on the last there, it was a misread.”

“I’m also disappointed that that’s the way I’m going to finish my year but there’s a huge number of positives in my game, and the way Emiliano played this week.”

“This is one of my favourite tournaments but another second place for me, I think that’s about three of them. So, looking forward to getting back here next year and trying to go one better.”

McDowell had teamed with Shane Lowry a year ago to also finish runner-up and now be among four ‘all-international’ teams in the 30-year history event to end as the bridesmaid.

Tournament host Greg Norman and fellow Aussie Steve Elkington are the only ‘international’ pair to win the event in 1998. 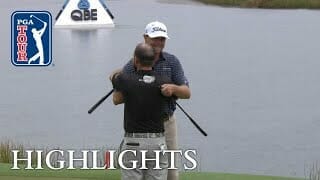