Darcy bows out on a high at Costa Blanca Senior Masters 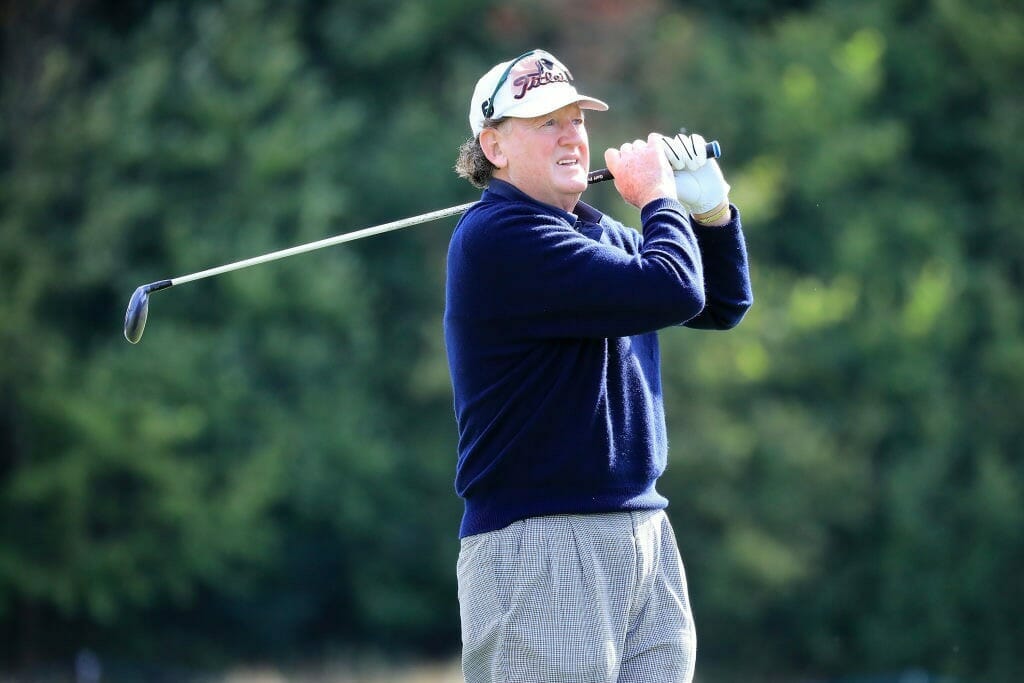 One of Ireland’s great professionals, Eamonn Darcy bowed out of professional golf in fine style at the Costa Blanca Senior Masters at  Meliã Villait with a final ever professional round of five under par.

Another of that magnificent contingent from Delgany, Darcy, who turned professional in 1968 and among many career highlights holed the winning putt for Europe in the 1987 Ryder Cup as they won for the first time on American soil, closed with a round of 67, just one shot shy of shooting his age, 66 as he drew his stellar career to a close.

Darcy, who was a member of the European Ryder Cup team in 1975/77/81/87 won four European Tour titles as well as a host of other titles, including winning the Irish PGA Championships twice (1988 & 1992) during his career and finished in the Top-20 of the Order of Merit nine times

In his final round as a pro unfortunately he didn’t find himself challenging for the title but his five under par round was one of the best of the day and it moved him up to T31 on the leaderboard, with Paul McGinley finishing as the leading Irish player on six under par after a 66 left him in T13 spot.

Des Smyth was two shots adrift of McGinley on four under following a closing round of 69 while Brendan McGovern was T40 with Philip Walton T51.

The tournament was won by Paul Streeter who became a two-time Staysure Tour winner after beating Miguel Ángel Jiménez in a play-off after both players found the fairway on the par four 18th and the Englishman hit a stunning second shot over the troublesome greenside bunker, landing it three foot from the pin. The Spaniard, who was roared on by the home crowd all week, could only find the heart of the green and left himself a tricky downhill putt from 15 foot.

With The Senior Open Presented by Rolex champion two-putting for par, Streeter grasped the chance to become the maiden Costa Blanca Benidorm Senior Masters champion as he rolled his birdie putt into the middle of the hole.

Having gained his 2018 Staysure Tour card via the Final Stage of Qualifying School, Streeter did not worry about nerves on his way to clinching his second title of the season.

“To hit that second shot on 18 that close and below the hole, I couldn’t have put it in a better place, so it was great to finish like that.

“I’d say that shot is up there with the best I’ve hit in my career. To do it against such a great champion like Miguel makes it feel even better.

“My goal was to win this year, so to win twice wasn’t part of the plan. To finish inside the top 20 on the Order of Merit and to win once was my goal, so to win again feels fantastic.”

Jiménez, who was making his maiden regular Staysure Tour appearance, took the runner-up spot, while fellow overnight leader Rafael Gomez recorded a round of 70, two under par, to take a share of third place alongside David Shacklady after his bogey-free round of 67.