Seamus Power launched a back nine birdie blitz in posting a four under par 68 on day two of the Sanderson Farms Championship in Jackson, Mississippi.

Power jumped 33 places into a share of 15th place at five-under par in his second event of the new 2018/19 PGA Tour wraparound schedule.

The West Waterford golfer had missed the cut in the Safeway Open and Power’s first event after securing the very last automatic place into the new PGA Tour season.

But Power put that hiccup behind him emerging from also from a first round 71 in the capital of Mississippi to produce seven birdies on day two of the $US 4.4m event

Power had birdied his second and third holes but headed to the turn following bogeys at the fourth and seventh holes before tearing-up in the inward nine with five birdies, including three in succession from the 13th hole of the Country Club of Jackson course.

At the par-3 13th Power chipped-in from some 15-yards right of the flag while at the par-5 14th he found the green in two and two-putted from 20-feet while at the par-4 15th Power holed a four-footer for birdie.
Power grabbed the seventh birdie of his day, and the best of the bunch, in holing a 26-footer at the par-4 17th.
Powers 67 was his lowest round since a stirring final day 67 at the Northern Trust and his last PGA Tour event of a memorable 2017/18 year. 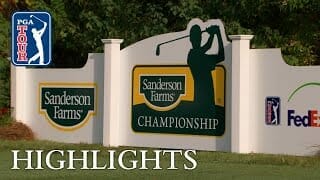