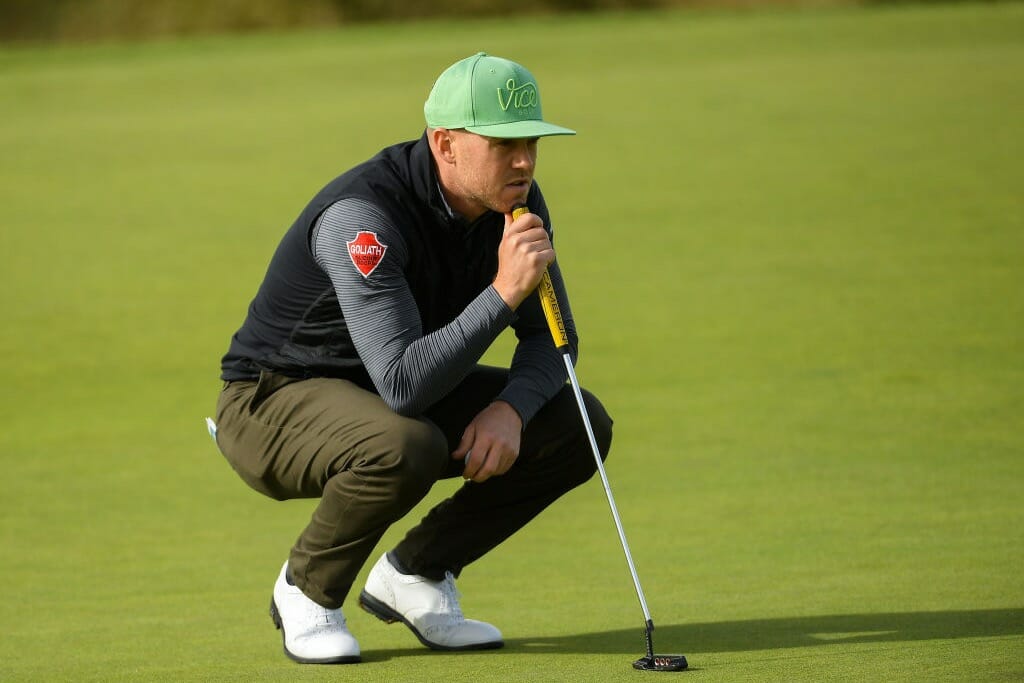 West Cliff’s Brendan McCarroll fired a flawless six-under-par 66 to bolt into contention ahead of the final round of the Andalusian PGA EuroPro Tour Championship in Spain.

McCarroll, who finds himself currently in 12th spot on the Order of Merit standings where the top-5 earning their Challenge Tour starts next season, carded four birdies and holed out for eagle at the par-4 sixth and now finds himself in a share of 4th spot on nine-under, just four shots off the lead.

Tullamore’s Stuart Grehan is two shots further back after a quiet two-under-par 70 in round two. Grehan carded four birdies and two bogeys and is back in a share of 11th spot with a round to go in Spain.

The Royal Dublin’s Niall Kearney is up to 14th after a much improved five-under-par 67. Team Ireland’s Brian Casey picked up one shot in his 71 to move to two-under-par while Limerick’s Tim Rice enjoyed a much better day; his three-under 69 moving him back to level par for the tournament.

Whitehead’s John Ross Galbraith is one shot better off at minus-one but his second round 75 sees him drop into a share of 31st spot overall.

At the top, Nick McCarthy carded the lowest round of the day and tournament so far (-8) to lead by one with just 18 holes between him and a Challenge Tour card in Spain.

McCarthy (Moortown Golf Club) started the day two off the lead after a solid opening round of 67 (-5), dropping just one shot in his first 18 holes at Desert Springs Golf Club, Spain.

A similarly solid round with two more birdies in the second round puts the Moortown man in the driving seat as he looks to try and clinch one of only two Challenge Tour cards not already tied up this season.

“My iron play has been great this week, they’ve left me some easy putts today, and luckily I’ve been able to get the putter going.”: said McCarthy.

It’s all or nothing for McCarthy today. Sitting 24th in the Order of Merit; win, and he will find himself moving onto the Challenge Tour next season, anything else and he will miss out.

His track record at Desert Springs heading into this week isn’t the strongest, three rounds in the mid 70s in 2016 saw him finish tied for 43rd.

He said: “Before I got here I would have said this isn’t a track that suits my eye, but I’ve managed to strike the ball well and put myself in great positions all week, so at -13 I’d probably now say it does suit me.”

Sitting a shot back on -12 is the experienced Steve Surry who, despite not having a win to his name in his EuroPro Tour career since 2009, has bundles of experience across the European and Challenge Tours, as well as plenty of success on the Sunshine Tour this season. And with a Challenge Tour card as his reward if he were to win, there’s never a better time to get his first win on Tour.

The ever-consistent Dave Coupland completes the final leading group of the 2018 season, a position to which Coupland will feel more than accustomed to now.

Two wins already to his name this season, amongst four top five finishes and eight top 10’s in 15 starts this year; with the Challenge Tour card already wrapped up for the Woodhall Spa man, the prospect of knocking Mark Young off the top spot with a win today is the best and last chance he has, and one he will be focused on achieving.

Young (Longridge Golf Club) faces a more than mountainous task to try and steal the headlines. The £250,000 four-win bonus cheque will likely not see the light of day barring multiple miracles with the Order of Merit leader 12 shots off the pace after a disappointing two-over second round.