McIlroy determined not to be distracted by Tigermania 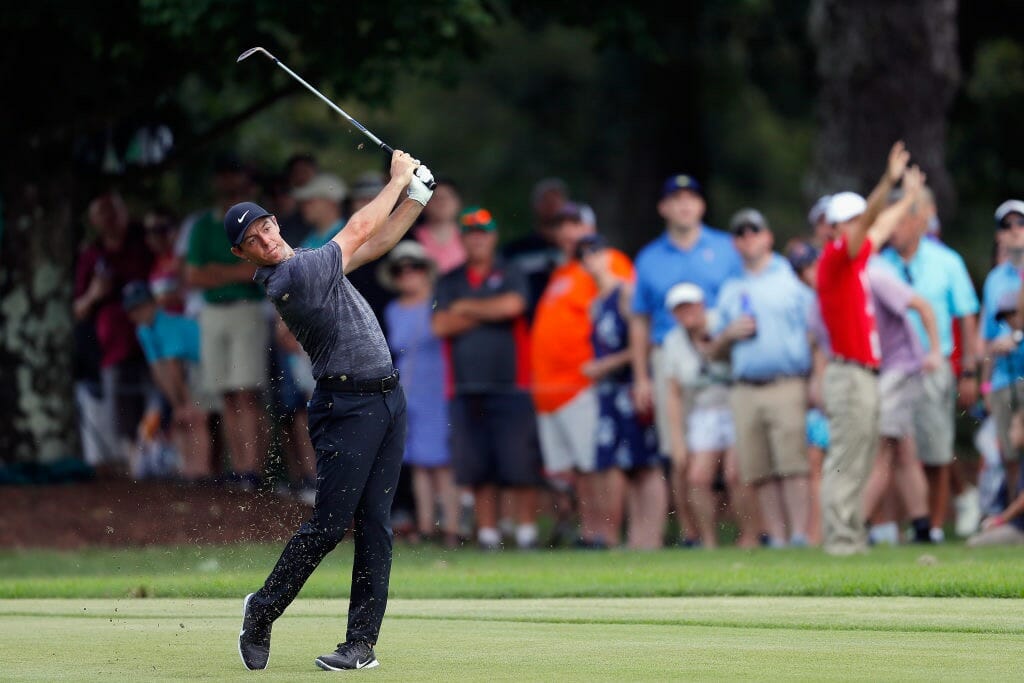 It is a promoter’s final round dream two-ball with Tiger Woods and Rory McIlroy out in the final round of the biggest, richest golf tournament on the PGA calendar.

But if McIlroy is to deny Woods a first victory in over half-a-decade he knows he cannot afford to be distracted by the enormous attention to centre on Woods.

East Lake has not witnessed scenes like those these past three days since Woods last teed-up on the famed Atlanta course, with ‘Tigermania’ set to again engulf the final round.

Woods needed just 23 putts in posting a five-under par 65 to edge his way to a three-shot lead at 12-under par heading to the final round of the 2017/18 PGA Tour season-ending Tour Championship at East Lake while McIlroy, who signed for a 66, shares second place with World No. 1 Justin Rose (68) on nine-under par.

While it has actually been 1,876 days since Woods was handed an eighth WGC – Bridgestone Invitational trophy, McIlroy has battled his own 2018 demons in seeking a second win after earlier this year capturing the Arnold Palmer Invitational and nothing would delight the Ulsterman more than to be heading to Versailles with a victory packed into his European Ryder Cup golf bag.

But if McIlroy is to continue to benefit along the ‘journey’ that he spoke about on the eve of the Atlanta event he needs to remain solely focussed on his own game.

“All I can do is worry about myself,” McIlroy said. “It doesn’t matter who it is I’m playing with. It’s obviously exciting for the golf tournament. It’s exciting for golf in general that he’s up there. But for me, all I can do is concentrate on myself. The game is hard enough without looking at other people. Go out there, take care of my business, and hopefully that’s good enough.”

“I’ve been guilty of looking around before, and it hasn’t paid off,” McIlroy added. “You know, I’ll obviously still watch leaderboards, I’ll still look at where I’m at in relation to the field and to the lead, but I have to just, first and foremost, focus on what I can do, fairways, greens, hit good putts, and just try and repeat that.”

Woods will tee-off on day four having now led through 54 holes on 58 PGA Tour occasions and remarkably the now 42-year old has gone on to claim victory on 54 occasions.

And Woods has waited long enough to now be in a positon for what would be an 80th PGA Tour title and a 107th global triumph.

“This is a spot I’d much rather be in than certainly four or five back.”

But then McIlroy is no stranger in coming from behind to claim victory in his career.

“I think it’s the same regardless of who it is in the lead,” said McIlroy. “You’re going out to try and shoot a good score. And whether that score holds up at the end of the day or not, again, it’s just about focusing on yourself. Look, he’s a notoriously great front-runner, but if I go out and I play similar tomorrow to today, I’ll have no complaints.”

“So, we’ll see what happens, but it’ll be exciting to be up there and have a chance to win the golf tournament.

One thing is certain though McIlroy will not be wearing black as he did on day three, looking very uncomfortable in the continuing heatwave conditions.

“I think I’ll wear red. No, geez, I’ve regretted wearing black out here today. It was hot,” he said.