Darcy best of Irish seniors on opening day in Scotland 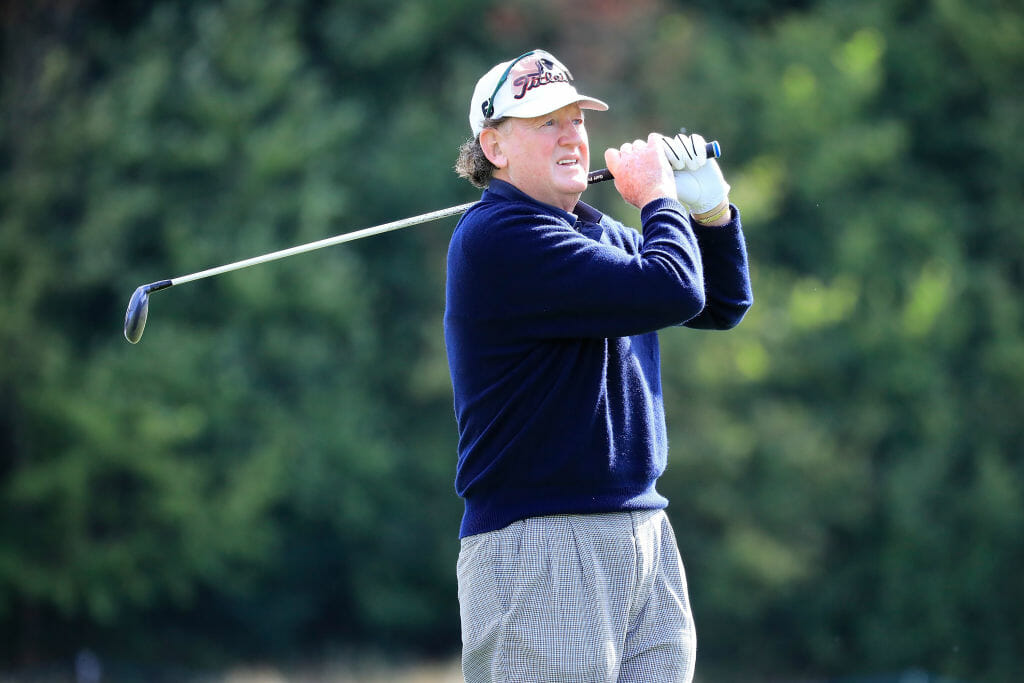 At the experienced age of 66, Eamon Darcy was the only Irishman to break par on the opening day at Craigielaw Golf Club, host venue of the 2018 Scottish Senior Open.

Darcy rolled back the years as he carded an opening 71 that included three birdies and just two drop shots to sit in a tie for seventh as day one drew to a close in Scotland.
Des Smyth and Brendan McGovern both carded opening 73s to sit in a tie for 30th with Philip Walton a further three shots back after a 76 left him in a tie for 45th.

At the top and four shots ahead of Darcy, Stephen Dodd continued his incredible run of form to take the first round lead, one stroke ahead of 1991 Masters Tournament winner Ian Woosnam.

The Welshman carded a five under par round of 66 and is one shot clear of compatriot Woosnam and England’s David Shacklady, who each signed for rounds of 67.

Dodd, a three-time winner on the Staysure Tour, has finished no lower than sixth place in his last six regular events on the European over-50s circuit, and also finished inside the top 20 at The Senior Open Presented by Rolex at St Andrews in July.

“It was tough out there today,” said Dodd. “The wind died out as the day went on, but it was still difficult. Links courses are always a challenge; the defence of this course is the wind and it’s always going to be tricky when it’s up.

“I’ve had a really good run recently. It’s probably down to a lot of good coaching with Denis Pugh. I’ve worked with him for a long time and we’ve found something which seems to have been working over the last few months.

“I’ve enjoyed the feeling of knowing that I can be competitive again. My game has been good overall. I’ve driven the ball well and I’m putting well too; playing the run of events that we’ve had has been good. I feel a little tired but it’s nice to know that I can go out and perform.”

Woosnam, Ryder Cup Captain in 2006, arrived in Scotland on the back of a tied tenth place finish at last week’s European Tour Properties Senior Classic in Bulgaria.

The 1991 Masters Tournament winner made the turn two under par and made four further birdies on the back nine including one on the ninth hole, his 18th, which stopped a run of consecutive bogeys on the seventh and eighth holes.

“It wasn’t bad for a first go around here,” admitted the 60 year old. “I didn’t have a practice round because I didn’t feel great yesterday – maybe that’s the way forward.

“It was a pretty cold day and I was quite stiff but I hung in there. This was a day when I just tried to do simple things; that’s how I used to play, keep it simple. I had a nice 20-footer on the last to finish it off after a couple of dropped shots. I gave myself something to hang on to.”

Shacklady battled testing conditions in the afternoon as heavy rains fell on Scotland’s Golf Coast. The 51 year old, who won his first Staysure Tour title at the VTB Russian Open Golf Championship in August, carded five birdies on the front nine and came back one over par to sign for a 67.

“It got pretty nasty at the end,” he said. “I started off lovely. I hit shot after shot. I played lovely going out but had a couple of wobbles coming in. We were fortunate coming in that we were with the wind and not against it. It’s a stern test of golf out there.

“I’m feeling a lot more comfortable out there when I see my name up on the leaderboard, and I want to carry that on.”