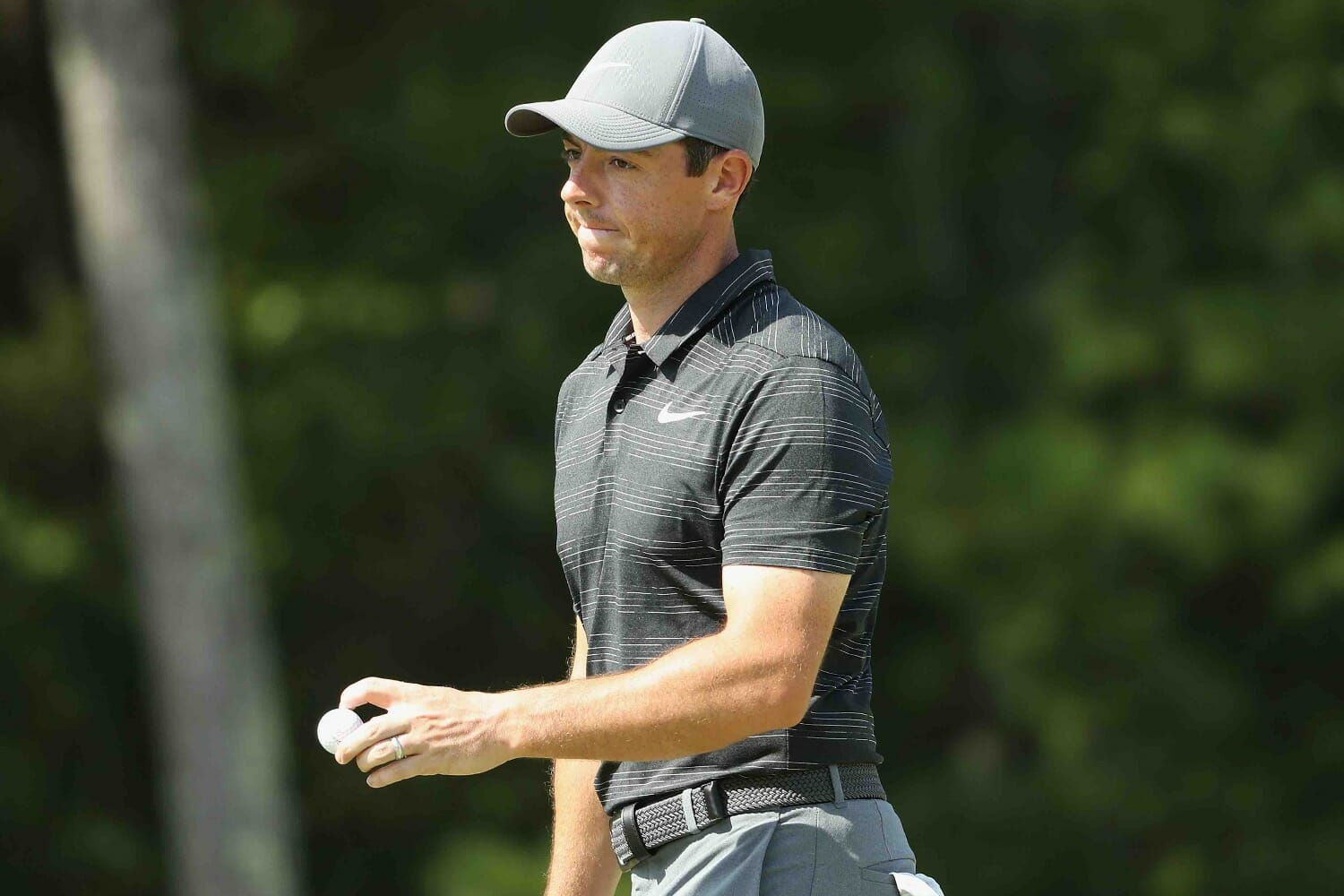 Rory McIlroy’s putting was about as miserable as the weather as he played yet another Tour supporting role, this time in the rain-affected BMW Championship in Philadelphia.

McIlroy saw hopes of a second Tour victory sink with a final round 68 for an 18-under par tally and a fifth place finish on the very water-logged Aronimink course while fellow PGA Champion, Keegan Bradley ended a six-year winless drought in sealing victory at the first extra play-off hole.

Bradley, 32 denied England’s Justin Rose in the playoff but Rose still moved up the rankings to become the new World No. 1, after both players completed regulation play tied at 20-under par.

Bradley had led by a shot playing the last but sent his second into a grandstand from where he took bogey only for Rose to birdie 17 and go one clear of his American rival. But then Rose then did the unimaginable in also bogeying the 72nd hole to send the event into a play-off.

From the outset, nothing went well for McIlroy, despite choosing an Emerald green rain-proof top for the third Monday finish this year on the Tour. He started the round sharing second place on 16-under par, just one shot adrift of the leaders, but proceeded to miss the opening two fairways and before long was on a run of pars while all around where making birdies.

Indeed, McIlroy made the turn after nine agonising pars and had a number or birdie chances but those he missed for birdie failed to even hit the hole.

He got a good break at the uphill par-5 ninth hole with his fairway wood bounding off a back green grandstand with his ball landing back on the fringe of the green from where he two-putted for a 9-hole effort of 16 putts.

He finally, made his presence known in landing his second shot at the downhill 10th to just a foot for a first birdie since late on Saturday afternoon but got no momentum from the birdie and proceeded to par his next five holes before just the second birdie of his round at the par-5 16th.

He then pared the remaining two holes for what is a seventh Tour top-10 this year with his lone success, the Arnold Palmer Invitational.

And McIlroy was not intent on hanging around, avoiding nearby youngsters calling for autographs as he blanked everyone in making a bee-line to the locker room.

His driving should not be a concern as he hit 41 of 56 Aronimink fairways over the four rounds but on the two days he struggled with the putter, needing 32 putts first in taking a second 69 and then the same number of putts over his final day 68 while in Thursday’s share of the lead 62, McIlroy used the putter on just 27 occasions.

The only good news is McIlroy moves from 24th to 17th on the FedEx Cup points table ahead of the 20th September starting Tour Championship in Atlanta and he has also moved-up two places to return to World No. 6

Tiger Woods produced a closing 65 to share sixth place on 17-under par and with Woods’ next event, the September 20th starting Tour Championship in Atlanta.

And by virtue of qualifying for the Tour Championship, Woods is now assured of teeing-up in next year’s US Open which is good news given his 10-year exemption for capturing the 2008 US Open, his last Major success, expired in June.

“I played a few tournaments now where I was close at the end and at the end of the season here to say that I made it back to the Tour Championship after what I’ve been through is a pretty good accomplishment,” said Woods.

“Again, to have a chance to win again, this year, it’s a very positive feeling and had I made a few more putts this week it could have been a different deal coming down the stretch.”

Meanwhile Jordan Spieth is staring at a likely $20,000 fine in failing to contest the minimum of 25 Tour events in a season.

Spieth had not been expecting to miss out on the Tour Championship but he has in posting a last round 73 for a distant share BMW share of 55th place.

The result saw the three-time Major winner drop to 31st and one place outside the leading 30 on the FedEx Cup points table who will tee-up in Atlanta.

The Tour Championship was to be Spieth’s 24th and the Ryder Cup his 25th events to complete his schedule for the season.

“I assume it will either be a fine or I’m adding some events in the Fall,” said Spieth.

“I don’t know if that counts. I’m not sure. I talked to the Tour a little while back and I didn’t really think much of it.”

“If it becomes a situation then, I obviously accept whatever fine it is and move on and try and add one every year but it’s kind of tough.”