Seamus Power admitted his knees were knocking in holing a testy three-foot putt on the final hole for par to be assured of contesting all four rounds of the Northern Trust at Paramus, New Jersey.

Power was the last to tee-up on day two of the opening event of the FedEx Cup Play-Off Series and the very last to putt out in a round of a second straight level par 71, walk ing from the course at 6.28pm local time.

As the proud West Waterford golfer emerged from the scorers hut clearly delighted with his efforts, he was advised by the scorer he would be first out on Saturday in tackling the Ridgewood Country Club club.

And to coincide with his third round tee-time confirmation, Tiger Woods emerged from the practice putting green to walk just feet away from Power on his way into the clubhouse, with Power quizzing the scorer:  “Am I playing with TW?  It will be pretty cool to play with Tiger but then I might shoot an 85 (laughing) but then it would still be great to be out with him.”

Unfortunately, the response was ‘No’ after Woods had finished a short time earlier with similar scores to Power but taking a horror 35 putts over his second round.

Power’s second round was a mix of three birdies and just as many bogeys but there was no more special birdie than his effort on the par-5 17th when, needing to birdie at least one of his closing two holes, he split the fairwy with a 317-yard effort before landing his second, a 3-wood of 258-yards, some 40-feet shy of the hole ahead of super chip shot to just over three-feet.

He headed to the last now needing a par, at worst, to secure his place over the weekend and sent his second shot right of the flag with moments later his playing partner Jhonattan Vegas holing a 40-footer from off the front of the green for birdie.

There was probably around 50 fans remaining to see Power line-up his third shot and using the putter from also 40-feet and off the green right of the flagship g=he lagged his ball to just three from the pin.   Power studied the putt at length before calmly finding the bottom of the cup.

“My knees were knocking a little bit over that last putt I have to say and any putt is never easy out there and you have to earn them but the great thing is I am here for the weekend and that’s nice even though it’s now first out,” he said.

“It has already been quite an amazing week to have been last into the field, last to tee-off today and last to putt out and now first out in the third round, so I’m going to be stomping around the greens tomorrow morning (laughing).”

“The thing is looking at the leaderboard only 10 shots now cover the whole field and I know now if I can get off to a good start in the morning, I could be easily in with a shout.  You never know, you never know.”

If there any is concern for Power it is a worrying hip but then the West Waterford brushed any concern aside.

“The hip is fine and while it’s a bit stiff all it is, is a bit of fatigue,” he said. “I am not big on taking anything to ease any pain and I am more the type to just grin and bear it.  I will be okay.” 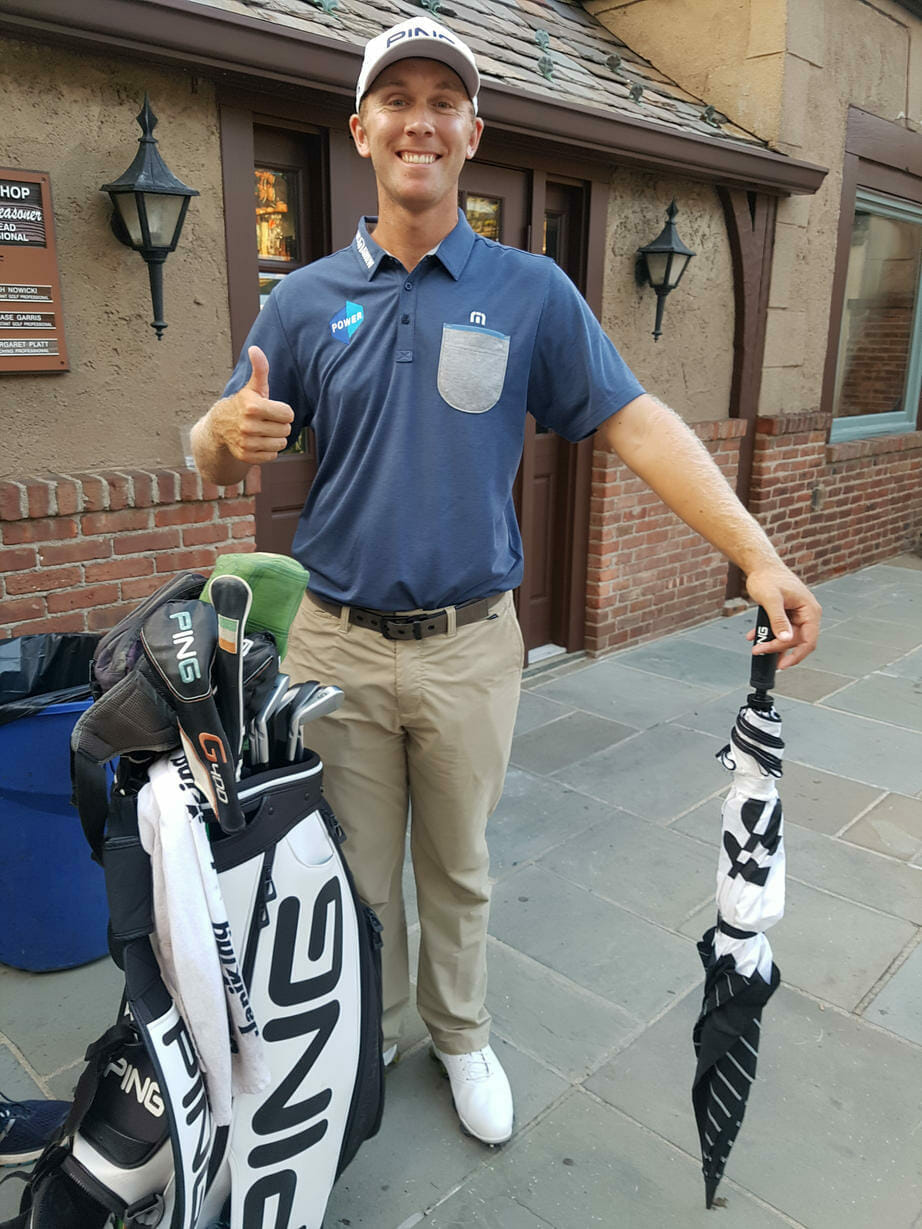 While Power is delighted to have ‘free-wheeled’ it into the weekend, which he said was his goal at the start of the week, there is now more at stake.  He is projected after two rounds to just move-up one place to 124th on the FedEx Cup standings but will need to be inside the top-100 if he’s to qualify for next Friday’s starting Dell Technologies Championship at TPC Boston.

“I am going to need a couple of low ones for sure over the weekend,” he said.

“The thing, as I said, if I can get to four, five or six-under and then if I could push it to eight, nine, 10 or 11-under come Sunday evening you may not win it but you certainly should be pretty high-up the board.  So, there is a lot to play for and we will see.”

But his more immediate plans were to meet-up with his uncle and cousin, who are visting from Ireland and have walked all 36-holes with him.