Harrington hunting for a sweet 16th title in Prague 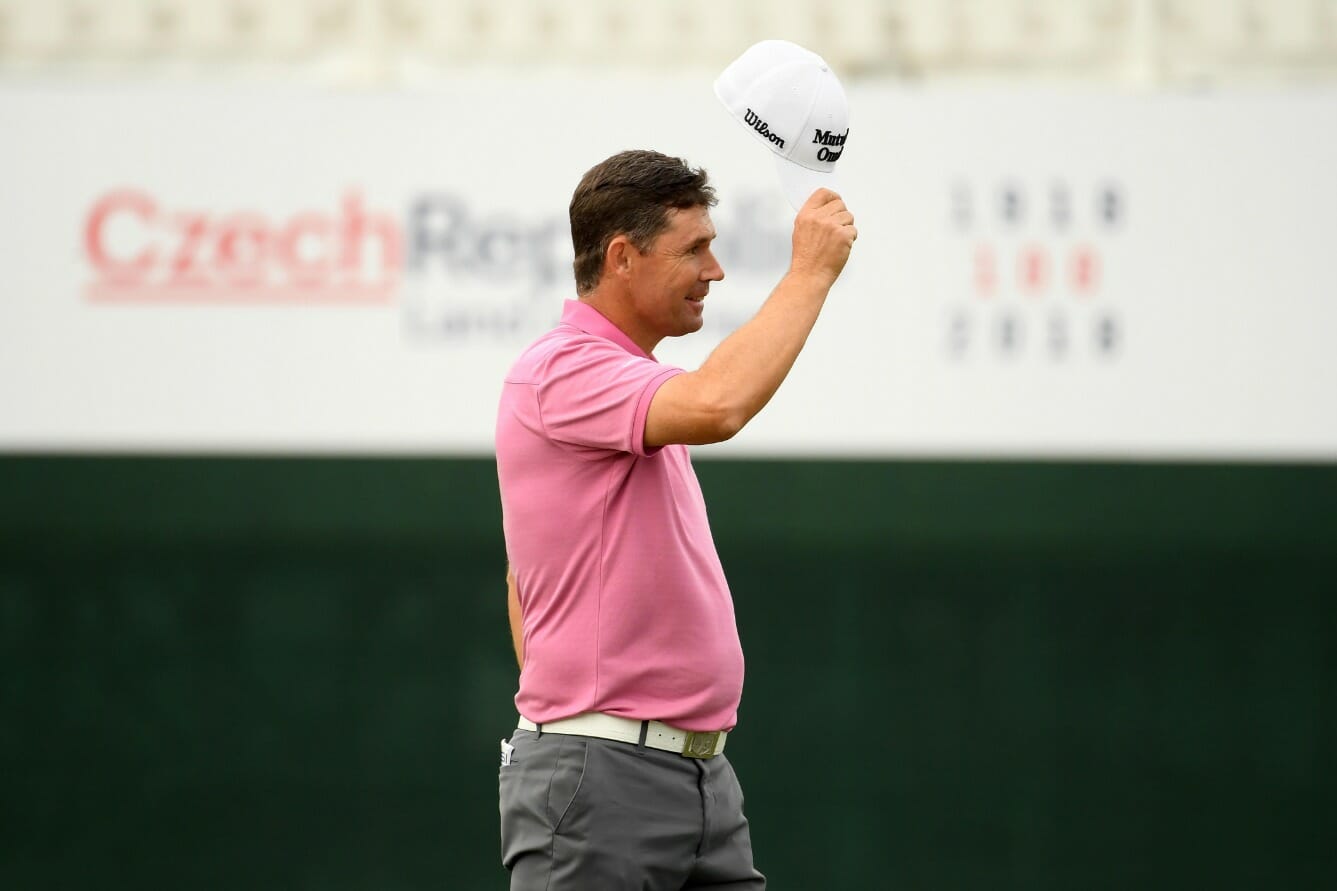 Three-time Major winner and Ryder Cup Vice Captain Padraig Harrington will vie for a 16th European Tour title at the D+D Real Czech Masters after a classy third round performance handed him a share of the lead heading into the final round, alongside Italian Andrea Pavan.

Harrington made a late call to compete at Albatross Golf Resort after missing out on the Fed-Ex Cup playoffs – so late, in fact, that he had no sweater in his suitcase to keep warm in the chilly conditions in Prague. “To be honest, I came from the States, I was there for four weeks and I’ve no sweater in the suitcase! It was 90 degrees Fahrenheit plus all the time in America and there was a good forecast all week here too, so you’ll see me in my polo shirt tomorrow.

The 46 year old Dubliner carded his best round of the week, a seven under 65, to share the lead with Pavan – who also carded a flawless 65 in tricky conditions – on 17 under.
“I feel like it was a day too early. It took a lot out of me, a lot of focus and I holed the putts that you’d like to be holing on a Sunday. I’m hoping there’s still another round in it but it was certainly one of those days that you’d like to get on a Sunday afternoon rather than a Saturday afternoon.

Harrington has dropped just one solitary shot all week as he tries to turn around a tough season in spectacular fashion.

Now 46 and mixing it with some of the young bombers on the European Tour this week, Harrington has found a groove with his driver.
“I always work on my length. Sometimes I get criticised for working on it but clearly you’re not going to compete on this golf course if you’re not going to hit it out there. Everyone on this course, especially the leaders going into today, were big hitters. You’ve got to get it out there for those par fives and if you’re not in range for some of the par fours with shorter clubs, they become difficult.

“It is a big-hitters golf course and that’s one of the reasons why I work on hitting it that far. I don’t want to be disadvantaged and turn up at a golf course where I feel I can’t compete, and I’m 47 next week and I’m hitting it further than ever.

It has been 2 years since Harrington claimed his last title at the Portugal Masters and he knows once he is in the mix come the back 9 on Sunday his experience will be crucial.

“In my mind I was trying to rationalise that I’ve got to get 20 under par for the tournament and obviously I got quite a long way down that road, we’re three ahead of the pack so hopefully we move ahead and get out there and have good front nines and have it as a duel between the two of us. That would the nice scenario but it very rarely is the nice scenario on a Sunday.”

Should Harrington deliver on Sunday in Prague and claims his 16th European Tour title only a couple of weeks before Ryder Cup wildcard selections will he give Captain Bjorn something to think about ? Not so says Harrington.
“I’m not in the running for Ryder Cup at all. This is clearly a different course than what we’d be competing on in France so even if I did show unbelievable form this week, it’s not comparable. I don’t deserve to be there and I’m leaving it to the young guys.

“I’ve had some Ryder Cups and played well in some Ryder Cups, enjoyed them, but it’s time for the young guys. If you look at all of the Vice Captains, we’re all pretty decent players but I think at this stage we’ve all realised we can go and compete, but it’s now down to the young guys to go out and do the real business at The Ryder Cup.”

The final day in Prague is set for an intriguing battle as Harrington seeks to join the 14th most decorated European Tour player in history, Mark McNulty, on 16 European Tour titles, while four-time Challenge Tour winner Pavan chases a maiden victory at the top table.

Gavin Green, meanwhile, retains hope of becoming the first Malaysian winner on the tour as he lies three shots off the leaders in outright third place, following a battling two under par 70. Scott Jamieson is a shot further back, on his own in fourth, while Ryder Cup hopefuls Eddie Pepperell and Thomas Pieters are both six shots off the lead in a four-way tie for 11th position.