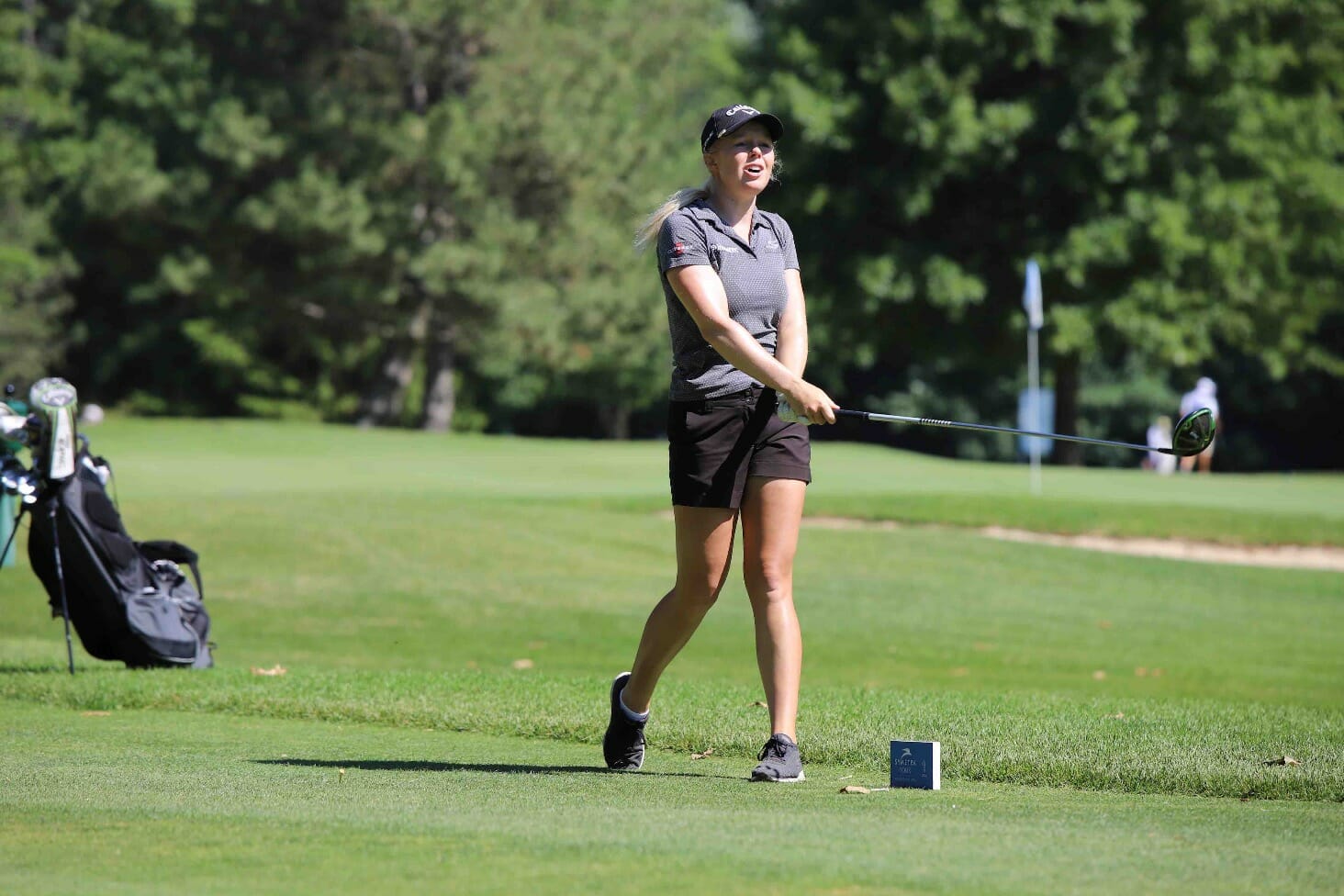 After an event dogged by rain and fog delays, Stephanie Meadow produced an almost flawless final round at the Firekeepers Casino Hotel Championship to finish in T16 position, with Leona Maguire just a shot behind her in T19.

Meadow, who sits second in the Volvik Race for the Card, had four birdies at 3, 7,9 and 14 which had her on seven under par and inside the Top 10, but the only blip on her card was a bogey on the 18th which dropped her down a couple of places as she finished on six under. But its another top 20 and it maintains her leads over Isi Gabsa on the OoM.

For Maguire it was a round of 71 on the final day, to add to her earlier efforts of 72 and 68 and a five under par total which got her inside the Top 20. She carded three birdies, including one at the 18th, and two bogeys and can once again be proud of her efforts.

At the top of the leaderboard the event came down to the wire and Sanz Barrio walked away with a one-shot victory at the finishing at 13-under-par.

While Sanz Barrio was having a day to remember, competition was a hole behind her the whole day in Augusta James who finished at 12-un­der-par. Sanz Barrio headed to the 18th with a two-shot lead and gave herself a little challenge she overhit her second shot behind the green.

After taking several different looks at her upcoming chip, Sanz Barrio flopped the perfect shot onto the green, but her ball stopped short of going in by a matter of inches. With a par inked on her final hole of the day, Sanz Barrio’s lead was locked in at 13-under, but James was right behind her with one hole left to go standing at 12-under.

James hit her second shot on 18 on the front of the green, with the pen nestled roughly 25 feet away in the back left corner. James needed to sink the long putt to force a playoff with Sanz Barrio, as it was down to just the two of them on the leaderboard at the end of the day.

With volunteers, fans, and players alike all waiting on James’ decisive putt, complete silence fell over the crowd. James’ putt was rolling with the perfect speed to the cup, and for a matter of seconds, it seemed like a playoff push was inevitable, but James’ putt inched just past the cup.

Having secured her second-place finish, James walked over to Sanz Barrio, and hugged the champion, and the two of them walked off the green, both of them champions in the hearts of the fans.

For Marta Sanz Barrio, she believed today would be a day her and her sister would never forget.

“I actually wished that she was playing, but to have her have her read my putts and calm me down, this is something we will remember for the rest of our lives,” she said.

With Marta Sanz Barrio crowned the champion on the day, Maia Schechter earned championship honors of her own with her victory as the Potawatomi Cup Champion. The Potawatomi Cup takes place during four events on the tour, taking place in South Bend, Harris, Battle Creek, and Milwaukee. Each player who plays in those four events is automatically registered to compete in the Potawatomi Cup. It’s a point-based system, and whoever finishes with the most points at the end of the fourth round will be the victor.

“It’s a really fun mini-series within the schedule itself,” said Schechter. “I won in South Bend, played well in Harris and Milwaukee, and today simply settled the score.”

Following the 15th tournament of the 2018 Symetra Tour season, the Volvik Race for the Card saw a fair amount shifting within the top-10. However, Dottie Ardina held strong at the top.

Nonetheless, here is a look at the current top-10 heading into the FireKeepers Casino Hotel Champion­ship at Battle Creek Country Club from Aug. 17-19 in the Great Lake State: