Snedeker cards 59 as Lowry and Gmac struggle at Wyndam

American Brandt Snedeker sensationally holed a 20-foot closing hole birdie to join one of the more exclusive clubs in golf in posting a sizzling 11-under par 59 on day one of the Wyndham Championship in Greensboro, North Carolina.

Snedeker, 37 commenced his round with a 10th hole bogey and then cut a swathe through the field with an eagle and 10 birdies from his fourth to 16th hole.
But the eight-time Tour winner, including capturing a maiden Tour title in winning the 2007 Wyndham hosted event, missed a birdie putt from six feet at his 17th before the excitement of seeing his 59th shot in the $6m event drop at the last.

“To have that putt on the last hole and to know what you are trying to do and that is to step-up there and have a 20-footer and know what it means as I was very aware what was going on, so to knock that putt in was very special,” he said.

“Now to know that I am part of a very small club on Tour, and not many people have done this is a really cool feeling right now.
“I stood on the 18th tee thinking to myself I will have no better chance than this to shoot a 59 and it’s really cool to now join a very exclusive club.
“But after missing the birdie putt on my 17th I had thought there goes my chance to tie -Jim Furyk in shooting a 58 so to make that putt on the 18 was very exciting and this is what we play for.

“Though in saying that there was no way I saw this 59 coming but luckily everything clicked today and to do it here and where I won my first PGA Tour and with Wyndham being my long-term sponsor is pretty nice.
“I am also now very aware there is a lot of golf to be played this week and in the grand scale of things this will mean nothing come late Sunday.”
One of Snedeker’s historic-making shots included ‘slam-dunking’ his second shot for an eagle ‘2’ at the uphill par-4 sixth hole that he was playing as his 15th.
Snedeker’s ball to an unseen green severely damaged the hole in holing-out from 176 yards and not realising he had holed the shot until he arrived at the green.
Finishing near the same time as Snedeker was Lowry and McDowell and with the duo managing a combined one eagle and four birdies.

Lowry, who had bogeyed his fourth, sent his second shot at the par-5 fifth hole to just three-feet for the easiest of eagle ‘3s’ but it was a nine-hole ‘all pars’ wait before landing a greenside bunker shot to a similar distance for birdie at the par-15th.
The Offaly man then dropped a shot at the 17th ahead of a closing par in a one-under par 69 and 10 shots more than Snedeker

Lowry arrived in Greensboro lying 139th on the FedEx Cup points list and needs to be inside the top-125 come Sunday night to retain full 2018/19 Tour membership.
But after his opening round showing Lowry’s projected to drop to 140th and needs to duplicate last year’s Wyndham result of seventh to hold onto his Tour card.

McDowell was projected to drop three places and to 146th on the standings after his no-frills level par 70.
Included in ‘G Mac’s’ score was three birdies and just as many bogeys.
The duo of Padraig Harrington and Seamus Power were out in the afternoon half of the draw. 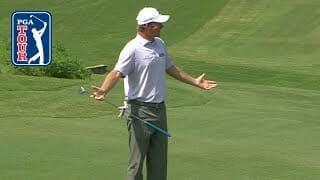