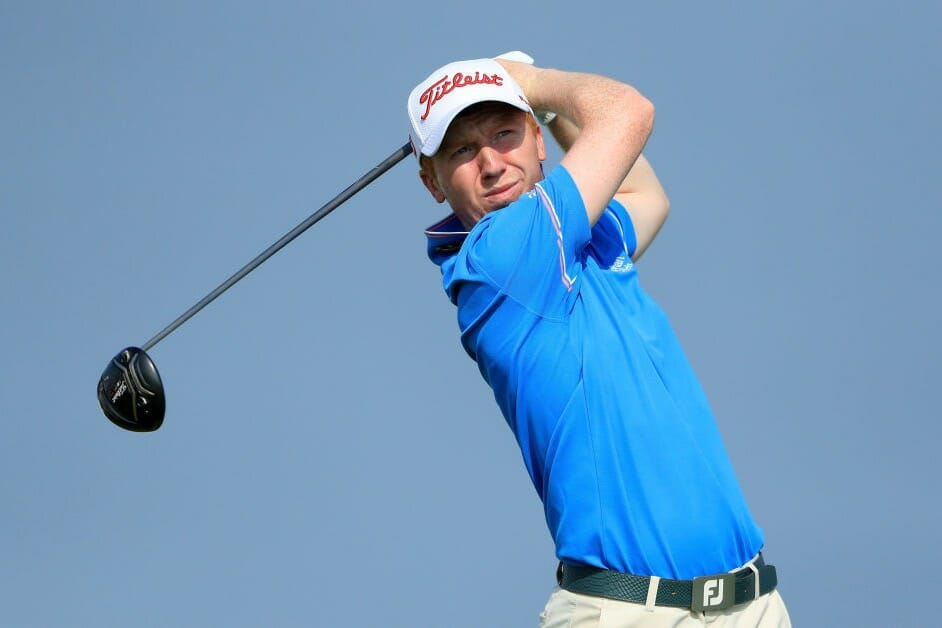 Gavin Moynihan continued his recent resurgence to form by posting a three-under-par 69 after day one of the La Vaudreuil Golf Challenge in France.

With the eyes of the golfing world firmly fixed on the Open at Carnoustie, the Dubliner made hay while the sun shone on the Challenge Tour, firing four birdies and just the one dropped shot to grab a share of 8th spot at the close of play.

That was one stroke better than Northern Ireland’s Michael Hoey who produced a solid opening 70 that included four successive birdies from the 2nd to the 5th.

Hoey, like Moynihan, is starting to show signs of his best stuff of late and currently in a tie for 16th, he’ll be hoping to improve on his top-10 finish in Italy last week with an even better result this time around.

Neil O’Briain remains in touch too after the Sunshine Tour Rookie of the year returned a one-under-par opening effort. The Old Conna professional has been in stunning form on the Regional circuit this season and he’ll be hoping that his consistent play continues to translate amongst stiffer company in France.

Of the other Irish in the field, Ardglass’ Cormac Sharvin (+1), Rosapenna’s Ruaidhri McGee (+1), Ballymena’s Dermot McElroy (+2) , The Island’s Paul McBride (+4) and Clandeboye’s Jonathan Caldwell (+5) all have work to do to ensure they make the weekend’s play.

A back nine birdie blitz by England’s Richard McEvoy handed him an opening seven-under-par 64 as he leap-frogged compatriot Paul Maddy to claim the lead at the end of day one.

McEvoy, playing in the afternoon groups at Golf PGA France du Vaudreuil, made the turn at three under after a bogey-free opening stretch.

The Englishman then turned on the style as he tackled the front nine – his final nine holes. Four birdies, including two in a row to finish, meant he breezed past Maddy into first place after he had earlier set the target at six under.

McEvoy, last year’s SSE Scottish Hydro Challenge hosted by Macdonald Hotels and Resorts winner, holed an excellent 15-foot birdie putt to take the lead on the last hole and he was pleased with his putting in Normandy after being left frustrated at last week’s Italian Challenge presented by Cashback World.

“I putted beautifully today,” he said. “I found the greens very slow in Italy last week and I struggled getting the ball to the hole, but this week they’re a lovely pace. I seem to have got the pace quite nicely at the moment.

“I was good all-round. I drove the ball very well and hit a couple of poor shots towards the end off the tee but managed to get away with them.

“The eighth hole is probably one of the only tee shots on the golf course where you can’t see where your ball is going to land, which makes it difficult.”

McEvoy’s eye-catching bogey-free round was particularly impressive as the wind began to pick up in the afternoon on a course which he believes ‘suits his eye’.

“It was very good,” he said. “I came off a bogey-free round of five under in Italy on Sunday and my game has been good recently.

“I love the course; it suits my eye quite well as it’s very similar to a British parkland course with the tree line so I’m very happy with my start.”

Englishman Maddy is joined on six under par by Christopher Mivis after the Belgian too carded a six under par 65 to sit a shot off the lead at the end of Day One.

Two off the top is Ross Kellett after the Scot claimed outright third courtesy of a five under par 66. Oliver Bekker, Jamie Rutherford and Peter Tarver-Jones are all on four under par, while a group of eight players sit a shot further back on three under.

Away from the top of the leaderboard, Italian Filippo Bergamaschi carded a hole-in-one at the par three third as he posted a level par 71. The 27-year-old sent a nine iron, with a slight draw, straight into the hole from 150 yards to record the second ace of his career.

Road to Ras al Khaimah Number Four Stuart Manley, the highest-ranked player in the field, is tied 16th on two-under-par.