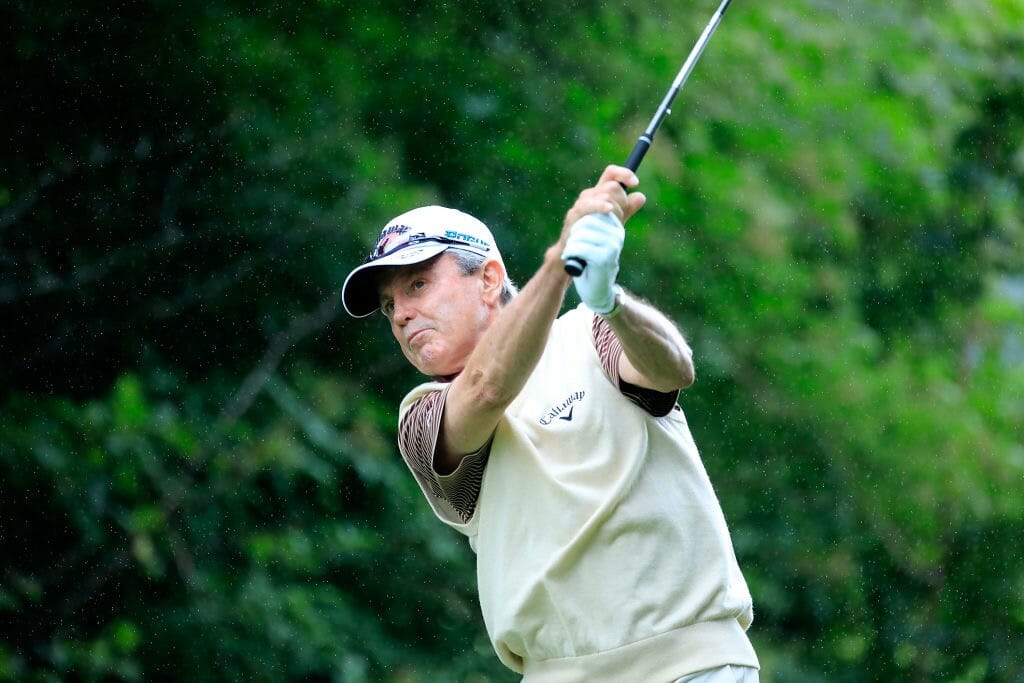 Mark McNulty returned a blemish free card that included an eagle and four birdies to finish the week as best of the Irish at the Swiss Seniors Open on the Staysure Tour.

McNulty’s six-under-par 66 catapulted him 17 places up the leaderboard into a tie for 7th,  just four shots behind winner, Jean-François Remesy.

Of the other Irish competing, Brendan McGovern enjoyed a typically solid week as he signed for a level par round today. However a triple bogey 6 at the 14th took the gloss off an otherwise clean card with the Headfort professional finishing in a tie for 30th at one-under-par.

After opening his week with a 67, Ronan Rafferty endured a disappointing weekend, adding a five-over 75 to his 71 on Saturday to slip into a share of 44th at three-over.

That was the same number as former Ryder Cup hero, Phillip Walton who enjoyed a fine day, signing off on his trip to Switzerland with a stunning 67.

At the head of affairs, Jean-François Remesy claimed his first Staysure Tour victory — winning the Swiss Seniors Open by a single shot after returning in a two under par 33 on the closing-nine.

The Frenchman began the final round tied for the lead, but after carding his first bogey of the tournament on the opening-hole, and another on at the par five fourth, he plummeted down the leaderboard as several players mounted a Sunday charge.

“I knew emotionally that it was going to be hard because I had not been in this position for a long time,” the 54 year old said. “The result was two bogeys after four, but I stayed focused on my game and said to myself ‘okay you have to go through some emotional stuff.’”

Soon after the early blemishes, there were five players ahead of Remesy and it appeared the Swiss Seniors Open trophy would be going to someone else.

“But I told myself ‘stay focused, stay focused’ and fortunately, the experience of so many years in contention and winning big tournaments helped me a lot at the end.”

Sitting on 11 under par for the tournament, Remesy had an opportunity to build a late, two-stroke cushion at the reachable par five 16th hole. However, after finding the greenside bunker with his third, and only managing to get his fourth to within ten feet, the possibility of a four-way play-off seemed likely as Jarmo Sandelin, Miguel Angel Martin and Phillip Price stood on ten under par.

As Remesy eyed the putt, it was clear that a critical moment in the tournament had been reached. After holing holed the par-saver, he let out a burst of emotion. “That was key — that putt was very key. I was really moved, and I tried to show it to Price, but he holed his putt too. We had a good little battle and it was really interesting.”

Leading by one on the 18th tee, Remesy managed to safely find the green in regulation, and two putts later, secured an emotional victory, showing the large Swiss galleries how much the win meant to him.

“I said yesterday that these past three months I’ve been working hard, and the results have come, so there is no surprise. I’m happy. I’m very happy.”

The Staysure Tour will now travel to Vorbeck, Germany for the WINSTONgolf Senior Open, which runs from July 13-15. Remesy will join the field along with fellow countryman Jean van de Velde as well as 1991 Masters Tournament Champion Ian Woosnam.