McIlroy continues to walk off frustrated after a Friday 73 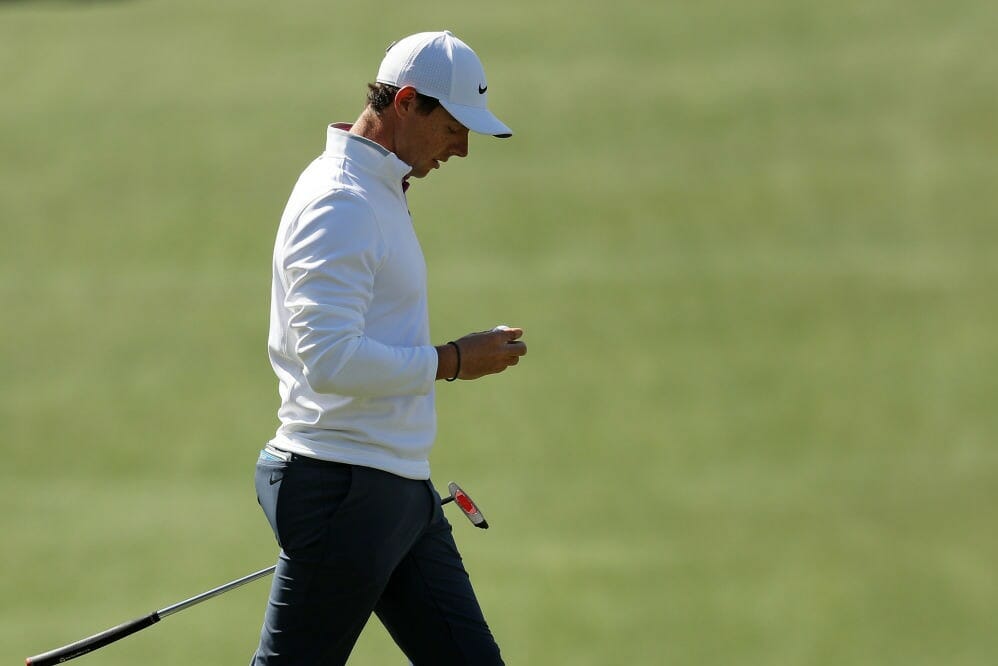 For a second day running Rory McIlroy was left frustrated after posting a second round 73 at the Dubai Duty Free Irish Open at Ballyliffin.

The tournament host heads to the weekend admittedly just a handful of shots from the lead but again it was a day McIlroy’s stature as a four-time Major Champion should have seen him finish with a sub-70 effort.

Instead, McIlroy continued to frustrate not only his huge Ballyliffin fan base but it was a display that again seemed to suck the enthusiasm from the heart of the World No. 8.

That was no more evident in bogeying his closing two holes and with McIlroy ending his round with his right arm outstretched on the tee to signal a wild drive right into the Ballyliffin rough.
It was shot that led to one SKY’s more-respected Scottish-born pundits to use the ‘U’ word.
Then when McIlroy did find the green and was staring at saving par, his par attempt lipped-out.

“I’m still simmering a little bit after that finish,” he admitted.

“Just two poor tee shots on the last two holes and just put myself out of position. It was hard to make par from there.
“I felt like I hit the ball okay again today. It’s definitely going in the right direction, but I just didn’t hole anything, really, again.
“I did hole a nice one for birdie on 6 but that was really it. I finished out okay.
“I am just going to have to hit it closer and hole a few over the weekend if I want to have a chance.”

Taking McIlroy’s 2016 Irish Open victory on the ‘parkland’ K. Club course as a yardstick, he was seven-under for his opening two rounds.

A year earlier, and in hosting the Irish Open for first time and at Royal County Down – a course you would expect McIlroy to know like the back of his hand, he missed the cut with scores of 80 and 71.
Then last year at Portstewart McIlroy crashed out of the weekend with a 72 and 73.
As the fairways of the Pad Ruddy designed course increasingly play more like cricket pitches it is only testing McIlroy’s temperament with every hole he plays.

“It’s tough and as I kept saying all week, it is a matter of putting your ball in play off the tee and if you can do that, you can score and you have control of your golf ball from the fairway,” he said.

“When you don’t hit fairways, it’s tough to hit the greens. It’s tough to get it anywhere close to the holes.

“Those last two bogeys were bad tee shots and out of position from there. The rest of the round was okay. I felt like I drove the ball well for the most part, hit my irons pretty good.
“I missed a couple of shots in the wrong side which cost me but yeah, it’s just another one of those days where I couldn’t quite get it going.

“That’s all I can do is keep giving myself those chances and not get too frustrated. If I can keep knocking on the door, hopefully sooner or later it will turn around.”
In contrast to McIlroy, Masters champ Danny Willett’s emerged from a two-year victory drought to brilliantly muscle his way into contention heading to the weekend round of the Dubai Duty Free Irish Open at Ballliffin.

Willett, 30 fought back from an early round double bogey to post a two-under par 70 and move into a clubhouse share of second on six-under par in continuing ideal conditions on the acclaimed Pat Ruddy designed Glashedy course.

The Sheffield-born Willett has been in a virtual golfing wilderness since early 2016 when he won the Dubai Desert Classic and then stood-up to be fitted with a Augusta National members green jacket.
The closest the currently World No. 442, and who had reached a career high of No. 9 in the world in winning the Masters, has again come to tasting success was sixth late last year in the Hong Kong Open and with Willett showing recent good form in ending T8th in last month’s Italian Open.

“When you start seeing the shots, you start to play slightly more clever golf,” he said.
“When you’re struggling, it’s very hard to hit it — you’re trying to hit it to safe sides, especially golf courses like last week and this week.
“It gives you a little bit of a buffer in there. Yeah, like I said, the results don’t always come but it is nice that we’ve got a couple of nice rounds together here and we’re playing the next three weeks.

The only downside for the likes of Willett and ‘Three Lions’ golfing compatriot, Lee Westwood and just a stroke behind Willett, is they will on course Saturday when England tackle Sweden.
“It will be all right. I’m sure they will do all right without me watching,” said Willett.
“We’ll have to get the television crew to keep us updated”.

MEANTIME — Scotland’s Russell Knox produced arguably the ‘shot of the day’ in trying to throw an apple core into the rough.

Know sheepishly made his way to the apple core and with fans still laughing what they had witnessed.
And the Scot’s reaction:  “Well, at least I buried the putt”.