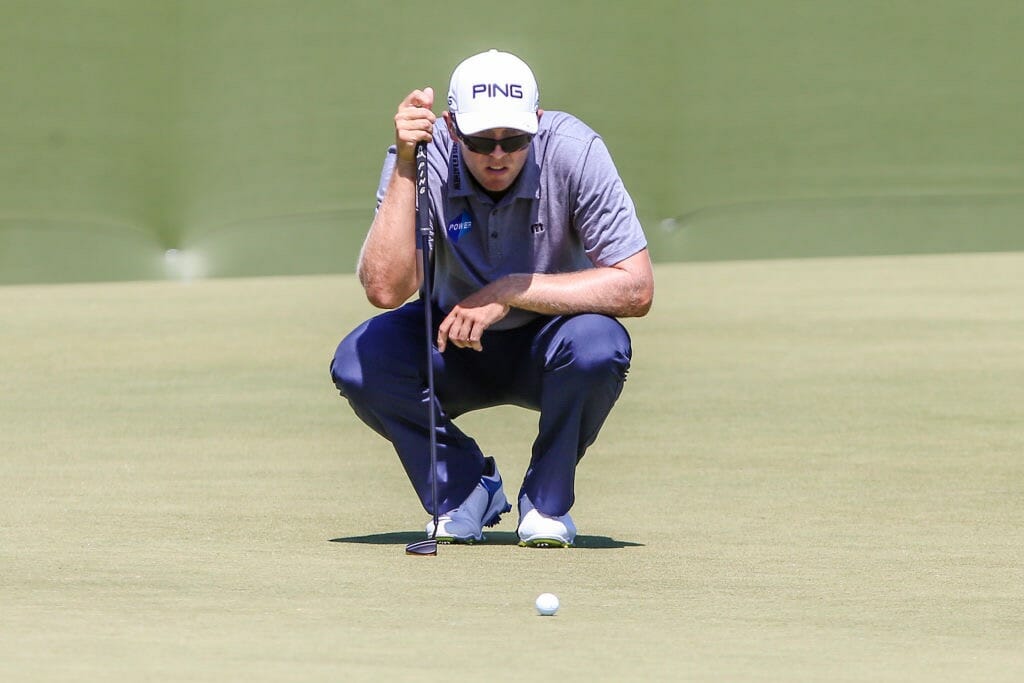 Seamus Power superbly regrouped after his long-time caddy was forced to withdraw before tee-off, to brilliantly grab the clubhouse lead on day one of the FedEx St. Jude Classic in Memphis, Tennessee.

Power posted six birdies, including a six-foot gem at the last, in a sizzling five-under par 65 in heatwave conditions on the TPC Southwind course.

The West Waterford golfer, contesting the event just for a second, is one shot ahead of an eleven-way tie for second place  in the clubhouse including next week’s defending U.S. Open champion, Brooks Koepka and Phil Mickelson who needs a U.S. Open triumph to become only the sixth player to win the coveted ‘Grand Slam’.  Mickelson capped his round with a 12th hole eagle in holing a 12-foot putt.

Power’s day began in some confusion when regular caddy John Rathouz, a diabetic, indicated he was not fit enough to carry Power’s clubs with Rathouz having organised fellow PGA Tour caddy and good friend, Danny Rennison to be on stand-by.

“John rang me last night to say he wasn’t feeling well and while he came here this morning he still was feeling poorly and given also it was going to be so hot I was happy to fill in,” said Rennison.

“I know Seamus so well and he agreed it was good to be able to help both of them out as I finished-up with the player I was working with and was here in Memphis, so it worked out well and very pleased for Seamus but now I need to see how John is feeling.”

Power arrived in Memphis last weekend to tee-up in a 36-hole U.S. Open qualifier and then after missing out by a shot in being among the leading 11 players, the West Waterford golfer was thrown into a play-off with American Scott Piercy for the first Shinnecock Hills alternate spot.

The duo went six holes before Piercy won through with a birdie.

On Thursday, Power grabbed birdies on his first, third and fifth holes and then sent his 128-yard tee shot on the island green par-3 11th hole to five-feet and rolled in the birdie. He also birdied the 16th to tie the lead and broke the then deadlock with another 128-yard shot to three-feet on 18.

“I played very well. It’s a great start. It’s a golf course I like, I played here last year and it kind of suits my eye, so I kind of feel good going out,” he said.

“But it’s tough to get out of there with 65. Everything really, everything was pretty good. I putted well and hit it well off the tee, so that gives you a lot of chances around here with the rough that you really want to avoid.”

And after playing 42-holes on Monday, Power says he still feels pretty fresh in the sapping sauna-like Memphis weather.

“I felt in decent control, felt pretty good mentally and was able to take some chances It’s nice to be leading but there’s no prizes given out after round one but, you know. It’s just the first step and there’s so many good players right behind you, you know they’re going to make a lot of birdies so you just have to keep going.”

Padraig Harrington was left ruing back-to-back closing bogeys on route to a two-under par 68 in making his 11th appearance in the Memphis event, having made his debut in 2007.

After missing the cut in his past two visits he got the start he wanted with back-to-back starting birdies and then went to three-under par in landing his 144-yard second shot at the par-4 sixth hole to four-feet to knock in a third birdie. He then went into a share of the lead on four-under par with back-to-back birdies at 11 and 12th, none better than at the island green par-3 11th when Harrington thrilled those following in holing a 40-footer.

Harrington then went bogey at 14, birdie at the par-5 16th but then took three shots to get down from just off the green at the 17th for bogey.

At the last, Harrington found water left off the tee on route to what was a fourth bogey.

Shane Lowry, contesting the event for a first time, had got back to one-under par through 11 holes with three birdies and two bogeys but struggled in taking a bogey on 13, a double on 14 and he then bogeyed 15 before a 16th hole birdie for his two-over par 72.