Smyth six back as McGovern & McGinley fade in Denmark 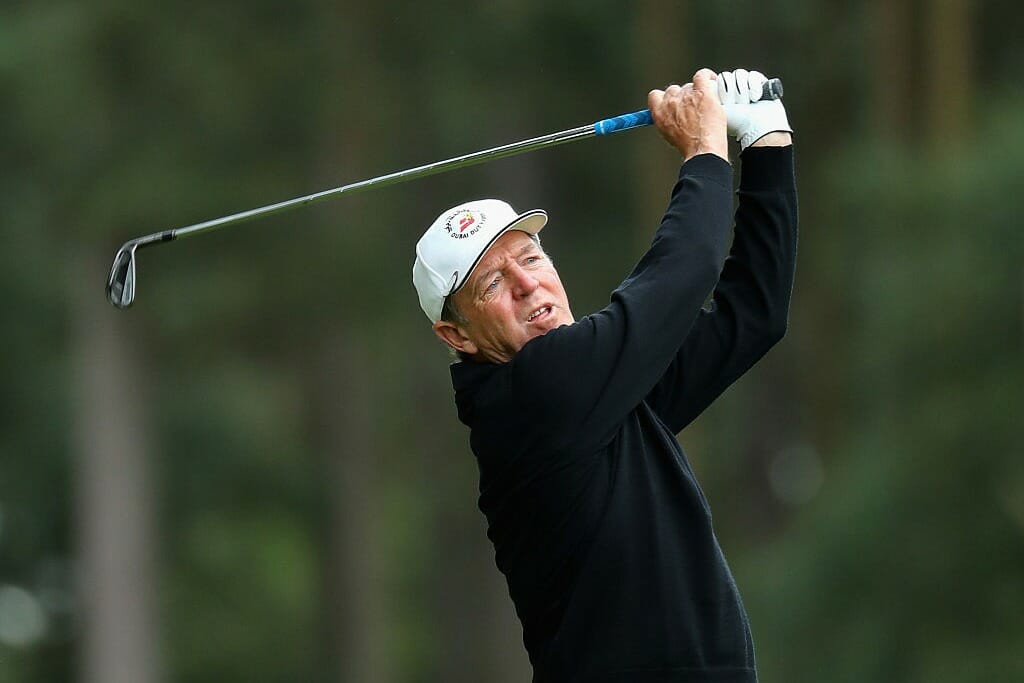 Des Smyth was the only Irish challenger to break par on a frustrating afternoon for our seniors at the inaugural Shipco Masters promoted by Simon’s Golf Club in Denmark.

For the second day in a row, Smyth stormed home with three birdies in a blemish free 35 strokes on his back nine to return a one-under-par 71, good enough for a share of 8th spot with a round to go in Copenhagen.

With leader, Englishman Peter Baker firing another 67 to race clear at 10-under-par, the news wasn’t so good for Ireland’s other contenders after both Paul McGinley and Brendan McGovern went backwards on moving day.

Former Ryder Cup Captain McGinley birdied his final hole to return a one-over-par 73, dropping ten places to a share of 19th while Headfort’s McGovern endured a frustrating afternoon as he fell 18 places down the leaderboard into a tie for 24th after a three-over-par 75 today.

Philip Walton finds himself well out of the reckoning on plus eight having added a 75 to his opening 77.

England’s Baker will look to win his first Staysure Tour title as he heads into the final round with a two-shot lead.

Baker, who won three times on the European Tour, carded a perfect blemish-free five-under-par round of 67 to move into top spot.

He has not dropped a shot over the 36 holes and kept his cool in the baking sunshine to leave himself in pole position for his debut win on the over-50s circuit.

His round got off to the perfect start with a birdie on the first followed by ten consecutive pars to remain at the top of the leaderboard after an early start on Moving Day.

A “really good birdie at number 12 on the par five” set Baker on course for a strong finish with back-to-back birdies at 12 and 13, where his highlight of his round came with a monster 30 foot birdie putt on the 12th hole.

The 1993 Ryder Cup player took advantage of the par five 17th with another birdie to take him to ten under par overall and lead at Simon’s Golf Club.

After teeing off first on the second day in Kvistgård, Baker was delighted to card such a low score and set the bar for the chasing pack, especially without dropping a shot over the two days.

“I’m delighted with it. I was first off this morning which was actually a good time because it was a touch cooler,” he said. “It was good to get going and I got off to a great start and I kept it going by giving myself lots of chances. I made some of them and didn’t really get into too much trouble.

“It was nice to get around without too much heat for the first five or six holes. It was a cracking day and it was great to play golf.

“I think I’ll have a reasonable chance tomorrow and be up there with the leaders. I’ll need to play really well like you always need to do when you want to win and hope it is your day.

“It’s certainly a very rare thing for me not to drop a shot – long may it continue. We’ll see what happens, but I’m sure I’ll get rid of that record tomorrow, but I’ll just do my best out there.”

Baker’s early score was hotly pursued by fellow 1993 Ryder Cup teammate Barry Lane, but the Englishman was not able to join him at the top even with a birdie-birdie finish as he sits in second place on eight under par after a three under par round of 69.

Fellow Englishman Paul Eales lies third behind Baker after he made five birdies on his back nine. However, the best round on Moving Day at Simon’s Golf Club came from the 2017 John Jacobs Trophy winner Clark Dennis. The American fired a six under par round of 66 which included seven birdies – four in the final four holes.