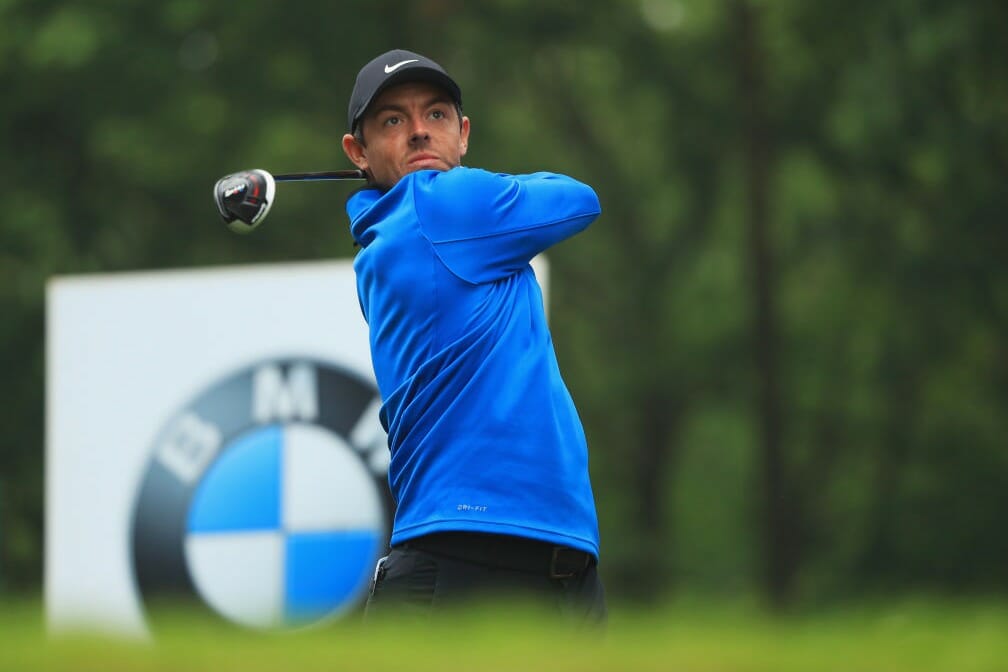 All eyes were on four-time Major Champion Rory McIlroy, as the BMW Championship got underway at Wentworth and the Holywood superstar didn’t disappoint.

Returning to Wentworth for the first time since 2015 after being forced to withdraw through injury last year, Rory delighted the huge crowds with an impressive five-under-par 67 to move to within two strokes of the lead.

The 2014 BMW PGA Champion carded seven birdies and was disappointed to have missed a short birdie putt at the final hole, but the fans will no doubt be out in force on Friday morning in support of the former World Number One, who was understandable pleased with what his game produced back on familiar soil.

“It was good to see golf like that,” acknowledged a smiling McIlroy. “It was good to see the shots that I hit, and the drives that I hit, I put it in play a lot more. I still hit a couple of loose shots out there but I guess you can’t expect perfection all the time. You have to sort of take it as it is. I played a lot better today than I have done the last couple of weeks, so it’s a good step in the right direction.

“My wedge play was really good and that’s something I’ve tried to work on continuously over the course of the last 12 months, trying to get that better. Any time I had a wedge in my hand today, I felt I had a realistic chance for birdie afterwards. If I can keep doing that and if I can keep putting it in the fairway like I have been, that’s really positive signs going forward.

“Obviously there’s the next three days to worry about, but I’ve got a few big tournaments coming up in the States, and then a very busy summer with a lot of important stuff coming up. So if I can keep playing like this, it should hopefully be a good summer.”

Shane Lowry looked set to surpass McIlroy as he teed up on the par-5 18th at five-under-par also. The Clara man had fired seven birdies of his own to that point, however he would have been left with a bitter taste in his mouth at dinner after events at the last.

Lowry found trouble off the tee and was forced to take a penalty before compounding the error when finding the water with his fourth. If ever there was a good seven, his ten-footer that he holed to save double was it, and at three-under-par he remains right in the mix at a venue on which he thrives.

Paul Dunne was among some 20 players who managed to break par early on the opening day at Wentworth. Dunne ended his round near 1pm with a one-under par 71 on the famed West Course in leafy Surrey.

England’s Matthew Fitzpatrick, who competed alongside Dunne, birdied three of his opening four holes in a five-under par 67 while the third member of the group, four-time Major winning Ernie Els struggled with a 75 and on the golf course he redesigned.

Dunne’s round was a mix of three birdies at the fourth, 11th and 12th holes while he dropped shots on the third and final holes after going for the par-5 18th in two only to see his second fall short into the water hazard guarding the green.

“It was a pity at the last as I played the difficult holes well and while I missed a couple of chances coming in, I managed to scrape it around with a 71,” he said.

“The last was a strange one as I thought I had enough club to carry the trouble but it didn’t but then anytime you shoot under par around Wentworth is good.

“I would have preferred for my score to be a little better but it is what it is”.

Even recalling that he led the way to success in two Open Championship qualifiers on the Woburn course located just to the north of London was reassuring, but Dunne maintains that Wentworth is a different beast.

“Wentworth is a lot more difficult as it requires a lot of attention from start to finish, and you have to drive the ball really well while the greens, and with the new sub-air system, are always firm,” he said.

“The course just tests all parts of your game.

“I am happy with the way I hit the ball but then I also didn’t putt particularly that well today while I left of lot of chances out there.

“Hopefully, this 71 will be my worst score of the week.”

Padraig Harrington, who was out in the group immediately ahead of Dunne, signed for a disappointing six-over par 78 that included three birdies, at the 11th, 16th and final holes, while he also posted five bogeys and two double bogeys.

In fact, Harrington made the turn in 41 and came hole in 37 on a golf course, and despite further changes, that clearly stil does not suit his game.

“I just didn’t hit it very well off the tee and I actually chipped-out four times today from the trees and I don’t think I have ever had a round in my life when I’ve had to chip-out that many times,” he said.

“It is a tight enough golf course at any time but you do have to drive it well around here as that is the big key and I didn’t.

“It’s a lovely golf course now after the recent changes but you cannot second guess out there except that the bunkers are a bit hazardous (smiling) and some people like that.

“But outside of that the golf course is superb though it’s not one that suits me.”

Lucas Bjerregaard carded a flawless seven-under-par 65 to take the lead after the opening round of the first Rolex Series event of the European Tour’s 2018 Race to Dubai.

Dane Bjerregaard entered the week on the back of a strong run of form, with back-to-back top tens in his last two appearances, and he carried that momentum into the opening round on the pristine West Course.

A birdie at the par three second hole got him up and running before picking up three more shots for a front nine 31, and three more gains on the way home – including a closing birdie at the par five finishing hole – handed the London-based 26-year-old a one-stroke lead.

Tied for second place were South African duo Dean Burmester and Darren Fichardt, who have six European Tour titles between them, after a pair of 66s.