Anything but a grind for Grehan who leads at Europro opener 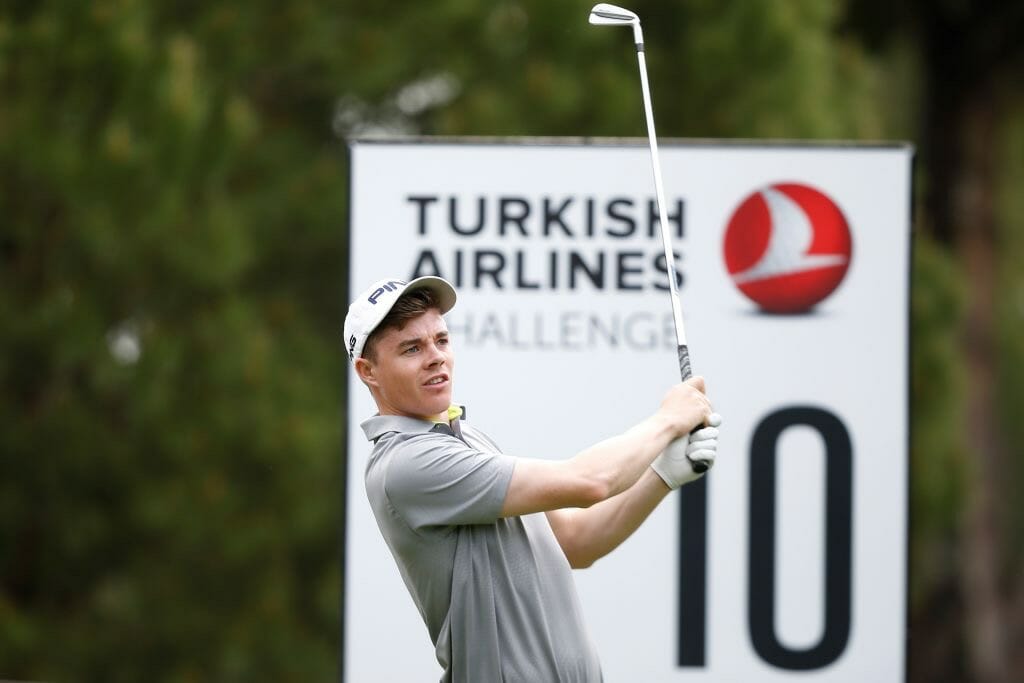 Stuart Grehan birdied the last to take a three shot lead into the final round of the Motocaddy Masters, the first event of this year’s Europro Tour season.

The Tullamore rookie looked right at home on Frilford Heath’s Blue Course in posting six birdies on a blemish-free scorecard to hold a commanding position overnight.

In pristine scoring conditions, Grehan took full advantage with the youngster in confident mood ahead of tomorrow’s final round.

“I played really nicely today,” said the leader. “It could have even been a few better in the end. But I’m really comfortable out there, comfortable with what I’m doing and feeling good with my swing.

“It’s been nice getting myself into contention a few times already this year and it makes it easier every time an opportunity presents itself. I’m really looking forward to tomorrow now.”

Talking to him, he sounded at ease with his lofty position and when asked about tomorrow, Grehan’s approach is singularly focussed on his own performance and that of no one else’s.

“I think it’s a three shot lead going out but I’m just looking to get to a number in my head and if I get to that I’ll be happy. If that gets me to the top of the leaderboard at the end of the day that’s great but I’m just going to stick with what I’m doing and not worry about anyone else.”

At one point Grehan could have had compatriot, Niall Kearney, for company in the final group; a costly triple bogey seven at the last for the Dubliner putting a dent in his chances, just as he looked to be mounting a challenge of his own in the glorious sunshine at Frilford Heath.

The Royal Dublin man, who finished 11th on last season’s order of merit, had got it to five-under-par playing the last, just one shot off the lead at the time, when his good work was unravelled by the disheartening finish.

However, having won the pro-am with his four-under-par 68 on day one, a round that included an eagle, four birdies and just the one blemish, Kearney is confident that at two-under-par, he’s still capable of mounting a challenge for the title.

“I felt like I played a lot better than that score today,” reflected Kearney. “To finish with a triple is obviously annoying as I was only one shot off the lead on the last tee.  However, I know my game is good and there’s no reason why I can’t go low tomorrow and have a chance to win the tournament.”

Kearney’s been putting in the work over the winter, spending much of the never ending cold snap honing his game in Thailand, while he’s hoping that his recent stint on the Mediterranean Tour might pay dividends early in the season too.

“My game is good and has been good the last few weeks,” he continued. “It’s always a good chance to win the first event as guys are maybe a little rusty after the winter so we’ll see how it goes.

“I like the course. It’s a great layout but it’s playing unbelievably firm which is why scoring is difficult. I’m looking forward to getting it going again tomorrow.”