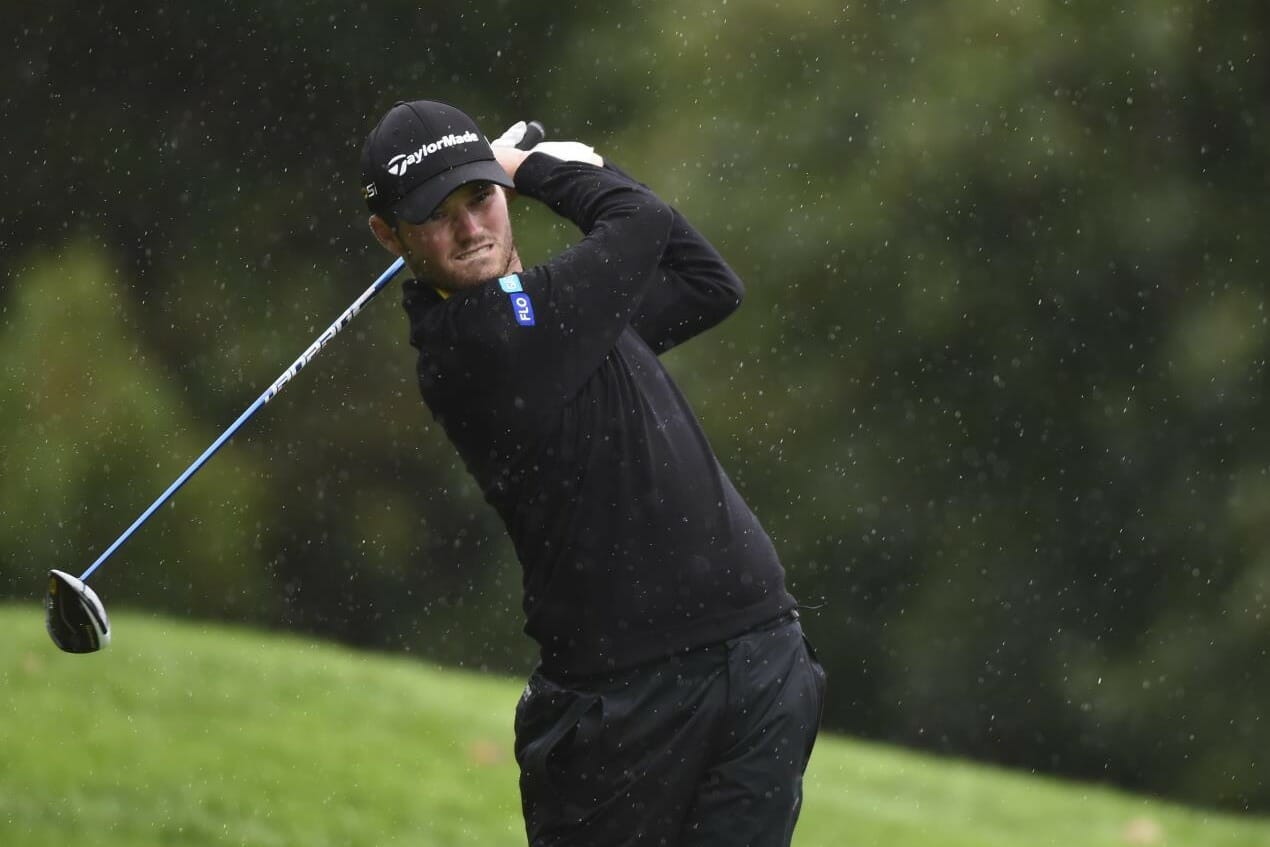 Cormac Sharvin blew away the rest of the field by shooting a red-hot seven under par 65 in the opening round of the Challenge de España.

The Ardglass carded seven birdies and no bogeys as he drew clear of the rest of the pack after a morning of tough scoring conditions in Spain.
Starting his round on the tenth tee, the 25 year old shot a three under par 33 on his front nine before carding a birdie on the first hole – his tenth – to move to four under par.

Sharvin carded his fifth birdie on the par four fifth hole to move clear of his challengers and successive pars at the sixth and seventh left him at five under par with two holes to play.
And he finished with a flurry. First, he birdied the 522-yard par five eighth before the same outcome occurred on the final hole as he exquisitely chipped in from the back of the green to sign off with a two.
With the cold temperature and high winds, Sharvin quipped that it was like playing back home in Ireland after signing for an impressive 65.

“It’s just like being back home, being back in Ireland,” he said. “It’s nearly like being an amateur again and I just hope I can continue playing how I am.
“I think the greens are really nice, they’re a little bit quicker than last week.
“After the rain they’ve had, they were putting really nicely this afternoon – well, I managed to find the hole a few times today so I can’t complain!”

Despite admitting that it was tough to score at Izki Golf, Sharvin believes there were chances to be taken and was pleased to capitalise on his good shots.
“I just think there’s a lot of chances out there if you play well and every time I hit a good shot I managed to convert,” he said. “That equated to a really good round.
“I hit seven birdies and no bogeys, which is quite a nice score out there considering it was pretty tricky at times. My putter was pretty hot and it was nice to chip in at the last.”

Six players, including Swede Oscar Lengden and France’s Julien Quesne, shared the lead on three under par after the morning groups finished at Izki Golf.
The temperature was just four degrees Celsius when the first groups began their rounds with wind swirling through the Urturi countryside.
Joel Sjöholm, playing in the first group of the day, started quickly by registering two birdies in his first three holes while countryman Lengden carded an eagle on the par five third hole to share the lead on three under par.

Dutchman Wil Besseling started his round with four successive birdies to take the lead before a bogey on the ninth dropped him back to three under par, which is where he stayed following a level par back nine.
As the day progressed, the weather showed small signs of improvement. Sunny spells and a slight rise in temperature gave the afternoon groups hope of shooting low and stealing a march on the players already in the clubhouse.

Adrian Meronk of Poland carded four birdies in his first five holes to take the outright lead but two bogeys before the turn meant he dropped back into the pack.
With Sharvin in the clubhouse on seven under par, the remaining players in the field had a target to aim for and after his back-to-back bogeys on the front nine, Meronk carded two birdies on the home stretch to sign for a 67 to sit two behind the Northern Irish pace-setter at five under par.
German Nicolai Von Dellingshausen, playing in the last group of the day, also carded a five under par 67 which included four successive birdies in his back nine to share second place with Meronk.
One shot behind the duo in tied second is Spaniard Jacobo Pastor, who sits in fourth position following a four under par 68.

Of the other Irish in the field, Michael Hoey was the only other to break par as he carded a one under Par 71. Ruaidhri McGee opened with a level par 72 to sit in 43rd with Conor O’Rourke opening with a one over total sitting in 63rd. Jonathan Caldwell carded a 2 over 74 while John Ross Galbraith sits back in 112th after carding an opening 76.