Harrington backs Rory to one day wear a green jacket

With the dust now firmly settled on Rory McIlroy’s most disappointing Sunday at Augusta, three-time Major Champion, Padraig Harrington, has backed the 28-year-old to put the experience to good use and one day complete the career Grand Slam.

Speaking exclusively to IGM at the launch of the The K Club’s Irish PGA Pro-Am competition on the famous Ryder Cup Course in Straffan, Co. Kildare, the eternally-positive Harrington believes that despite the obvious initial heartbreak, McIlroy should take great encouragement from putting himself in a position to win once more.

And with time on Rory’s side, Harrington insists that if McIlroy harnesses his immediate frustrations into a positive outlook towards future Masters tournaments, that it won’t be long before the God-given Holywood talent is donning the famous green garment in the Butler Cabin.

“It was not just a disappointing day for Rory but for everybody in Irish golf”, Padraig began. “There were huge expectations on Rory going into the final round and it just didn’t happen for him. The reality of it is, if Rory puts himself in that position every year he will be very happy as he will win plenty of Green Jackets.”

“He should walk away thinking, I got myself into a great position and it just didn’t happen.”

Harrington has been around long enough to know that the percentages will one day work in your favour, and assuming McIlroy stays fit and patient, he believes that it’s only a matter of time before the four-time Major Champion finds himself in contention entering the famous back nine once more.

“We know in golf, its all about giving yourself as many opportunities as possible to win”, continued the Dubliner. “Lots of things happen on final days of tournaments that are totally out of your control. The real way to win is to give yourself loads of opportunities to win and it will fall into place enough times.”

“This was just another opportunity for Rory. If you give him that position going into Sunday next year or the year after he would happy. He has just got to sit patiently and wait for the next chance.”

“The unfortunate thing is its just one tournament so he has to wait a year but he will probably have 15 or so more years playing in a similar situation and if he gets himself into that position every time he will win plenty of them.” 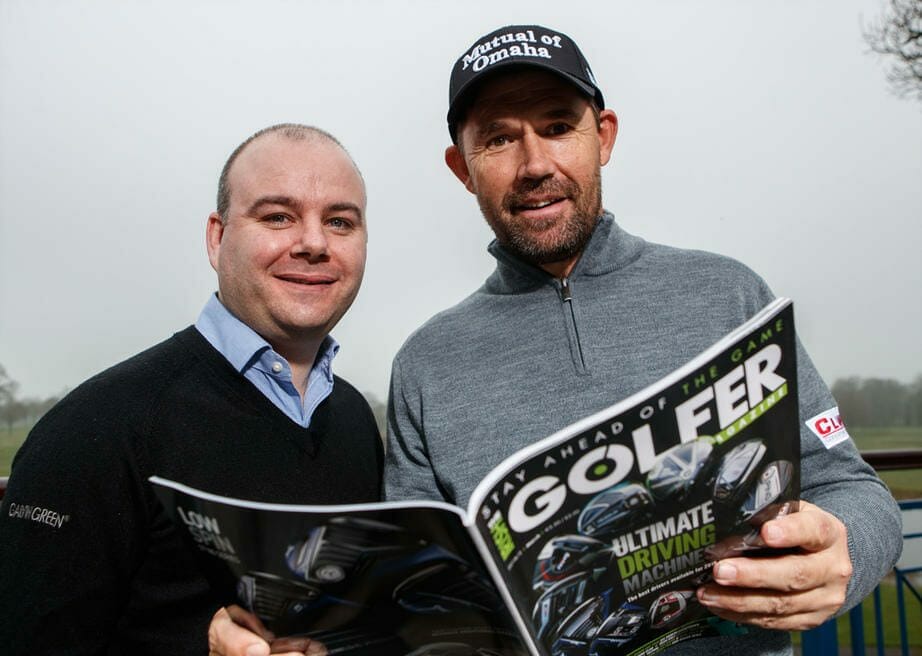 Above – Peter Finnan of Irish Golfer with Padraig Harrington

The key is positive thinking, something Harrington has in spades. The experienced campaigner just hopes that McIlroy can see through the cloud that’s hung over his Augusta ambitions of late to a clear picture of the future that won’t always involve disappointment.

There’s a reason so few players have won the career Grand Slam but if McIlroy can overcome the mental block restricting his fluidity at Augusta, there’s no doubt that he has both the game and the talent to win enough Green Jackets to fill a Kardashian’s wardrobe.

“He has to look at the positives from this”, stressed Harrington. “You can’t look at it like a one off situation and assume that because of the way it went down on Sunday that this is the way it always goes down”

“I was watching it on TV and we were not expecting it, but the reality of golf is it often happens like that. I think people read too much into one round of golf like that and you can’t draw conclusions on just one round.”

“It can’t be looked at like an individual performance on one day, it has to be looked at in the grand scheme of things. Who wouldn’t want to be in that position? If you keep giving yourself opportunities the averages say it will eventually work out in your favour.”

Thankfully for Harrington, he saw enough in McIlroy’s immense post-round attitude that would suggest he has the mental toughness to put himself beneath that exposing spotlight again, with golfing immortality the reward for coming through it unscathed.

“I listened to Rory’s interview afterwards and I do think he spoke like that and was taking some positives away from the week, what he said was spot on. He will have plenty more chances to win around Augusta National.”