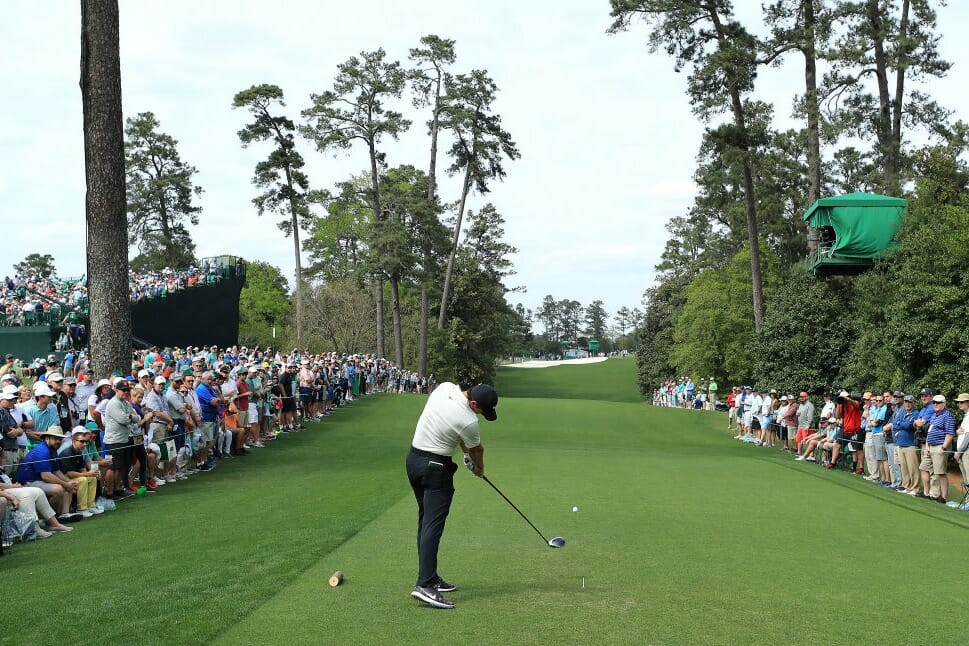 Seven years after a 21-year old McIlroy imploded on the final day of the Masters a clearly more patient Rory McIlroy finds himself well in the hunt to claim the one Major Championship to have eluded him going into the weekend at the 2018 Masters.

A one-over par 71 handed McIlroy a share of third place at -4 heading into moving day at Augusta National just five off the lead.

Playing in his 10th Masters, McIlroy remained calm in the very testing morning conditions that cut many of the world’s best down to size.

“The conditions today were a little more difficult than they were yesterday.  You know, the breeze was up a little bit.  I felt like the pin
positions were a little tougher.  It was tough to get it close to some of those pins,” he said.

“I’m pretty happy with how I started.  There were a few birdies and a few bogeys thrown in there, but I steadied the ship after the sixth hole.”

McIlroy had fired in two birdies in his opening six holes but dropping shots on one, four and six and he stood on one over par for the day. From the seventh on he was blemish free, picking up shots on 13 and 14.

It could have been better for McIlroy as he gave up two gettable chances at birdie on 17 and 18. That said he is in a perfect position sitting just five back and playing in the penultimate group with Henrik Stenson for moving day.

“I was a little disappointed walking off the 18th green,” added McIlroy. “I had two good chances on 17 and 18 that I didn’t convert, but overall, 71 out there today was a pretty good score and obviously in a nice position going into the weekend.”

When the Holywood man was quizzed on what his focus should be heading into the weekend his answer was simple.
“Stay patient.  Birdie the par 5s.  Keep your putts on the high side of the hole and hope for the best”, he said laughing.

A fast start is all McIlroy has been missing over his last five Masters appearances and he knows he is right where he needs to be looking into the weekend.

“Being up there around the lead going into the weekend, it’s a good position to be in.” he said. “I feel relaxed.  I feel good.  You know, I’m constantly having a conversation with myself about staying in the present and just one shot at a time and all the cliché stuff that you hear about. But it’s true.  You know, that’s all I’m doing.  I’m trying to get up there and hit the best shot that I can, and after that, I’ll go about what’s the best way to hit the next shot and the putt.”

“I’ve been pleased with how I’ve felt and my thought process and where I am mentally, I’ve felt really good about that.”

“I feel like I don’t have to swing my best to play my best golf, but if I can think the way I’m thinking right now and stay in that mind set, that’s when I’ve been able to produce my best results”.

Leading going into the weekend is Patrick Reed after the 27-year-old managed the best score of Friday’s second round, a 66 that got him to 9 under par, providing a two-shot lead over Australian Marc Leishman.

Reed has taken full advantage of the Par 5s this week and is the only player in the field that has birdied every one of them for the first two rounds. Despite finishing runner-up behind Justin Thomas at last years PGA Championship which is his only Top 10 at a Major , Reed was in a very confident mood looking forward to the pressure the weekend will bring.

“Everyone wants to win, and if you don’t believe you can win them, then you probably shouldn’t be playing. I believe that if I play the golf that I know how to play, that I can win majors. And it’s just one of those things – I have to go in and not get ahead of myself and go into tomorrow and just take it shot by shot, hole by hole, like I’ve been doing.”said Reed.

Neither Reed nor Leishman have tasted Major success before and have a host of Major champions in their rear view mirror. Lurking at 4 under are Jordan Spieth and Rory McIlroy, who have seven majors between them with Henrik Stenson, a stroke better at 5 under; Dustin Johnson and Justin Thomas a couple more back at 3 under with Justin Rose and Bubba Watson at -2.

At the tail end of the field four-time Masters winner Tiger Woods made the cut but defending champion Sergio Garcia is heading home.

“Now I know I’m on the weekend. Even though I’m a lot behind, if I play a special weekend, shoot two rounds in the mid 60s, you never know.”

The weather is set to turn here in Augusta for moving day so there is sure to be plenty of drama and some plot twists. After firing 9 birdies in his second round Reed will sleep on a two shot overnight lead but the question is can he sustain this form as a front runner?