McIlroy only three off the pace after solid opener at Augusta 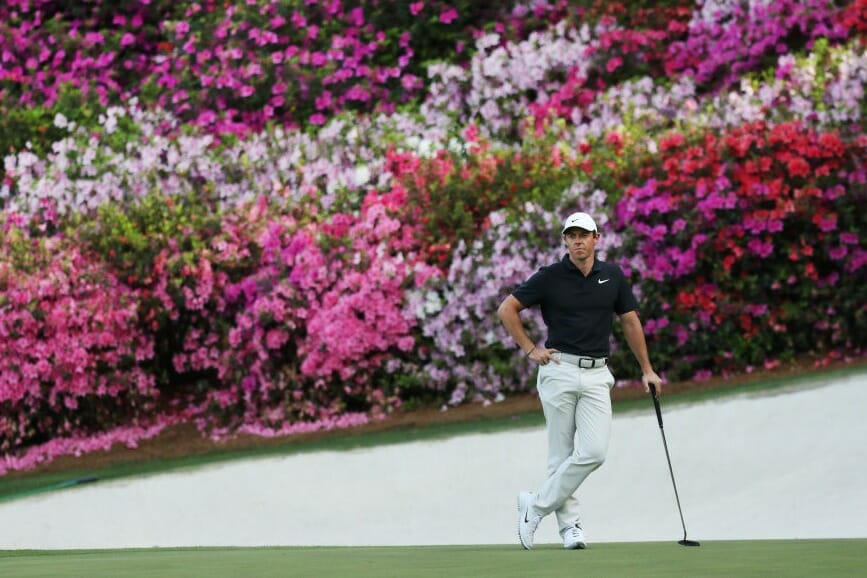 Rory McIlroy produced a grandstand finish to his opening round shooting a 69 on day one at Augusta National.

The effort handed McIlroy a share of fourth place and kept him sitting comfortably just three off the lead after the opening round of the year’s first Major.

Former Masters champion, Jordan Spieth has shown immediately he will be a real force in producing a 66 to lead by two shots from fellow Tony Finau who 24-hours previously was facing the possibility of having to withdraw after a bizarre ankle injury when he overdid his hole-in-one celebration during Wednesday’s Par-3 Contest. Finau, 28 had fans cringing when he proceeded to relocate his dislocated left ankle. He sought an x-ray of his ankle that proved negative to any break.

Finau, who is contesting a first Masters, then went onto Twitter on Thurday morning saying:  “Crazy day. Thanks for thoughts of concern, messages and prayers from all. I’m optimistic.”

Matt Kuchar, the runner-up in last year’s Open Championship, is also at four-under par with the 2016 Open winner, Henrik Stenson tied with McIlroy on three-under.

While McIlroy looked delighted with his effort it was a round that easily could have been a 66 or a 65 given the number of lip-outs he had for birdie.Indeed, McIlroy’s lowest Augusta score remains a 65 he shot on day one in 2011 but only to implode over the final day.

But then the golfer of seven years ago has gone onto to capture four-Majors and 18 other tour victories including his recent victory romp in capturing the Arnold Palmer Invitational. And in stark contrast to the youthfulness and Augusta National inexperience of leading the 2011 Masters into the final day, it was a very outwardly calm and methodical McIlroy striding the fairways of Augusta National.

McIlroy was out in the third last group avoiding the chill that greeted those out earlier in the day and got his much-anticipated Grand Slam quest underway with a dream start, draining a 19-foot birdie putt. He proceeded to par holes two to six before he missed a six-footer for par at the par-4 seventh.

However, McIlroy got back into the red with a four-foot birdie at the par-5 eighth hole only to then par his next four holes, including long par-4 11th and the first of the three ‘Amen Corner’ holes where his birdie putt lipped-out.

He walked off with a two-putt par from off the back of the green at the famed 12th hole and then crushed a 325-yard drive at ‘Azalae, the par-5 13th only to find a left greenside bunker where he got up-and-down for a third birdie of his round,

At the par-4 11th McIlroy again lipped-out for birdie, and this time a 30-footer.

McIlroy went to two-under for a first time in his round, and what could have been three-under par, when his eagle putt from the back of the green at the par-5 13th pulled-up 18 inches shy of the hole. He then pared the par-3 16th.

McIlroy saved the only real drama in his round for the 18th, ending his approach shot way left and into the fifth row of the patrons calmly seated around the final green, and then standing his ground for some seconds wondering what went wrong.

But then McIlroy need not have worried, after security have asked for patrons to move, he was given a warm ovation in delicately landing his chip shot to two feet for an easy par.

“I made one mistake, the bogey on 7.  But apart from that, I missed a couple of birdie chances early on, and I just told myself to stay patient out there.  I think anything around 60 out there is a pretty good score,” he said.

“The thing is it was a much different golf course today than what we’ve seen in practice.  And the SubAir must have been running nearly all night last night.  That’s Augusta.  That’s what we sign up to whenever we come here.”

“You know it’s going to be firm and fast.  And even talking to Harry (Diamond – caddy) out there, we played 54 holes Wednesday, Thursday last week, so just a week ago.  And he said this place is at least five or six shots tougher today than it was when we played.  Five shots, anyway.”

And when asked to single out the highlight of his round, McIlroy choosing his closing three pars.

“Probably those last three holes as it’s not always the birdies that stick out in your mind,” he said. “That downhill left‑to‑right that I had on 17 was nice to see that go in.  But I drove it well.”

“Everything was really solid.  And if I can continue to play like that over the next three days I’ll be pretty close.”

A solid start was what McIlroy had lacked over the past 4 Masters but going into day 2 he is right where he wants to be.