The Irish duo of Paul Dunne and Shane Lowry could find themselves fighting it out for the last Masters invitation heading into the weekend rounds of the Houston Open.

Dunne secured a PGA Tour career first in being officially credited with the first-round lead when he returned to play four holes of his delayed first round to post an eight-under par 64 to lead the $7m event by a shot which wasfirst time an Irish golfer has led on day one since the inaugural Houston event in 1946.

However, at the end of the second round Dunne’s 71 saw him in a fiveway share of sixth place on 9-under par, trailing just two shots behind American Bean Hossler who added a 68 to his opening 65 to lead by a shot on 11-under par.

Dunne had been awake at 4.45am local time Friday in preparation for a 7.20am restart to his unfinished first round and then had less than 30-minutes before heading into his second round.

But his fireworks on day one on the rain-softened course dried-up with Dunne managing just three birdies but also two bogeys.

“The course played a lot different heading into my second round as the wind picked up but then to shoot a 64 and to officially lead a PGA Tour is something I haven’t done before,” he said.

“The good thing is I am driving the ball well and this is after not playing all that well about three to four weeks ago but I did some good work in the fortnight leading into last week competing in the Dominican Republic.”

“So, everything is in good place with nothing being spectacular.”

Lowry had managed to complete his first round on Thursday and ended with three straight birdies in his 68 and then produced the same score on day two, managing five birdies and just the one bogey.

It is the first time in three Houston appearances Lowry’s had lift-off to make the weekend cut. And Lowry, just like Dunne, was not about to be thinking of taking the special charter flight late on Sunday night direct to Augusta National.

“I have my flight booked home to Ireland next Friday week,” he said. “So, if I have to change my travel plans then it is a good problem to have.”

Indeed, it is understood Lowry and his wife, Wendy are attending a wedding with Wendy to be a bridesmaid. 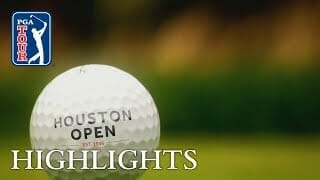