McGovern into the red on Senior Tour season debut 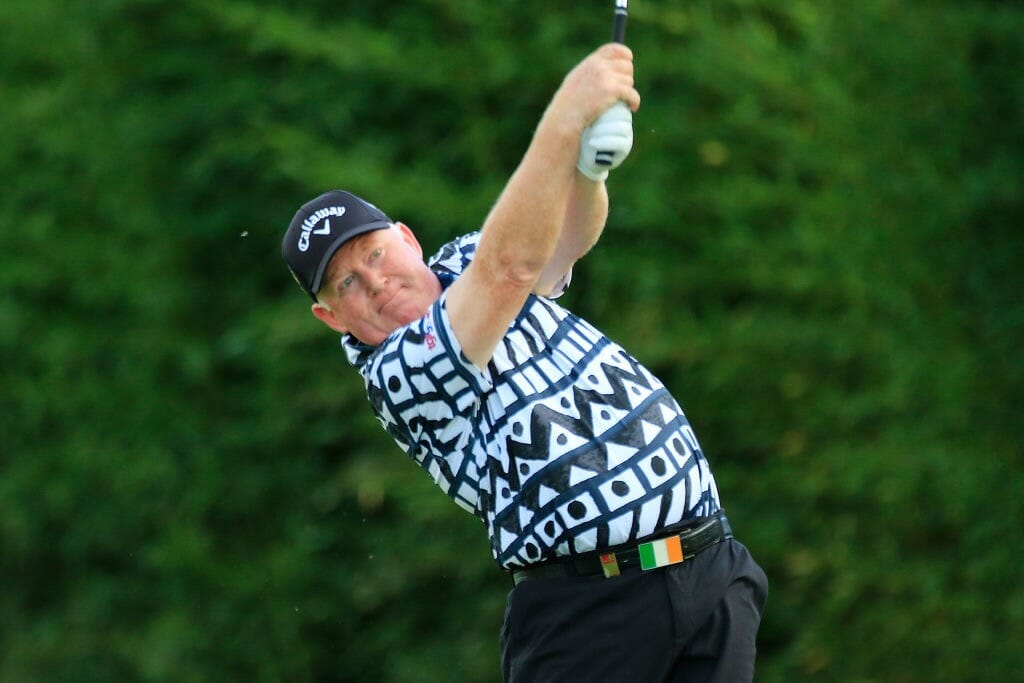 Brendan McGovern continued to shine brightest from an Irish perspective as he moved up into a share of 11th place at the Sharjah Senior Golf Masters presented by Sharjah Investment and Development Authority (Shurooq), the first event of the Senior year.

The Headfort professional, who earned his card by finishing in 20th place in the Order of Merit last season, added a two-under-par 70 to his open effort of 72 as he eases his way in nicely to life on the Staysure Tour.

Indeed he looks comfortable in his new surroundings and fired three birdies today with just the one dropped shot to post an admirable 36-hole total.

1989 European Tour Number One Ronan Rafferty is five shots further back after added a level par 72 to his disappointing opening round of 75 yesterday to claim a share of 29th.

The news wasn’t so good for Ryder Cup heroes Des Smyth and Phillip Walton however as they continued to struggle on day two. Walton sits on plus seven for the tournament after a 75 today while Smyth endured a day to forget, now 4th from last on plus eleven.

Australia’s Peter Fowler carded a new course record of 64, eight under par, at Sharjah Golf & Shooting Club as he moved to within two strokes of co-leaders Clark Dennis and Thaworn Wiratchant after the second round in the UAE.

Wiratchant, winner of the last event on the Staysure Tour, the 2017 season-ending MCB Tour Championship, signed for what was a course-record equalling round of 65 to take the lead in the United Arab Emirates after the morning session concluded.

Dennis, the overnight leader after the first round, joined Wiratchant on 11 under par, but it was Fowler who stole the show, carding six birdies and an eagle to claim a new course record and sole possession of third place on nine under par.

“I really like it here,” said Fowler. “I enjoyed it last year and was looking forward to coming back. The weather is fantastic. Yesterday it was a bit cooler, and the ball didn’t go as far as it did in the heat this afternoon – it was tough to make the adjustments with the irons.

“I was a long way behind after some good scores this morning, and Clark was pretty hot as well. I had to put something good together today, which I did, so I’m looking forward to tomorrow.”

Winner of the John Jacobs Trophy for topping the Staysure Tour Order of Merit in 2017, Dennis recovered from a bogey on the first with birdies on the third, fourth and sixth holes, but bogeyed the ninth to make the turn just one under par.

The American then made further gains on the 13th, 15th and 17th holes, settling for a second round score of four under par.

“I played some good golf again today, but it was definitely more of a struggle than yesterday,” he said. “I didn’t quite have my ‘A’ game, but I still manage to hit some good shots on the back nine, which gave me a couple of birdies, so I’m really glad that I got to 11 under par heading into the final day.”

“Even though we have played this course a few times, there is still a real challenge. The greens are fiery and firm so you have to be careful on every single hole.”
Wiratchant, who romped to victory at the MCB Tour Championship in December, setting a record-low 54-hole total on the Staysure Tour of 23 under par. The Thai admitted he feels at home in the heat of United Arab Emirates as temperatures reached 32 degrees.

“The weather is the same as I’m used to in Thailand, and the golf course is in great condition,” said Wiratchant. “I didn’t expect anything going into this event but, now I’m in this position, I want to go on and win.”

Players will negotiate two loops of the nine-hole Peter Harradine-designed course at Sharjah Golf & Shooting Club on Saturday, with pins changing location for the back nine configuration.