Neuro Putting – Why a COOL brain is so important

Brendan McGovern kicked off his Staysure season with a rock solid opening round of 72 at the Sharjah Senior Golf Masters presented by Sharjah Investment and Development Authority (Shurooq), the first event of the year.

The Headfort professional capped a wonderful year in 2017 in fine fashion with a two under par 70 when it mattered most at the season ending MCB Tour Championshp. The result meant Brendan finished the season in 20th place in the Order of Merit, securing his Staysure Tour card for this year.
And he looks determined to take full advantage as he mixed a birdie and a bogey with sixteen pars to take a share of 15th spot after day one in the UAE.
His even par effort leads the Irish challenge after a mixed day of scoring in the desert. 1989 European Tour Number One Ronan Rafferty is three shots further back after a disappointing opening round of 75 that included a damaging triple-bogey 7 left him in a tie for 38th.
While Ryder Cup heroes Des Smyth and Phillip Walton both returned four-over-par 76s to share a tie for 44th in the clubhouse.
If anyone needed a reminder of the standards set on this tour, Clark Dennis provided it by laying down a marker for the 2018 season as he fired a course record-equalling 65, seven under par, to take a three-stroke lead after the first round at Sharjah Golf & Shooting Club.
The 52-year-old finished first on the Staysure Tour Order of Merit in 2017, becoming the first American to win the John Jacobs Trophy, and continued the form which saw him end last year as Number One of the European over-50s circuit.

Dennis birdied the third and fourth holes, and then birdied the sixth hole to make the turn in three-under-par. On the back nine, he made four consecutive gains from the 12th to the 15th holes to move clear of the chasing pack.
“It was a pretty stress-free round,” said Dennis. “I hit a lot of good shots and I could have been a few strokes lower. It was a really good day.
“The conditions were perfect for golf, there wasn’t a breath of wind as we played the front nine. The greens are perfect, and the course is in phenomenal condition.” 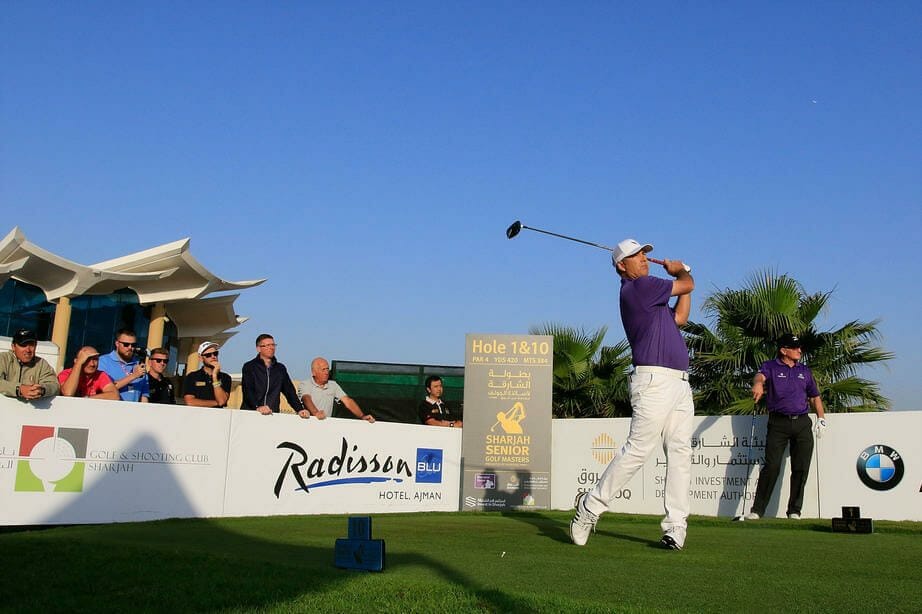 “I was in the first group out, and I was honoured to be given the opportunity to hit the first shot of the new Staysure Tour.”
Dennis is three strokes ahead of two-time Staysure Tour winner Marc Farry, four-time winner Phil Golding, and Thailand’s Thaworn Wiratchant, who won the 2017 season-ending MCB Tour Championship with a record score of 23 under par – the trio carded first rounds of 68, four under par.
“I’m very, very happy with the round,” said Farry. “I’ve been working on my short game, especially on my putting over the last few weeks in America. The greens here are a similar speed and surface to what I’ve been practising on in Florida.
“I’ve struggled the last three or four years and have been working hard on my technique, finding a better takeaway and better balance in my swing; maybe it’s starting to pay off, you never know with this game.”
In a share of fifth place on three under par are former Ryder Cup player Peter Baker, and two-time European Tour winner James Kingston. Baker is playing his first full season on the Staysure Tour after turning 50 towards the end of last year.
“It’s great coming back to the UAE,” said Baker. “I’ve always enjoyed coming here; the conditions are great to play in and you feel as though you want to make the most of them and play well.
“I’ve enjoyed playing on the course. The tees are different enough to make the hole different each time. It’s a good test of golf and you really have to be on your game.”
As in 2017, the Sharjah Senior Golf Masters is being played on the Peter Harradine-designed nine-hole layout, with different sets of tees used for the front and back nines of the round.