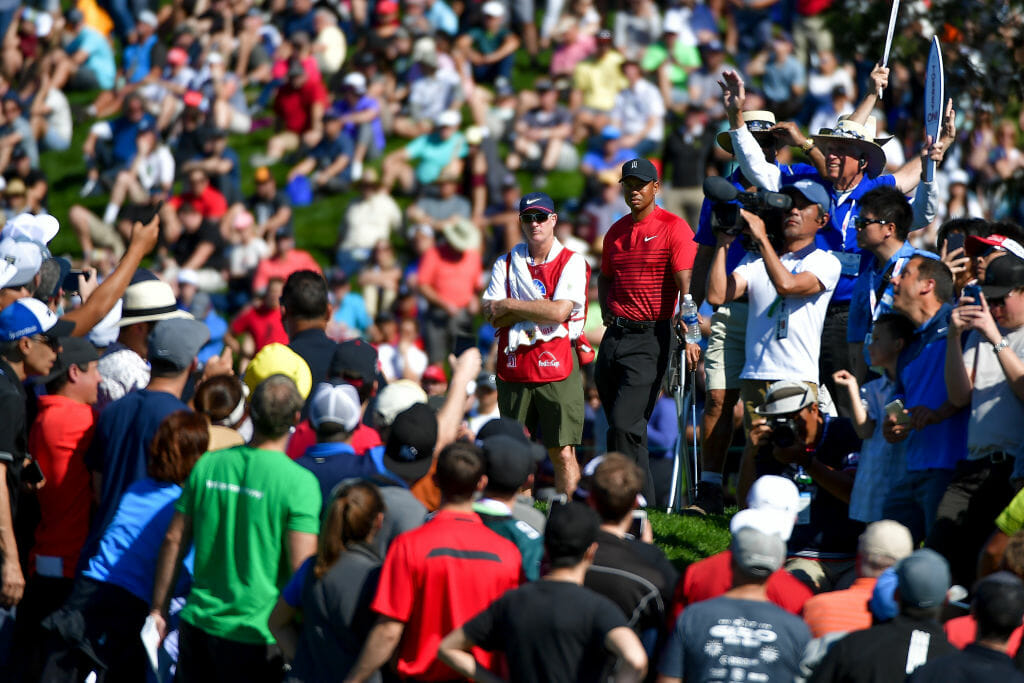 And McIlroy himself admits he’s also put off so much by such comments he could easily take a couple of headache tablets to deal with the behaviour.
McIlroy was commenting after adding a two-under par 69 to his opening 71 and be assured of playing all four rounds of the Genesis Open on the Riviera course in suburban L.A.

In contrast, Woods struggled in signing for a five-over par 76 and miss the expected cut by four shots.
A newer and much-younger version of ‘Tiger-mania’ was evident a few weeks ago when Woods officially returned to full-time competition at the Farmers Insurance Open, and so many out on the Torrey Pines course had not been born when Woods dominated world golf in the late 90s early 2000s.
And this 2018 edition of ‘Tiger-mania’ has been present at the Genesis.

Of course, Woods has had to deal with the commotion, the disturbances and the hecklers all his career but then he was asked after his round whether such behaviour had ever cost his shots in competition.
“It’s cost me a lot of shots over the years, um-hmm. It’s cost me a few tournaments here and there,” he said.
“It’s been a lot because all it takes is one shot on a Thursday that you lose a tournament by a shot on Sunday. What people don’t realize, it’s not just something that happens on Sunday afternoon, this is cumulative and it’s par for the course.”

McIlroy, who switched putters overnight and went back the club that earned him a second and third earlier this year in the European Tour’s ‘Desert Swing’, was asked his reaction to the manners of a few who seem to ruin it for so many genuine golf fans.

“I don’t know, it might have been like this like the whole Tigermania and these dudes, but I swear, playing in front of all that, Tiger gives up half a shot a day on the field,” McIlroy said.
“Like it’s two shots a tournament he has to give to the field because of all that that goes on around. Hopefully this calms down the more he plays and it doesn’t become such a novelty that he’s back out playing again because it’s — it’s tiring, I’ve got a headache after all that.

“It’s just the whole thing. Guys, you’ve got a six-foot putt, “It doesn’t break as much as you think,” just stuff like this that they don’t have to shout”
“You know, whoever that’s teeing off at 8:30 in the morning doesn’t get that and can just go about his business and just do his thing.
“So, that’s tough and Tiger has had to deal with that every single time he goes out to play.”