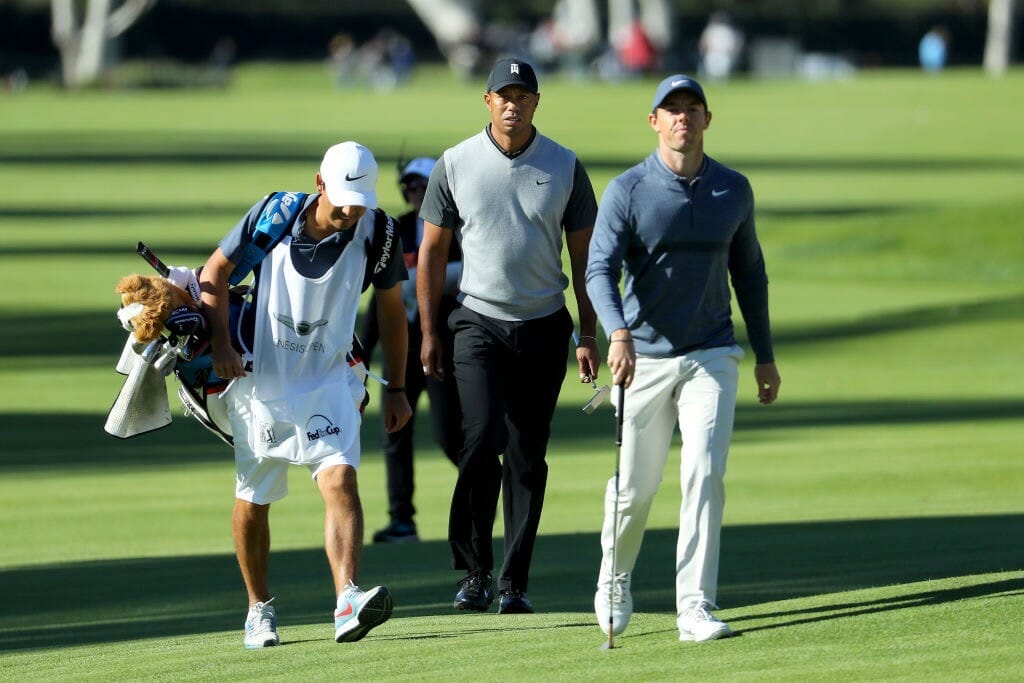 Rory McIlroy and Tiger Woods combined to deliver a golf bag full of mixed emotions on the opening day of the Genesis Open at the Riviera Club in suburban LA.

While McIlroy capped his round with an eagle ‘3’ to kick-start his back nine it was yet another bitterly frustrating day with the putter in signing for an even par 71.

Woods was one shot further back after posting a 72 and McIlroy is now four up on Woods in the last four rounds they have contested alongside each other.

McIlroy seemed in trouble from the outset in finding a greenside bunker at his first hole, the par-3 10th, but then to his clear surprise holed
the shot for a birdie.

Woods followed the World No 10 into the hole also with a birdie before the 14-time Major winner lost his 11th hole tee shot right in one of the towering gum trees lining the Riviera fairways.

There were suggestions a spectator may have pocketed Woods’ ball but given the sizeable following it seemed unlikely, and with Woods taken back to the tee to play a third shot en route to a double-bogey ‘6’.

But while Woods struggled with the driver, McIlroy’s putting woes, that saw him average 30.5 putts per round last week at Pebble Beach, continued with back-to-back bogeys at his second and third holes.

In contrast, Woods was still a crowd favourite having picked-up a third birdie on 15 but there was the call of ‘C’mon big cat, get it together’ when Woods found a greenside bunker on 16.

Finally, McIlroy gave his fans something to cheer about and in the process produced a first fist pump in the States this New Year in holing a curling 28-footer for an eagle ‘3’.

McIlroy then ended with eight straight pars in his level par tally.  “I struggled early on in bogeying the two par 5s on the back nine, which usually is my bread and butter,” he said.

“But it was a nice eagle at the first and I played much better on our second nine, gave myself some chances. I didn’t convert any, but sort of happy that I hung in there.”

As mentioned, McIlroy’s new season Achilles Heel is his putting and said, “I hit so many good putts that just slid by the hole,” he said.
“It’s not as though I am hitting them wide. I’m not missing the hole by a few inches, it’s sort of just sliding by the edges. So it is not far off.”

And Woods, who grabbed five of the six birdies between the duo, was happy with the ruling handed him at the 11th hole following his errant drive.

“When I got to the tree there were a lot of spectators pointing to the ball, so there was no concern with anyone taking it,” he said.
“But then given it was so high up there was no way I could say it was mine or not.”

The American duo of Patrick Cantlay and Tony Finau head the field at five-under par.