Tiger Woods returns to competition hosting this week’s Genesis Open and is drawn to play the opening two rounds on the famed Riviera Country Club course alongside Rory McIlroy and Justin Thomas.

It will be the first time Woods and McIlroy have been grouped together since the 2015 Masters when they played the final round at Augusta National.

In fact, Woods and McIlroy have played beside each other in six PGA Tour events since the opening two rounds of the 2012 Barclays Championship and, all up, they have been together for 11 rounds in those six events.

Of course, Woods and McIlroy strengthened their relationship going head-to-head on a few occasions in China.

“He’s just a great kid, he really is. He’s got a heart of gold,” said Woods. “His dad’s fantastic too and his mom’s wonderful, so it’s just a great family.”

“I’ve loved playing with Rory over the years. We haven’t played, unfortunately, as much as we would like. A lot of that’s me because I got hurt and didn’t play, but he’s obviously gotten a lot better, he’s worked on his game, he’s won tournaments while I’ve been out. Yeah, Rory’s always been fun to play with, will continue to be, and he’s one of the players, when he gets it going, there’s really not a whole lot of guys better than him.”

And when asked by this journalist if he relishes the chance to go head-to-head with McIlroy in a final round, Woods responded:  “I’d love it, that’s something we pray to have happen.”

“I think in Chicago one year we were a little off the pace. At Augusta we were paired together not too long ago, but again, we were just off the pace a little bit. Maybe we can both play well and peak at the right time.” 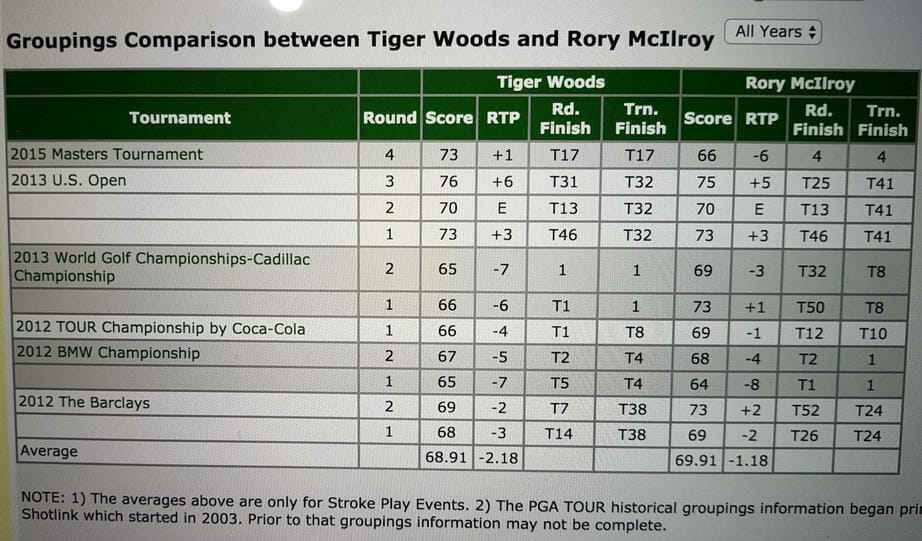