McIlroy produces a horror show with the putter with 38 blows

Rory McIlroy produced a horror show on the greens of Monterey Peninsula which included posting a ‘five-putt’ double-bogey followed by two late three-putt bogeys on day two of the AT&T Pebble Beach Pro-Am.

McIlroy was well-placed in coming to the short 349-yard par-5 fifth he was playing as his 14th hole on the Monterey Peninsula Country Club course and the easiest of the three courses hosting the $ 7.4m event.

The four-time Major winner used his putter from just off the green and while credited with four putts on the green, it was five putts with his putter in an unwanted first double of his season.

McIlroy was just short of the green with his drive and attempted a very long putt from the fringe, almost hitting the flagstick with his eagle putt but with the ball coming to rest some six feet past the hole.
McIlroy’s third putt missed the cut to the right and he also missed for par and then failed to sink his bogey putt before finally tapping-in for his ‘6’.
To compound his putting woes, McIlroy three-putted his 16th and 17th holes before signing for a three-over par 74 to drop back to one-under par.
McIlroy’s round included a total of 38 putts and now heads to a Saturday third round at Pebble Beach and where he previously missed the cut in the 2010 U.S. Open.

In contrast, playing partner Phil Mickelson handed McIlroy a lesson in how to play the ‘easier’ of the three courses, posting a round of 65.
McIlroy, and as he had done a day earlier, birdied his opening hole and where the scoring average is 69.55 compared to Spyglass Hill at 71.23 and Pebble Beach 71.30.
But McIlroy did not need to know that with bogeys at his third and sixth holes before getting back to level with a birdie at his seventh.
McIlroy and new caddy, Harry Diamond then broke out in smiles holing his 48th birdie of 2018 with the shot of his round and spinning his approach shot at his 10th to just three feet

But it was then a case of one step forward and two steps back as McIlroy followed up by doubling the his 14th before ending par, bogey, bogey and par.
Plenty of work to be done on Day 3 at Pebble Beach, especially on the greens. 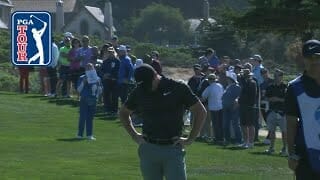