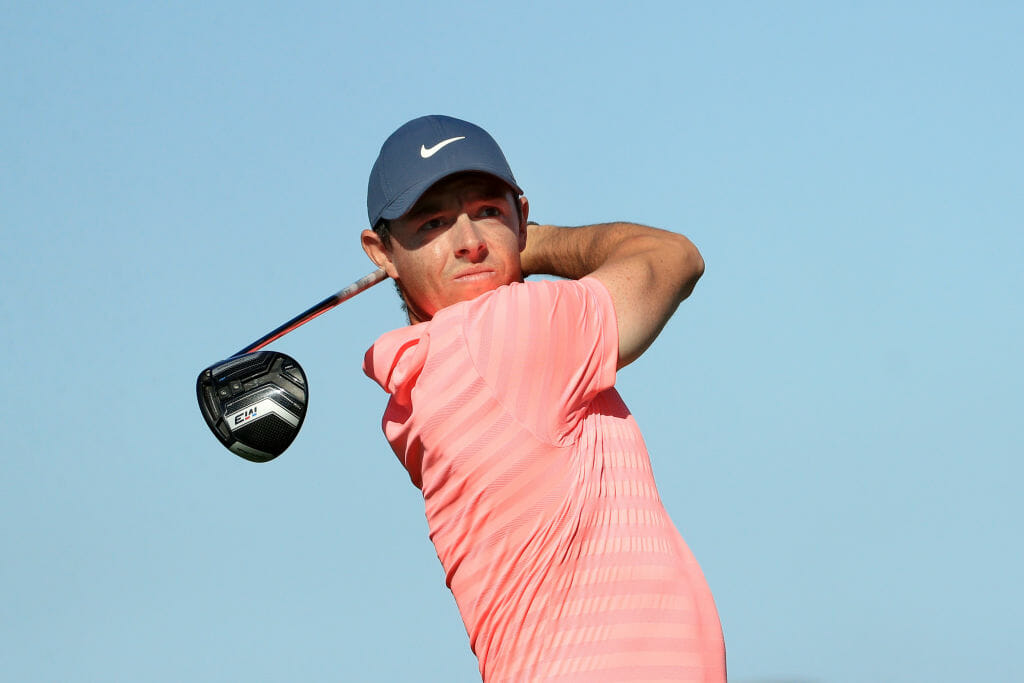 Rory McIlroy was clearly dialled-in bringing his ‘Middle East Swing’  form to the PGA Tour’s ‘West Coast Swing’ in posting a round of 68 on day one of the AT&T Pebble Beach Pro-Am.

McIlroy teed-up in the $ 7.4m event for a first occasion having averaged 67 for each of his eight rounds on the European Tour’s ‘Middle East Swing’.

And had it not been for a 16th hole bogey, McIlroy would have kept his average at 67 on the Pacific Ocean lined Spyglass Hill course

McIlroy started fast holing an eight-foot gem at the par-5 opening hole.
The current World No. 8 who was playing alongside Phil Mickelson dropped a shot at six but picked off birdies at seven and eight along with three inward birdies on the par-5 11th and 14th holes before a birdie at the last for his four-under total.

“I was happy with my round and anytime you can get it around Spyglass with a decent score you have to feel good as it is the tougher of the three courses,” he said.

“I recovered well from a couple of messy holes coming in and, in the end, I made a great bogey on 16, a great par on 17 and then it was nice to finish with a birdie.

“I’m scrambling well when I need to. I feel like I’ve made good strides with my putting over the off season. Driving the ball good. Everything — from when I spoke to you guys last until now, everything, I feel, has gotten better, which is a good thing.

“So, no, I feel really comfortable with it all.”
And after a third place in the Abu Dhabi HSBC Championship and the disappointment of runner-up last fortnight in Dubai, McIlroy is in a best position both golf-wise and health-wise since capturing his last career title – 2016 Tour Championship.

“Yeah, I feel good. A couple of really good weeks in the Middle East. But, yeah, like I’m healthy and I’m able to practice, I’m able to do everything I want to do, so I feel good,” he said.
“I’m in a really good frame of mind and that helps too.”

And after first contesting a first Alfred Dunhill Links in 2007 and being familiar with the pro and amateur partner format, McIlroy’s made a conscious decision in his maiden AT&T Pro-Am showing not to focus as much on the team format.

“I mean I’ve had this format so many times at the Dunhill where it feels a bit different,” said McIlroy.
“Sometimes I get too much carried away with the team aspect and not actually, this is a golf tournament and there’s a lot of World Ranking points at stake here and whatever.

“So, I sort of made a conscious effort this week to treat it as that and not warm up right next to him, not — actually get my, I don’t know, my game head on and just sort of try and go through the things that I need to do to play well.
“It worked today, I guess, so.” 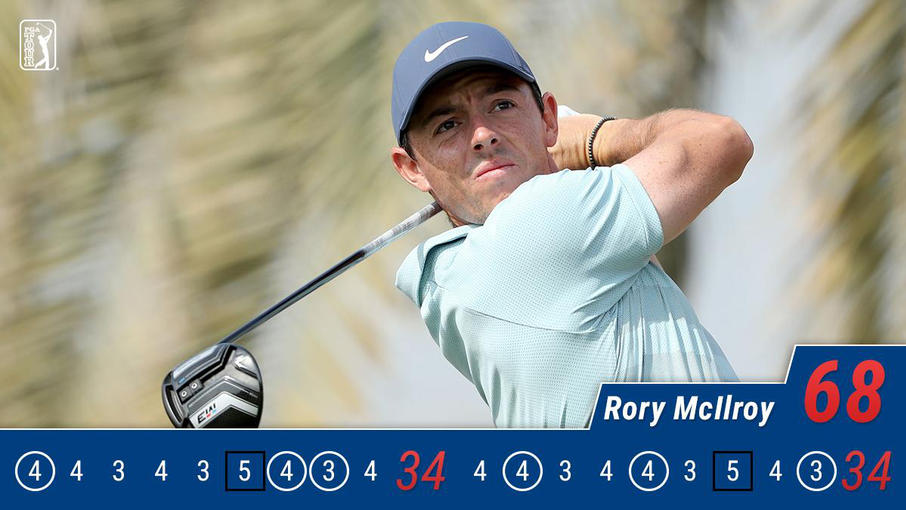 Phil Mickelson, who played alongside McIlroy, signed for a round of 69 and was asked his thoughts of playing alongside his likely 2018 Ryder Cup rival
“Rory played good, solid golf. He shot a nice opening round and he’s fun to be around,” said Mickelson.
“I really enjoy Rory and his dad and we had a good time.”

Of the strong five-man Irish contingent, Shane Lowry ended day one with the same four under-par score as McIlroy, rebounding from last week’s poor Phoenix Open result to sign for a 67 at Monterrey Peninsula.

Graeme McDowell returning the venue of his 2010 U.S. Open triumph clearly warmed to the surrounds to be bogey-free and lying at three-under par playing the downhill par-3 17th hole.
However, ‘G Mac’ sent his tee shot into a back bunker and then failed to get onto the green with his second.
McDowell then agonised in bending over and leaning on his putter when he missed a 10-footer for bogey in taking a double bogey ‘5’.

He then produced a 266-yard drive down the last and then found the long fairway bunker short of the green and failed to get up[ and down for a birdie as he carded a round of 71.
“ I took the gloss from what looked to be a pretty decent start with the double on 17 and not getting a birdie up the last.”

And Paul Dunne joined McIlroy at Spyglass Hill but it was a roller-coaster, outward nine of three birdies and just as many bogeys.
To his credit, the Greystones golfer then birdied two of his closing five holes in a one-under par 71.