Paul McGinley named as next DDF Irish Open Host for 2019 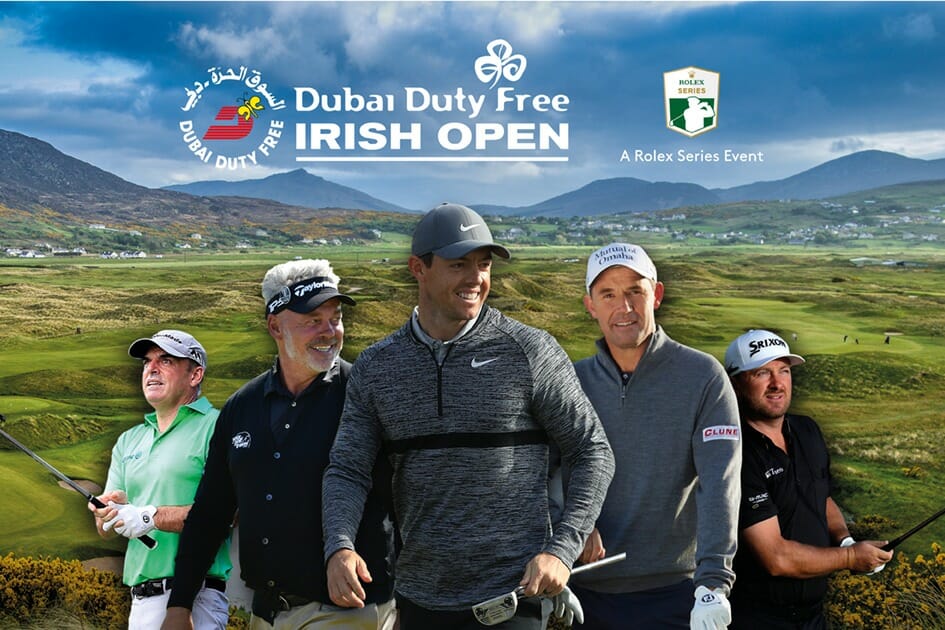 A new and exciting era for the Dubai Duty Free Irish Open was unveiled today with news that the tournament, from 2019 onwards, will be hosted annually by some of the greats of the Irish game.

Utilising the model that has seen the British Masters return successfully to the European Tour International Schedule in recent years, the new era will begin with Paul McGinley assuming the hosting role in 2019.
Alongside the 2014 Ryder Cup Captain in the hosting ‘pool’ for future years are Ireland’s four Major Champions; Darren Clarke, Padraig Harrington, Graeme McDowell and Rory McIlroy, whose Foundation has hosted the tournament since 2015.
The Rory Foundation will continue as host for this year’s Dubai Duty Free Irish Open at Ballyliffin Golf Club in County Donegal from July 5-8, where the tournament will once again feature as part of the Rolex Series on the European Tour.

The precise future rotation of players and years will be revealed in due course, along with the venue for 2019.
Keith Pelley, Chief Executive of the European Tour, said: “Today’s announcement is yet another exciting development in the history of one of our great tournaments.

“Ireland has been blessed with many legendary golfers over the years and to have five of them agree to host the country’s national Open over the next five years shows a terrific commitment both to their homeland and to the European Tour.
“I cannot use the word commitment without paying special thanks to Rory McIlroy, who has worked tirelessly alongside our fantastic tournament sponsor Dubai Duty Free over the past four years to raise the tournament to an entirely new level, and I am delighted he will return to the role of host in a future year.”

2016 Champion and current host Rory McIlroy said: “I am thrilled by what we have achieved with the Dubai Duty Free Irish Open over the past four years. I would like to thank the European Tour for sharing my vision for the event. Now feels like the right time to rotate the tournament hosting process, using the model that has been so successful for the British Masters. I look forward to collectively building on the current platform in the years ahead.”

Colm McLoughlin, Executive Vice Chairman and CEO of Dubai Duty Free, said: “I would like to thank Rory and his Foundation for hosting the Dubai Duty Free Irish Open since 2015. Rory’s involvement in the tournament was a key factor in our decision to become the title sponsor at that time.
“We have enjoyed working with the European Tour and seeing the tournament grow dramatically in such a short space of time, with it now part of the Rolex Series. We are happy with the plans to rotate the hosting of the tournament from 2019 onwards and delighted that Paul McGinley will be the first to take on that role.”
Paul McGinley said: “I am truly delighted to be part of this next exciting phase in the history of the Dubai Duty Free Irish Open.

“As Ireland moves to the forefront of the world golf schedule in July 2019, I look forward to hosting that year’s Irish Open and will endeavour to make it a memorable event for all players and the huge Irish support the tournament always enjoys.”
Darren Clarke said: “I’m absolutely delighted to have been asked to host the Irish Open and I’m looking forward to working with Colm McLoughlin and his team at Dubai Duty Free to continue the great work that Rory and the European Tour have done for the event over the last four years.
“Everyone has seen what a success the British Masters has become with Ian, Luke, Lee and Justin all hosting the event. I think it’s great that we have Rory, Graeme and myself from Northern Ireland and then Paul and Padraig from the South. There will be a natural rotation of the tournament around Ireland and I’m sure there will be a fair bit of competition between the lads to see who can put on the biggest and best tournament when we are the tournament host!

“For me, the Dubai Duty Free Irish Open should have a real festival atmosphere. Our fans are some of the best in the world and one of my main goals of hosting the Irish Open will be to make sure everyone – from the players and their families to the fans, to the caddies, the volunteers, marshals and officials – has an unforgettable week.”
Padraig Harrington said: “The Irish fans are some of the best in the world and I know for all of the Irish players on Tour, there is no better feeling than playing in front of our home fans in our national open. The Irish Open has been an important part of my schedule my whole career and I have always enjoyed playing an active role in helping to make sure it is a success and one of the leading events on the European Tour.

“I look forward to taking my turn hosting the Dubai Duty Free Irish Open to benefit the Padraig Harrington Charitable Foundation, which provides financial assistance to deserving beneficiaries throughout Ireland and the rest of the world, and also to supporting Rory, Graeme, Darren and Paul when they take their turn at the helm.”
Graeme McDowell said: “I think the first thing we need to mention is the tremendous job that Rory and his Foundation have done, in partnership with Dubai Duty Free and the European Tour, to really put the Irish Open back on the world stage. We all know what Rory McIlroy brings to a golf tournament, and the extra effort he has put into the Dubai Duty Free Irish Open over the past four years has been phenomenal.

“It’s now up to myself, Darren, Paul and Padraig to join Rory as tournament hosts of our national Open and what an honour that is going to be for all of us. You just have to look at the British Masters over the last three years to know that the ‘tournament host’ model can be hugely successful, and I am sure we will all have our own ideas how to keep growing the Irish Open and giving Irish golf fans a tournament to be proud of.
“On a personal level, I am obviously delighted that I can help my own Foundation by hosting the Irish Open. The G-Mac Foundation’s main goal is to support children’s medical research across Ireland and the United States, and the Irish Open will help raise essential funds to help kids on both sides of the Atlantic.”
Tickets for the 2018 Dubai Duty Free Irish Open at Ballyliffin Golf Club are currently on sale. To take advantage of a full range of prices and ticketing options, please visit: http://et.golf/DDFIO2018