Rory McIlroy heads up the road to Dubai pleased with his return to competition despite finishing third in the Abu Dhabi HSBC Championship.

England’s Tommy Fleetwood retained his title and celebrated his recent 27th birthday in an impressive fashion posting an equal low final day 65 and win by two shots with a 22-under par tally.
It is Fleetwood’s fourth European Tour title and his first in regular tournament competition since being crowned European No. 1 late last year, and also comes after the birth of his son and his marriage earlier last month.
“This is the biggest thing for us after last year, I had had the year of my life by a long, long way on the course,” he said.
“And everything we’ve done, everything we’ve talked about, sort of that month off was to make sure that we kept progressing, kept improving.
“We sort of really wanted to look at the year like, you know, if Justin Rose had shot level par on that back nine on Sunday in final of the Race to Dubai, then I wouldn’t have won the Race to Dubai.”

McIlroy had helped celebrate Fleetwood’s birthay on Friday but handing him a chocolate birthday cake with three lit candles but it was the long-haired Englishman further celebrating in banking a HSBC sponsor’s cheque for Euro 408,600.
Former Irish Open winner, Ross Fisher boosted his claims for a return to the European Ryder Cup team in signing for a 69 to be second on 20-unde par.
McIlroy was next on 18-under par and tied third with Matthew Fitzpatrick who posted a last day 69.
The four-time Major winning McIlroy went into the final round just one shot off the lead and got the start he wanted with two birdies in his opening four holes but stalled over the next dozen holes with a bogey at six and just the one birdie at the eighth hole.
He then bogeyed the 17th and for a second day running birdied the last.
McIlroy’s third place result continues a run of near misses in the UAE capital but with the Northern Irishman delighted with his form over the four rounds and in his first event in some three months.
“I’m really happy with how I played. It could have been a little bit better today,” he said.
“I was a little bit scrappy but the conditions sort of, I felt like shooting anything in the 60s would have been a good score. I didn’t quite do that; I shot 70. Overall, I’m really happy how I played this week. 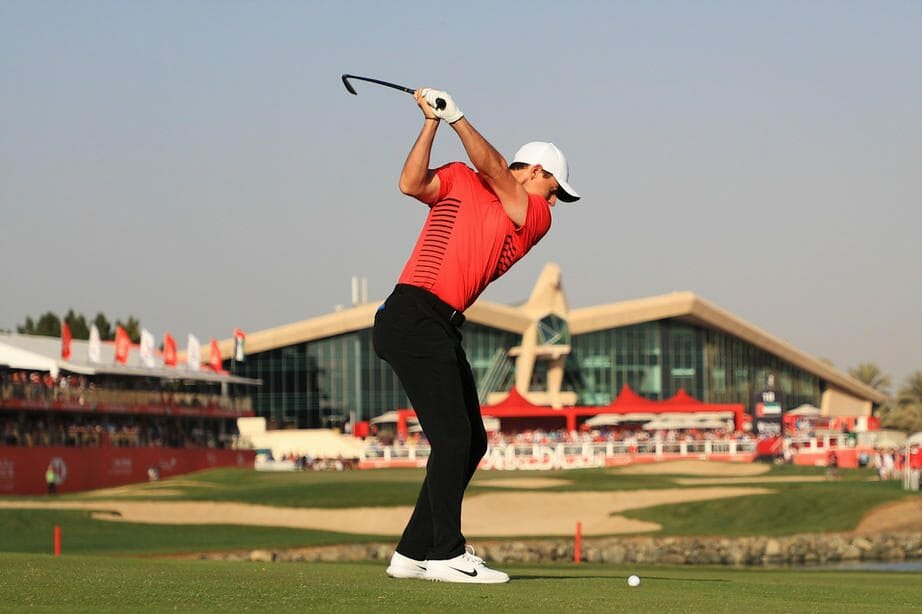 “My game is in really good shape and I saw some really, really positive signs.
“So, I’m looking forward to next week in Dubai and obviously looking forward to the rest of the season.
And when asked what pleased him most, McIlroy responded:  “I think my attitude, my patience, my comfort level of being back in the environment.
“I didn’t really know — I know it’s only three months, but things change and I felt like maybe I needed a couple of weeks to get back into the thought process that you need to get into for competitive golf and scenarios and this and that.
“But I felt like I got into that pretty quickly this week, so that was probably the most pleasing thing.”
McIlroy will tee-up in Dubai with strong memories of not one win, and his first as a professional in 2009, but having won on the famed Majlis course three years ago.
“Dubai is a golf course I know very well,” he said.
“As I said, my game is in good shape. So’ I have to doubt if I can play the same way I played this week, I’ll have a good chance again next week.
“It’s just a matter of dust myself off and sort of looking back on this week, I think it’s been a huge success for me, even though I didn’t win today.
“I felt like I got a lot out of it, and yeah, I’m excited to get back at it again next week.”
Paul Dunne’s quest for a second victory nose-dived with the Greystones man having to wait to his final hole for his only birdie in a disappointing last day 74 that handed him a share of 19th place at 11-under par.