A dramatic final day to the DP World Tour Championship in Dubai is in store with Paul Dunne and Shane Lowry well placed for a Sunday attack and the Race to Dubai set for a grandstand finish at Jumeirah Golf Estates.

Dunne carded a bogey free 67 on moving day in Dubai to sit in a tie for 7th just three shots off the lead. Despite a slow start where Dunne didn’t manage his first birdie until the 7th hole, the Greystones man was very happy with his finish which leaves him lurking just off the lead.

Speaking to Denis Kirwan after his round, Dunne said: “I am happy with five under today but didn’t feel like I gained any ground at all.
“I thought the scoring was pretty insane out there today. They moved a few tees up making the par 5s reachable and the 15th drivable so scoring was very low.
“I played pretty solid and struck the ball well today, not quite as good as I feel I did yesterday but my putting was good. Hopefully I can hit it like I did yesterday and putt like I did today and that would be perfect for tomorrow.”

Dunne knows a big finish will put him in a position to cap off a remarkable season with a chance to claim his second European Tour title.
“I gave myself a lot of chances today and it was great to finish strong and pick up three birdies in the last four and gain some momentum going into tomorrow. I know I need to shoot a good score, one or two under wont gain any ground on the leaders. The key is to get off to a fast start, build on it and push to see where that takes me.”

Unlike Dunne, Shane Lowry got off to the perfect start this morning. He birdied the first two holes and added gains on his 9th , 12th and 14th to close to within one of the leaders at that stage.
Lowry parred 15 and 16 and was just where he wanted to be with the 17th and 18th being two holes the Offaly man would expect to pick up at least one more shot on, but it was not to be as he took a step backwards carding his only blemish on the par 3 17th while failing to birdie the last for the first time all week.
“I left plenty out there today, I gave myself so many chances and it was a disappointing way to finish,” Lowry admitted.
“The goal was to get it to double digits today and I had it to -10 for a while with two easy holes to play. The 17th was just a smooth 8 iron and I made bogey there. It was a really easy flag and an easy shot and then I made hard work of the last which is an easy enough par 5 too. 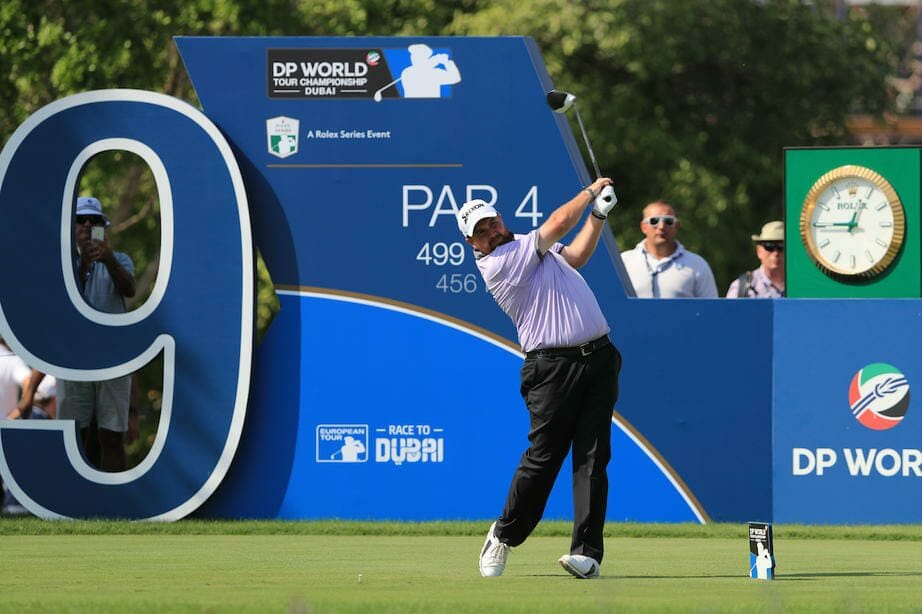 “I did hole a good 15 foot putt on the last for par though , it was one of those putts that I knew I needed to hole to give myself a bit of a chance going into tomorrow. If I missed it I would have been very angry and I probably wouldn’t be talking to you now,” he confessed with a chuckle.

“I will just go out tomorrow and shoot the best score I can and see what happens. I had the golf for a 63 of 64 out there today so if I can play like that tomorrow it would be a nice way to sign off the year.”

At the top of affairs, Justin Rose will take a one-shot lead into the final day ensuring the overall Race to Dubai will go right to the wire.
The Englishman has won his last two European Tour starts and entered the eighth Rolex Series event of the season knowing another victory would see him overtake countryman Tommy Fleetwood and be crowned Europe’s Number One for the second time.

He seized the initiative to top the projected Race to Dubai Rankings presented by Rolex after day one but a bogey on the last in his second round meant Fleetwood was back in the ascendancy heading into the weekend.
Fleetwood came home in 30 for a second consecutive round of 65 on Saturday to sit at 13 under but Rose matched him to be two shots better off and one ahead of Dylan Frittelli and Jon Rahm.

Thai Kiradech Aphibarnrat finished his round of 67 with five birdies to sit alongside Fleetwood at 13 under, with South African Dean Burmester also at that mark after a 65.
Should Rose finish solo second on Sunday, Fleetwood would have to win to claim the Harry Vardon Trophy, with a host of permutations in play as long as Rose finishes in the top five.
“I know what I need to do to stay at the top of the leaderboard,” said Rose. “But if I slip up tomorrow, he’s right there. He’s done everything he needs to do on his end, so it’s a lot of fun.
“An opportunity, that’s the way I’m going to look at it. Don’t see much pressure on myself tomorrow. This is going to be a day just to go for it really and play well.
“There’s going to be a lot of good players and it’s going to be a day where you have to play good golf.” 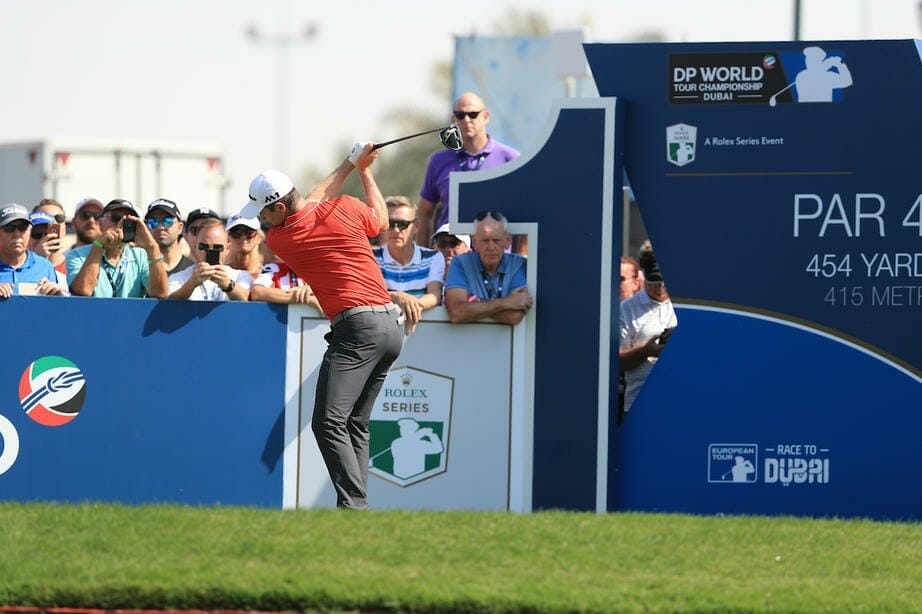 Fleetwood, meanwhile, had started moving his way back up the leaderboard with birdies on the eighth, ninth and tenth.
Frittelli joined the leading group with a birdie on the 14th and when he took advantage of the driveable par four 15th, he had the lead on his own.
Rose holed an 18-footer on the 12th but Frittelli hit back from similar range on the 17th and after Rose chipped in on the 13th, Frittelli took advantage of the last to sign for a brilliant bogey-free 63 and set the target at 14 under.
While Rose and Frittelli we doing battle at the top, Fleetwood was stalking them, making four birdies in a row from the 13th with the help of a monster putt on the 16th.

A 36-foot putt on the 16th put Rose on top on his own and Rahm birdied the same hole, with the Spaniard and Fleetwood both birdieing the last as Rose saved par despite finding the water.
“It’s massive, it really is,” said Fleetwood. “But above all, whether I win it or not or whether Justin wins it, one of us will have deserved it.
“It’s been an absolute pleasure trying to win a Race to Dubai, coming down these last few events and especially this week, now. The week could have gone not quite how you wanted it, not being in contention or anything. So last day of the season and I’ve got a chance to win the Race to Dubai, it’s cool.
“It’s the biggest thing I’ve ever tried to achieve. I was in contention in the US Open and Mexico but they were one or two rounds. This has been all year and you come down to the final event.
“A year-and-a-half ago I was absolutely nowhere in the game and I was a bit lost. Fast forward to here for me, it’s been amazing to play and to enjoy my golf this year. Then to get to this stage, it’s been an absolute pleasure and privilege trying to compete for a Race to Dubai.”

The stage is set for an epic finish tomorrow in Dubai.