Lowry and Harrington to go head-to-head for Turkish crown

Shane Lowry and Padraig Harrington started the week as always, playing a chipping competition for €50. (As of today, it stands 2-1 to Harrington) Tomorrow the stakes are slightly higher as they will fight it out in the last group of the Turkish Airlines Open for the €985,495 first place prize.

A moving day 65 for Lowry and a 64 for Harrington leaves Lowry tied for the lead on -14 with Kiradech Aphibarnrat, while Harrington lies two shots further back in a tie for third. And with Padraig the first of the twelve unders to return his card, it sees the Irish duo paired together in the final group tomorrow at Regnum Carya Golf & Spa Resort.

“Out with Paddy in the final group tomorrow so that will be interesting.” Said Lowry.  “I have actually never played with him in a final group before, he probably won’t talk to me (he laughed). Hopefully it’s the two of us coming down the stretch tomorrow, that would be nice.”

Lowry had started the day six shots off the halfway leader Nicolas Colsaerts who held a four-shot advantage overnight, but the Belgian carded a 73 on day three, leaving the door open for the rest of the field.

Both Lowry and Aphibarnrat will be going in search of their fourth European Tour titles while Lowry is also looking to break into the top-60 in the Race to Dubai Rankings presented by Rolex which would earn him a spot in the season-ending DP World Tour Championship at Dubai.

“I have dropped down the world rankings over the last while so it will be nice to earn a few points tomorrow and also a few Race to Dubai points and make sure I am playing there in a couple of weeks.” Said Lowry

On a low-scoring day in Turkey, Colsearts was not keeping pace with his challengers though as he turned in 32, his four-shot overnight cushion meant he was still able to extend his lead to five.

Lowry birdied the 11th to cut the gap to four before Colsaerts opened the door to the field as he put his second in the water on the same hole. That led to a double-bogey and with Lowry making it two birdies in a row and five for the day, he was just one behind.

Lowry had turned in 31 with a long putt on the second and tap-in birdies after brilliant iron play on the sixth and seventh.

A six-footer from Lowry on the 13th brought another birdie and from being five shots clear just two holes earlier, Colsaerts was caught. A three-putt bogey on the 12th then dropped the long-time leader to 13 under and Lowry was alone atop the leaderboard with 16 players within five shots.
“I got to the 14th green and seen the leaderboard, that was when I realised I was leading. It would have been nice to make one more on the way in as I gave myself some great chances today. I struck the ball really well, when you are in the lead on a Saturday afternoon its where you want to be so I was happy with how I handled myself coming in” added the Clara man.

Lowry is chasing his first win since the 2015 WGC Firestone invitational and knows what it takes to win a big event.
“The standard is so good out here and this golf course can offer up a low number. I am just going to go out and play my own game and see where that leaves me.
“If that leaves me coming up 18 with any sort of a lead that would be great. I am looking forward to getting out there tomorrow and getting after it.”
“It’s been a while since I’ve won, so I can’t really remember what it was like. I just have to get out there tomorrow and play my game and do what I do every day. If it’s good enough, it’s good enough. If it’s not, so be it and that’s the way it is.”

As a tournament invite, Harrington cannot make any progress in the Race to Dubai Rankings but a 16th European Tour win would move him into a tie for 14th on the all-time list.
The Stackstown man was obviously happy carding the lowest score of the day and his lowest of the season.
“There was just less stress, less pressure, and you go out there and hole a few putts and shoot 64 and everything is hunky-dory.”

“I got a lot of momentum in my round that I did not have yesterday, and I would love to have it there tomorrow but it is going to be much tougher when you have something on the line.
“So, there is no stress out there when you are way off the lead out there but then if I can be within shouting distance starting out Sunday then it will be a different way of playing golf when you would be a little more cautious about making mistakes.” 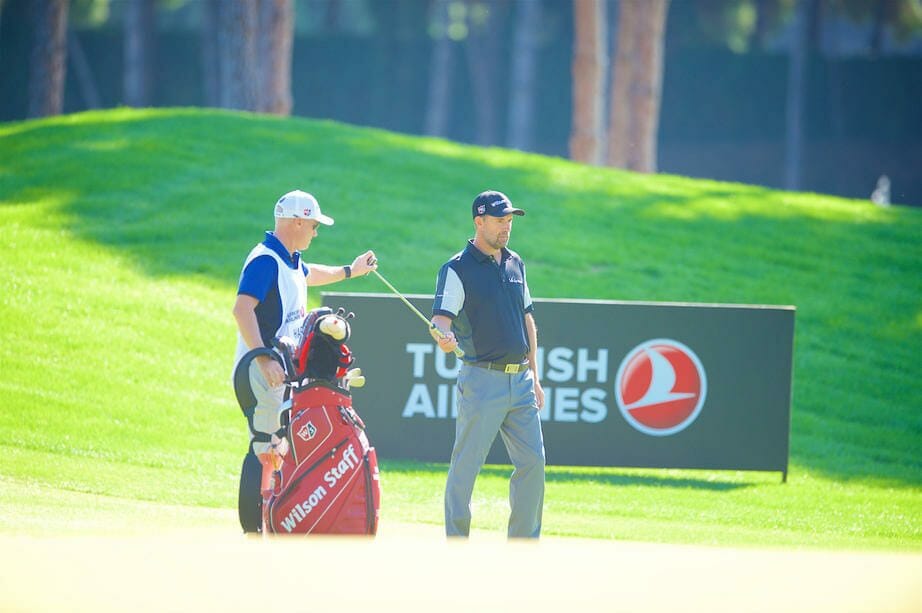 Paul Dunne carded a third round 67 to move up to a tie for 13th. Only five shots off the lead Dunne will be pushing for a big final day and improve on his Race to Dubai ranking of 14th ahead of the final two events of his season.

Lowry and Harrington  tee off at  8:31am Irish time tomorrow morning while Paul Dunne is off at 7:50am.