Seamus Power bounced back from a mid-round crisis to retain a share of third spot at the Sanderson Farms Championship in Mississippi.

The West Waterford professional finds himself six shots off the pace set by American Ryan Armour heading into the final round, but only a single shot off second and in a great position to get some FedEx Cup points on the board so early in the season.
The 30-year old’s third round 71 had no shortage of excitement either, eventually leaving him at nine-under-par for the tournament after a rollercoaster day in Jackson.

Having completed the final two holes of his second round early that morning, Power wasted little time in finding his groove in round three, opening with consecutive birdies to ignite his challenge. A ten foot par save on 6 kept up the momentum until the wheels momentarily came off without warning over his middle third.
He failed to get up and down at both 7 and 8 leading to two dropped shots before another short game blunder let another slip on 10. Now over par for the round, he wasn’t going to let a good week fade into obscurity, responding with a birdie at the par-5 11th before adding two more at 14 and 15.
He would’ve been frustrated by yet another clumsy bogey on 17 that dragged him back into single digits, but it’s been a fine week to date and one more round is all it’s missing.

He will have it all to do though if he is to catch runaway leader, Armour, who flew home in 31 for a special 67 and a five-shot lead. The American’s been feeling the cold this week but his golf has been anything but:
“It was cold,” he admitted. “I mean, when we got here it was cold this morning. Once you got moving, as long as you can keep blowing on your hands, everything is all right.

“If you have to stand still and the wind hits you and the sun goes behind the clouds it can cut right through you.”
But don’t think the weather’s getting him down: “Oh, I’m ecstatic. There was a tough stretch in the middle of the front nine there where in missed three 16 footers in a row.
“Hole locations were hard and tough to read. Kind of caught fire on the back nine there and made five birdies. I’m ecstatic.”
Power shares third place with Scott Strohmeyer (68), Beau Hossler (69), Ben Silverman (69) and Vaughn Taylor (71).

As we seen with Justin Rose’s unlikely victory at the WGC earlier today, anything can happen in the pressure of the final round of a golf tournament. The stage is set for a Power charge tonight. 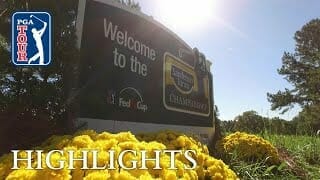