Moynihan & Sharvin on the march through the desert 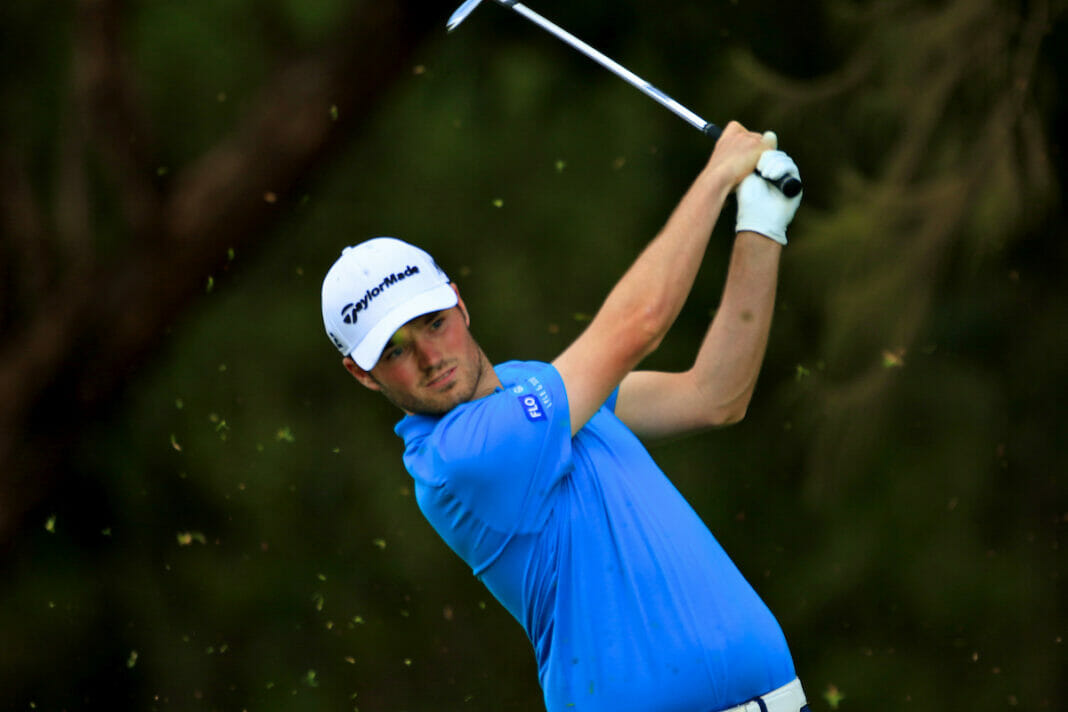 Moving day at the Rask Al Khaimah Golf Challenge and the Irish contenders are motoring through the desert like a gang of camels fleeing a bank robbery.

A four under par round of 68 has shot Gavin Moynihan into a tie for 4th on ten under par, just two shots off the pace, while just in behind the Dubliner lies Cormac Sharvin on nine under par after an impressive 69 took him into a share of 9th.

For Moynihan, it is the continuation of the form he’s shown all season that currently finds him in 26th spot on the Road to Oman rankings. His round oozed class too with a birdie at the first setting the tone for a day of seamless golf.

He added another at the par-5 3rd before parring to the turn in 34. The Island Golf Club product may have been quiet around the stretch but was always in control, eventually finding a gain at the reachable par-5 14th. And he took advantage of the gettable last hole too, a birdie four completing a bogey-free 68 that puts him in prime position ahead of a Saturday assault on a maiden Challenge Tour title.

The same can be said for Ardglass’ Sharvin who, despite enduring a bitterly frustrating season, could turn his whole year upside down with a win tomorrow. It wasn’t quite as complete a performance as Gavin’s today but there was some special golf nonetheless, the sort of stuff that Sharvin has always had hiding in the locker of late.

He traded birdies for bogeys at 1 and 2 and 5 and 6 before another gain at the 9th got him into the red for the day once more. That one he wasn’t going to give back however, as he added two more birdies at 11 and 12 to fly home in 34 for a 69 total. What a difference a week can make in golf. Let’s home Sharvin can muster one more strong round and we’ll see where it takes him.

Yet, it didn’t end there for the mightily impressive Irish performances on day three at Hamra Golf Club as Michael Hoey got in on the act with a blemish-free 69 of his own that moved him up fourteen places and into a tie for 34th.

The day wasn’t quite so good for Rosapenna’s Ruaidhri McGee who remains at one under par after staying still with a 72 on moving day, but it’s a weekend made regardless and a big day tomorrow makes it all the more worthwhile.

A closing birdie meant Chase Koepka remained the man to catch following the third round of the Rask Al Khaimah 2017 Golf Challenge, with the American taking a one-shot lead into the final day.

Scoring conditions favoured the early starters but Koepka, co-leading at the halfway point at Al Hamra GC and out last, kept grinding away to sign for a two under par round of 70 and reach 12 under par for the tournament, one ahead of Jens Dantorp and Christopher Mivis.

The Floridian has finished in the top five on five occasions already this season but, with European Tour status already assured for 2018, he has set his sights on signing off his Challenge Tour career with a maiden victory – and perhaps even the Road to Oman Rankings top spot.

“I really have no pressure on me,” said the 23 year old. “I don’t have to play for my card, like some guys might have to this week, but that still doesn’t mean that I’m going to lose my focus out there.

“I still want to win, I still want to be at the top of the Road to Oman at the end of the year and a ‘W’ would sure help me out on that.
“Today was a bit of a grind. I didn’t quite hit my long irons as well as I would have liked but at the end of the day, I’m still at the top of the leaderboard and shooting two under when not playing well gives me a lot of confidence going into tomorrow.

“The greens were quite firm and it seemed like a lot of the pins were quite tight. You needed to drive it well in the fairways and then have good distance control to get the ball close.

“I felt like it was hard for me to get the ball close and, even when I hit some really good putts, they didn’t seem to go in. But I managed my way around and if this is going to be my bad day, I’ll take it.”

Moving Day can often be when a player pulls clear of the field but today saw the chasing pack tighten up, with 23 players all within five shots of Koepka’s lead.

His playing partner tomorrow will be Dantorp, whose outstanding round of 65 saw him climb 22 places – with only the top 45 in the Rankings contesting the NBO Golf Classic Grand Final next week, this would be a timely good result for the Swede, who is currently in 48th place, should he continue his form in the final round.

Mivis already knows that his breakthrough season on the Challenge Tour will end in Muscat but, three times a top five finisher this year, he starts his bid for a maiden title just one shot back.

Poland’s Adrian Meronk led for much of the day having reached five under par for his round and 13 under par overall after 12 holes before late bogeys dropped him back into a share of fourth on ten under par.

Alongside him on that mark are Englishmen Max Orrin and Garrick Porteous, Moynihan and Adrien Saddier of France, but while Koepka remains in charge, it is perfectly set up for a dramatic conclusion in the UAE tomorrow.