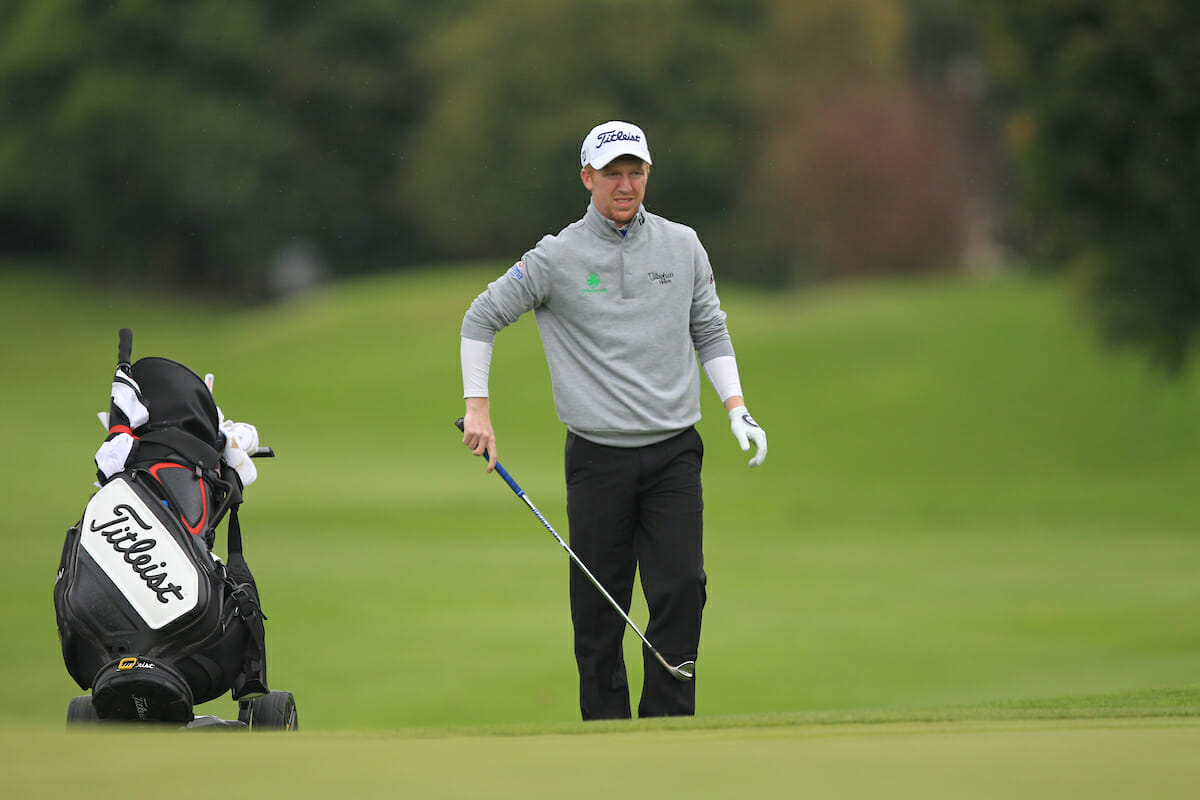 It was a good day for the Irish invaders in the UAE as both Gavin Moynihan and Cormac Sharvin moved up to a tie for 12th after round two of the Ras Al Khaimah Challenge.

Moynihan carded a second successive 69 while Sharvin eclipsed the Dubliner with a four under par round of 68 as the pair reached minus six, only four shots behind the leaders.

Gavin has clearly banished the demons of his final round 77 in China a week ago, flying out of the starting gate today with four birdies in his first six holes. And although the fireworks ended with the early birdie blitz, Moynihan has laid the foundation for a weekend assault on the title.

Sharvin has had a frustrating year by all accounts but showed no shortage of confidence in taking apart the Al Hamra track. Two gains mixed with two dropped shots had him dead even for his outward half before the Northern Irishman caught fire on the back nine, firing five birdies to be home in 32.

Also making it to the weekend is Ruaidhri McGee who sits in a tie for 48th on one under par. The Rosapenna professional bagged a shot of the day highlight reel two on the par-4 tenth on his way to a solid 70, and he is joined by seasoned pro Michael Hoey who got it into the red after a second round 71.

At the top of the leaderboard, Chase Koepka took a share of the lead just hours after his Major-winning brother Brooks sealed a one-shot advantage of his own at the WGC-HSBC Champions.

On another perfect day at Al Hamra, Chase – the younger of the two Koepkas – made five birdies in a four under par second round of 68 to move to ten under par, sharing the halfway lead with overnight leader Jurrian van der Vaart.

Brooks’ golfing journey also began on the Challenge Tour, with the American winning four times before graduating to the European Tour in 2013 – a feat that Chase is already certain to match, currently sitting in sixth place in the Road to Oman Rankings with just one tournament remaining after this week.

The one thing missing from Chase’s burgeoning CV at this early stage of his career is a victory – he lost in a play-off at last month’s Kazakhstan Open – but a maiden win in Ras Al Khaimah would also give him a chance of eclipsing his illustrious sibling by topping the Rankings, a feat that eluded Brooks.

“I’d love to top the Rankings,” said the 23 year old. “I think in order to do that I’ll need to win one of these last two events so that’s my goal. It’s been a great year anyway but if I can hopefully play well this weekend, I might be able to get that first win.

“I’d love to win. I was really looking forward to possibly getting that first victory in Kazakhstan – I actually didn’t get off to the greatest of starts there but I found my way into a play-off and it just didn’t quite happen.

“I feel like my game has been great for a while now. I missed the cut two weeks ago but I actually felt probably the best I’ve felt all season going into that week, which was quite strange.

“Then last week I thought I played my best golf of the year and I finished 20th, that’s just the way golf works I guess! But this week, nothing’s really changed, I’m still playing really good golf and now the scores are there too.

“I heard about Brooks’ round in China so I just wanted to make sure I made a birdie on the last hole to make sure I’m on top of the leaderboard as well!

“It’s a good day to be a golfer called Koepka, but there’s not too many bad days to be a Koepka! Certainly not this year anyway.”

This is Chase’s first full season on the Challenge Tour and though 2017 was the year Brooks, with victory at the U.S. Open, truly became a

Major player on the world golf scene, the younger Koepka has been highly impressive in his own right, securing five top five finishes already on the Road to Oman.

Van der Vaart matched his ten under par mark with three birdies in his closing five holes, the Dutchman in a very different position to his fellow leader coming into this week.

The 31 year old needed to rely on an invite to compete in the UAE and, 90 places below Koepka in the Rankings, needs a strong result if he is to make it into the top 45 and take part in next week’s season-ending NBO Golf Classic Grand Final.

One shot off the lead is Julien Guerrier, the Frenchman targeting a third victory of the season following his earlier triumphs in France and Ireland and yet to drop a shot over the first 36 holes of this tournament as he sits in third on nine under par.

Compatriot Adrien Saddier – three times a runner-up this year – is among those in a share of fourth place one shot further back, alongside Adrian Meronk, Christopher Mivis, Juan Sarasti, Oscar Stark and Jeff Winther.

Marcel Schneider fired the round of the day, a 64 that equalled the course record, while the cut fell at level par, with 66 players progressing to the final two rounds.