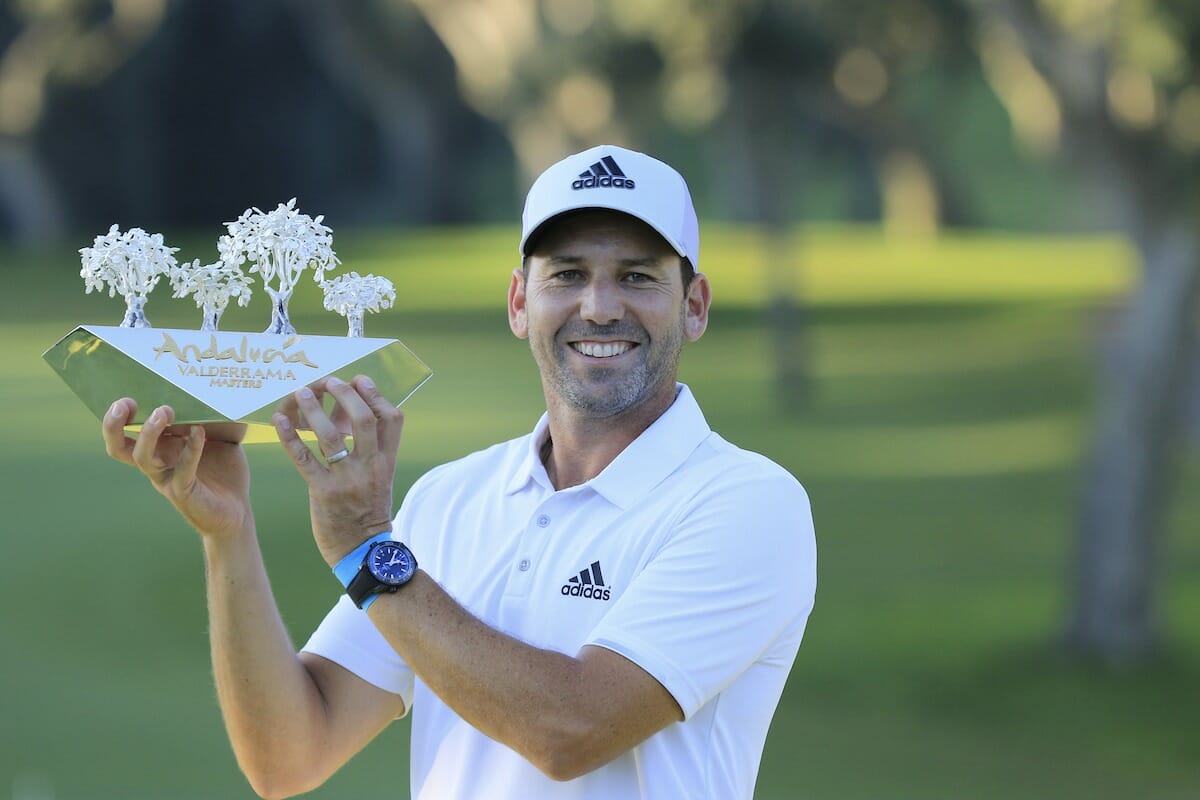 Sergio Garcia continued his love affair with Real Club Valderrama as he claimed a sixth European Tour win on Spanish soil at the Andalucia Valderrama Masters hosted by the Sergio Garcia Foundation.

The home hero won the last staging event of this event here in 2011 as he became the first Spaniard to win a European Tour stroke play tournament over the famous layout.
He has only finished outside the top ten once in 13 events here, with eight top fives, and a closing round of 67 moved him to 12 under and a one-shot win over Dutchman Joost Luiten.

The win is Garcia’s third of the season after he won his maiden Major Championship at the Masters Tournament to go with the Dubai Desert Classic, and closes the gap on Tommy Fleetwood at the top of the Race to Dubai Rankings presented by Rolex.
England’s Daniel Brooks was then at seven under, two shots clear of Welshman Jamie Donaldson and three ahead of Australia’s Wade Ormsby as all three men moved inside the top 101 in the Rankings to secure their playing privileges for next season.
For Luiten it was just a second top ten of the season but he has been a picture of consistency this term, making 18 of 22 cuts.

The headlines belong to Garcia, though, who became an Honorary Life Member of the European Tour on Friday night and is now a 14-time winner.
“It was amazing,” Garcia reflected afterwards. “All three of us played amazing. Daniel played great with everything that he had on the line. Joost played unbelievable. I played really well and I felt like maybe I could get away and he just kept coming back and back and made it an amazing match.
“I stayed patient the whole time, I made sure the bad moments did not affect me too much and made a couple of really key putts coming in.The people were unbelievable, amazing, so many people came out and supported, it was really a treat.
“I want to dedicate this one to my wife Angela and our little baby coming next year in March.”
Garcia holed a slippery one down the hill on the par five fourth to get to nine under but when Luiten hit a stunning approach to tap-in range on the fifth and put his tee-shot on the par-3 sixth to six feet for another birdie, he was just one off the lead.
It was advantage Luiten on the ninth when he put his approach close but Garcia holed with a five wood from the fringe with Luiten following him in as both men made birdies.

A 15-footer on the tenth made it a two-shot lead and Garcia took advantage of the par five 11th to go three ahead.
He bogeyed the par three 12th after finding sand off the tee while Luiten got up and down from the same position and, with the 31 year old holing a long putt for birdie after an excellent second from the rough on the next, the lead was down to one.
Luiten put an impressive tee-shot into the par three 15th to join the lead but a three-putt on the 16th meant Garcia had a one-shot lead with two to play with both men birdieing the 17th and parring the last.
A six-foot right-to-lefter on the second briefly had Brooks – who began the week in 123rd – in a share of the lead but when he dropped shots on the eighth and 11th, his card looked to once again be in danger.

He made an excellent up-and-down from the sand on the 12th for par but better was to come on the next. He sent his tee-shot left and had a bad lie and restricted swing but hit a brilliant hooked approach to make a birdie.

An excellent approach to the next then got him back into red numbers on the day and gave him a three-shot cushion over the next best players behind him, giving him the breathing space to bogey the 16th. and still move up to 97th.
Donaldson needed at least a top-eight finish to have chance to avoid going to Qualifying School or using his Career Money List exemption next season but a closing 71 saw him finish fourth and move from 118th to 99th.

He had two birdies and two bogeys with a double-bogey from Scott Jamieson on the 16th dropping the Scotsman out of a tie for fourth and helping Donaldson over the line.
Ormsby began the week 106th in the Race to Dubai but was well placed on the Access List and a closing 70 helped him up to a comfortable 82nd.

Anders Hansen finished alongside Jamieson at three under, a shot clear of Nino Bertasio, Aaron Rai, Robert Rock and Julian Suri.
Ashley Chesters went 69-68 over the weekend to finish at one under and make his way onto the Access List alongside Ricardo Gouveia who finished at one over.
Zander Lombard and Joël Stalter were the players to drop out of the Access List places.