Lowry & Harrington six back after day one in Valderrama

Two Irish main stays had similarly mixed fortunes on a sodden day one of the Andalucia Valderrama Masters hosted by the Sergio Garcia Foundation.

Both Padraig Harrington and Shane Lowry struggled to get to grips with the notoriously difficult layout on a frustrating day for the pair, who share in a tie for 39th on one over par after the opening exchanges.

Tipped by our own betting master, Donal ‘Doc’ Hughes, Lowry got off to an encouraging start for punters with a birdie at the first, but excitement was fleeting. Consecutive bogeys followed at 2 and 3 before another birdie three at the 5th threatened to settle Lowry into his round.

However another bogey at 7 dropped the Clara man into the negative once more as he made the turn in 36 wallops. His back nine was much more stress-free, a birdie on 11 swapped with a bogey on 16 as Shane remained at plus one for the tournament.

Still, there was enough on display to hint that Lowry’s game’s not all that far away, and he was similarly upbeat when speaking to Meridian Media’s, Denis Kirwan after the round.

“I played okay, but I struggled [off the tee],” Lowry explained. “I was starting my driver a little too far left, and around here you need to be very accurate off the tee.

“I played okay but playing with Sergio, what a day of golf he put on today. It was very impressive, and you can only stand back an admire that.

“People at home who have never played here don’t realise how tough this golf course is. To make five under look easy out there was very good. But listen, one over is not that bad. I think if you are hanging around par coming into Sunday, you will do alright in this tournament.”

Finding himself on the same number as Shane is Dubliner Harrington who had an equally stop-start round in terms of trying to build momentum.
Starting on the back nine, Padraig birdied the par-5 11th before two bogeys took him to the turn in 37. Another dropped shot on 1, his tenth, began to sway the seesaw towards unwanted territory but Harrington’s been around the block long enough not to panic.

A bounce-back birdie on 2 followed by another at 5 fired him back to level par, and although he would’ve hoped to finish the day in the red, unfortunately it went the other way with a bogey at the last – a fair reflection?

“I’m a little disappointed. All the bogeys could’ve been avoided. I actually hit some good shots on some of the holes that I bogeyed but if you’re just a fraction out at times in a gusting wind and it doesn’t blow… So yeah, the bogeys were disappointing. The birdies were nice, holed a few putts as well. Overall it felt like it should have been a level par, but not a 66 anyway so one over’s not the end of the world.”

“It’s a tough course. Even though the holes are short, and it is a short course, but every shot you’re just being a little bit wary and a little bit cautious. You never really open up on this golf course. So yeah, hanging in around level par seems like the plan but at some stage you’re going to have to make a few birdies. I’m sure by the end of the week it will be a 5 or 6 under par winning total.” 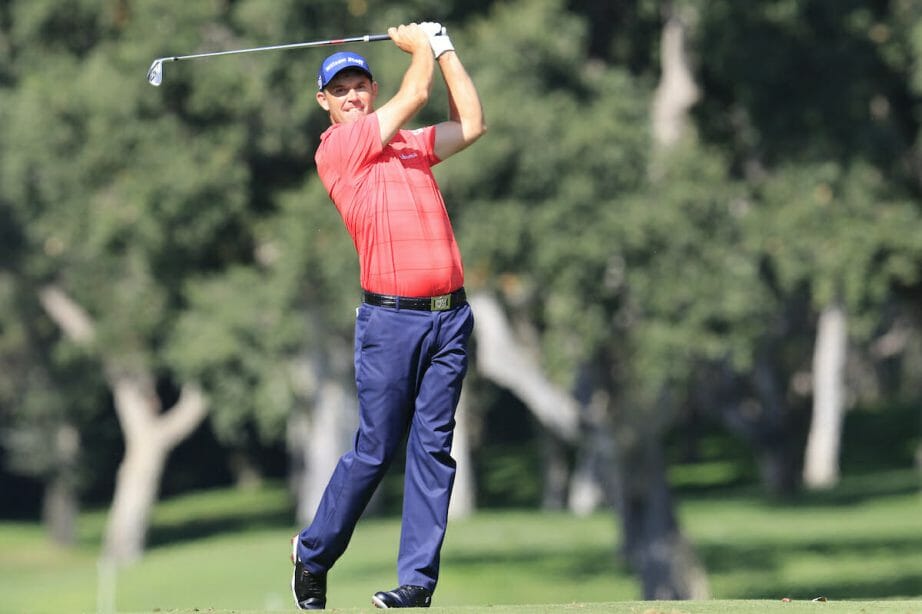 Harrington hitting his approach to the 7th on day one in Valderrama – Image By Eoin Clarke Golffile.ie

To the delight of the home crowd, host Sergio Garcia got off to the perfect start, moving into a share of the first round lead in front of his adoring fans.

The 37 year old is making his first appearance in his native land since claiming his maiden Major Championship title at the Masters Tournament in April and he delighted the home crowds upon his return with a five under par 66.

“It was nice. Unfortunately it was very wet after the rain yesterday and this morning but the course is still holding well. Towards the end of the round the ball wasn’t even picking up mud on a lot of the spots on the fairway. It’s the kind of golf course that only needs a little bit of sun and a little bit of wind and it dries up quickly. It was gettable because it was soft but you still had to hit good shots and I was able to do that for the most part of the day. I’m very happy with my round.

“The game was on pretty much all day. I hit my irons very well, I didn’t drive the ball well on the eighth hole but I was pretty much spot on there and I made some nice putts here and there. The greens were rolling quite fast, more than anything the back nine was even faster than the front. Overall I think it was very solid.

“It was nice to see so many people coming out even early in the morning and after all this rain, with all the kids.”

Indeed the round marked his best ever start on a Real Club Valderrama course upon which he has already enjoyed one victory and three runner-up finishes, and he was joined at the top by Joost Luiten of the Netherlands, who carded five birdies on the front nine – his back nine – en route to a 66.

Another local favourite and another pick of the Doc, Pablo Larrazábal, backed up Garcia’s home charge as he signed for a four under 67 to share second place with Englishman Robert Rock, while Andrew Johnston – who won on this course last year – was two shots further back in a share of sixth.

World Number Five Jon Rahm, meanwhile, got off to a disappointing start in his first professional appearance on home soil as he struggled to a three over par 74.